As Amazon considers tech hot spots across North America for its so-called HQ2, a more modest enterprise is departing Seattle and placing its bets on the entrepreneurial potential of Detroit, smack in the middle of America’s Rust Belt.

Ian Sefferman and Patrick Haig are hoping that their tech savvy and past startup success combined with the engineering and research talent already present in the Motor City and surrounding area will prove a winning combination and enable them to rev up Detroit’s startup community.

his summer, the duo are launching a startup studio called Assembler Labs. The studio will be a place to take new startup ideas — the two say they have dozens — and determine as quickly as possible whether the technology will work and if there is a customer base that wants it.

“We’re at ground zero,” Haig said. “We’re generating the ideas, validating them and moving from there.”

The two are traveling only halfway across the country to found Assembler Labs, but Seattle and Detroit are arguably worlds apart.

The amazing thing about Detroit is it sits in this five-hour, concentric circle of crazy talent and research.

Seattle is undergoing breakneck growth as a leader in the digital economy as Detroit tries to put the brakes on its contraction and reignite its economic sector. Seattle is predominantly white — 69 percent — and known for its less-than-welcoming “freeze” personality while Detroit, with an 80 percent black population, has a more Midwestern warmth. Houses cost 10 times more in Seattle. Detroit lags in education, with only 14 percent of city dwellers holding a bachelor’s degree or higher. Seattle is perched on the edge of the continental U.S. The city of Detroit sits just right of center.

But Sefferman, who is a Detroit native, and Haig are excited by what they see as the city’s untapped potential.

“The amazing thing about Detroit is it sits in this five-hour, concentric circle of crazy talent and research,” Sefferman said. He called out numerous universities within a five-hour drive of the city, including the University of Michigan, Michigan State, Notre Dame, Purdue, Carnegie Mellon and the University of Chicago — his own alma mater. 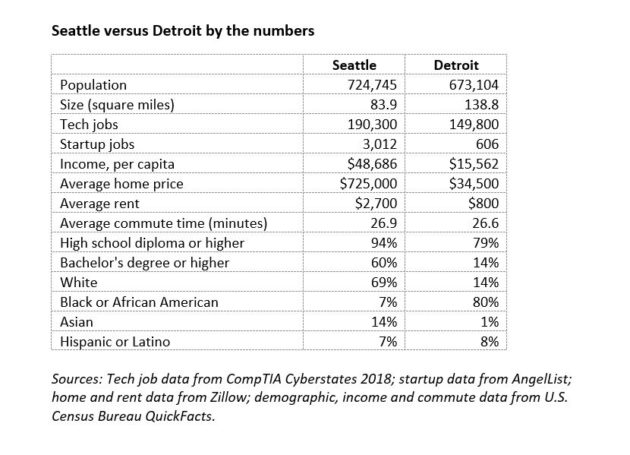 Despite decades of decline in the U.S. auto industry, Detroit claims a surprising number of technology jobs, including work in the auto business as well as companies like Quicken Loans, one of the nation’s largest retail mortgage lenders.

The city has nearly 150,000 tech jobs, while Seattle posts 190,000 employees in the sector, according to CompTIA’s 2018 Cyberstates report. But Seattle is way out in front in terms of new enterprises, with 3,102 startups to Detroit’s 606, based on numbers from AngelList.

“The startup ecosystem is still in its infancy in Detroit,” Haig said.

‘Roll up our sleeves’

Detroit has spent years trying to kickstart its own revival, promoting the city as a haven for artists, exploring casinos and stadiums for an economic boost and even building a complex called the Renaissance Center, which didn’t exactly live up to its name.

But after so many false starts, it appears that a Motown comeback is at last taking hold.

Last month Ford Motor announced that it was buying and restoring Detroit’s dilapidated Michigan Central Station, a long-abandoned office tower and train station. Ford says 2,500 of its employees will work in the rehabilitated space in a few year’s time. And eight years ago, Quicken Loans moved its headquarters from the suburbs into Detroit, bringing thousands of employees with it.

“The city is hungry for people who want to make stuff happen,” Sefferman said. He’s a strong believer in the grit and humility of the residents of Detroit, who have weathered years of downturn.

The city is hungry for people who want to make stuff happen.

“We’re ready to roll up our sleeves and get stuff done,” he said. Detroiters recognize that if they don’t take the initiative and make good things happen, no one else will.

That can-do-spirit was in full effect last fall when Amazon announced its search for a second headquarters, or HQ2. Detroit made a fevered pitch with Dan Gilbert, the Detroit billionaire who founded Quicken Loans and Rock Ventures, at the helm. He formed a 59-person committee of business leaders and politicians to craft an “Olympics-like bid” for HQ2.

Detroit didn’t make the cut for Amazon’s top 20 finalists, but that’s OK with Sefferman. This summer, Seattle leaders approved a head tax for large employers including Amazon that was earmarked to aid the city’s homeless population. The retail and cloud giant opposed the tax, and threatened to shutdown construction projects in Seattle. Elected leaders ultimately caved to Amazon and others.

“Detroit is a city with a long history of corrupt politics,” Sefferman said, “and I’m not sure we want to add businesses playing super hardball to the list.”

Detroit dangled $4 billion in incentives to try to lure Amazon’s HQ2 to its city. Sefferman and Haig will have to do their own hustling to get investments in their future companies. But they’re hopeful that the studio approach to launching businesses will draw out promising entrepreneurs.

“Starting a company is like jumping off a cliff with no support,” said Ben Gilbert, co-founder of Pioneer Square Labs, an established Seattle-based startup studio and venture capital fund. “This is a great sort of risk-mitigated path to do it.”

Sefferman and Haig said they opted for the studio approach over an accelerator or incubator given the city’s less robust startup community.

“Accelerators and incubators can be helpful if the ecosystem is already producing a decent amount of startups that need support in their fledgling days,” Haig said. “Our thesis, however, is that that isn’t necessarily the case in Detroit.”

The Assembler Labs founders bring their own skill sets to Detroit: Sefferman is strong in engineering, while Haig is focused on product, customer development, design and user experience. They’ll need to find others to join their validation team, as well as identify leaders to become the founders of startup ideas that show promise.

The studio model “unlocks entrepreneurial talent that wouldn’t otherwise be unlocked,” Gilbert said. “It’s a super new model, so I think that it’s cool that they’re trying it in other geographies.”

The Assembler Labs duo said they expect 90 percent of their ideas won’t survive their validation process. Their goal is to be vetting two to three ideas at a time, and they aim to spin out six companies in three years. The two expect to draw some outside talent, in addition to recruiting locally. Sefferman and Haig hope that their studio could be a flickering tech night light that attracts former Detroit residents back home.

“Every Detroiter loves Detroit,” Sefferman said. “There are people across the country — in New York, Chicago, San Francisco or wherever — who left and want to come back here. We’re helping to give them part of that opportunity.”