PITTSBURGH — Janera Solomon was raised in Pittsburgh from the age of 10, and left after college to pursue a career in arts management before returning home in 2007. For nearly a decade, she has run the Kelly-Strayhorn Theater in Pittsburgh’s East Liberty neighborhood. She aspires to make the performing arts center a dynamic blend of the changing city, serving not just longtime residents but also the newcomers transforming this community.

It hasn’t been easy. But she isn’t giving up.

East Liberty is historically a predominantly African-American neighborhood, with a history of triumphs and struggles. In recent years, it has become home to a large Google office and an influx of tech workers, with new restaurants, hotels, apartments, bars and shops.

In the midst of all that change, Solomon wants the Kelly-Strayhorn Theater to serve as an example of inclusion — with people from all walks of life gathering there to learn from one another and take part in the community together.

“We’ve been trying to figure that out. It’s hard,” she said. “The Google folks, I can’t get them to come to the theater. I’ve tried. We’ve offered tickets — our tickets are ‘pay what makes you happy,’ anyone can come! But they’re like, ‘Well, can you do a show for us at Google Pittsburgh?’ And we’re like, ‘We have a theater five blocks away.’ So that’s still challenging. But the intentions have been expressed.”

Solomon said there is a segment of the tech community that’s in tune with the need to feel more connected to the greater East Liberty community — to volunteer, sit on boards and just be active citizens in the neighborhood. Language learning company Duolingo, just up the street, has reached out, as have others, she said.

But the story of the Kelly-Strayhorn Theater, and East Liberty’s transformation, illustrate the challenges faced by communities across the country as new economic opportunities arrive. With Pittsburgh among the remaining 20 cities in Amazon’s search for its second headquarters, it’s a small example of the change that could impact whichever community the tech giant chooses.

A landmark of many lives

Originally known as the Regent Theater, the building opened on Penn Avenue in Pittsburgh in 1914. The historic movie house closed for the first time in the 1950s, and through the years it was brought back to life several times, only to fall dark again and again.

In 2001, the theater was revitalized, reopened and renamed the Kelly-Strayhorn, in honor of dancer Gene Kelly and composer Billy Strayhorn, who were both East Liberty natives. The theater became a community hub for the arts, including theater, dance, music, film and more.

“I was very reluctant to come back here,” Solomon said of her return to Pittsburgh in 2007. “I just didn’t know what I would do here. I had a great college experience at the University of Pittsburgh, and I had lots of friends and connections, and there was a really great community of creatives and entrepreneurs that I was a part of. But my world had opened up.”

Her longtime home had changed, as well.

Solomon smiles as she talks about the East Liberty of her youth, recalling the long-gone dance clubs and the after-hours spots, the African restaurants, the sneaker shops, street vendors and more. But she also smiles during many of her descriptions of the neighborhood today. East Liberty is home to Bakery Square and Google, Whole Foods, Target, modern architecture and many other newer developments.

“There are lots of things that are really great, where I’m like, ‘Oh, I’m so glad we changed that,'” Solomon said. “I think the way we talk about Pittsburgh has changed and improved. There are more people from different places and there are more people who are traveling to other places, so we’ve brought some critical review into the way we think about our city, where we’re like, ‘Oh, you know, we’re great, but we could be better at X, Y and Z.'”

On Saturday walks with her daughter to a nearby coffee shop, Solomon sees Pittsburgh’s evolving story in a nutshell. Young tech workers, whom she jokes about being able to easily identify in their “uniforms,” mingle in a variety of spaces with equally identifiable native Pittsburghers.

What I would like to see us do is respect what’s there, respect what is authentic or local.

“That neighborhood that he was talking about and that he represented on all those shows didn’t have people only going out to fancy restaurants and living in nice, well-lit apartments and going to gyms,” she said.

At the theater, the struggle is to bring all of those different types of people together.

Giving tech a grade on interacting

The importance of getting involved is not lost on Pittsburgh’s tech leaders.

“When it comes to things like really getting to interact with the local neighborhoods of existing folks, I would like to see us do better,” said Andrew Moore, who started Google’s Pittsburgh office in 2006, and left to become dean of Carnegie Mellon University’s School of Computer Science in 2014.

There’s no reason we shouldn’t have all of these new folks using [the theater] to interact with the community.

Moore gives techies a B- or C+ on interacting with the community in Pittsburgh overall. While many people and companies are to be commended for doing great outreach to local school districts and showing kids a path forward, he said, there’s more to it than that. And he cited the theater as an example.

“The Kelly-Strayhorn Theater has been there the whole time, and the sad thing is I would characterize it as pretty much the same group of folks who are going to take part in cultural events now, when in fact there’s no reason we shouldn’t have all of these new folks using that to interact with the community.”

Pittsburgh Mayor Bill Peduto echoed that sentiment. As the city’s tech community continues to grow, tech workers “need to be a part of the community, and they need to be a contributing part of it,” Peduto said in an interview with GeekWire.

“We had a gang war going through the ’90s into the 2000s where East Liberty led the city in homicide,” Peduto said, recalling an incident in which his own car was stolen and used in a shooting. “We had people fleeing the neighborhood, moving out of the neighborhood, not moving in. And these were low-income, moderate-income African American families that were leaving East Liberty.”

Peduto, who had just met with Solomon on the day we interviewed him, noted that the theater’s lease runs until 2029. “What happens after 2029?” he asked. “Especially as the neighborhood market continues to grow?” He said that’s why it is important for everyone — including the tech community — to be involved.

‘Tensions sitting side by side’

The theater and the Alloy Studios class and performance space that it operates are separated by a few blocks on Penn Avenue. The roadway runs through the neighborhood and several others before eventually leaving downtown, crossing the Monongahela River, turning into an expressway and heading for Ohio. Along this avenue, empty storefronts sit alongside hip new restaurants and other businesses that have moved in — a familiar picture in many cities.

“I think Penn Avenue is probably one of the best examples of the tensions sitting side by side,” Solomon said. “If you keep going down the avenue, you’ll see. There’s no formal movement, but there’s a group of us all around here on the Avenue and around the Avenue who like what we have now. By realtor standards, it’s messy, it’s definitely not cookie-cutter. It’s definitely not easy to sell, because it’s not homogenous. But we like that.” 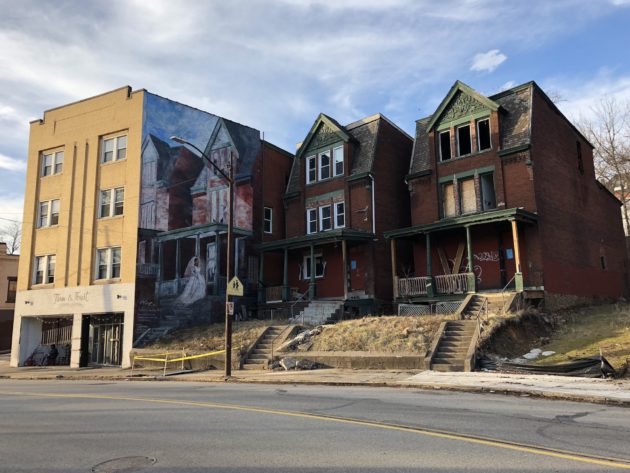 Solomon said she has lots of friends who are developers, some of whom tell her that the improvements they’re making are a benefit to the city. And that Google Pittsburgh would not be working out of a previously shuttered, 100-year-old Nabisco factory if it wasn’t for development.

She gets it. Economic development is vital to communities.

But she also doesn’t want to see Pittsburgh just bring “random things” from other cities and “plop them down.”

“What I would like to see us do is respect what’s there, respect what is authentic or local,” Solomon said. “Even in these communities where we’re like, ‘There’s nothing there, we’re going to bring something.’ Let’s just stop that narrative. There’s always something there. What’s there that we can celebrate and include in whatever the new idea is?”

The Pittsburgh Post-Gazette newspaper wrote just last week about one such business, with a profile on Bat’s Barber Shop and the owner’s hope to survive dramatic changes in the neighborhood.

In the local coffee shop, Solomon appreciates that the baristas don’t stress out over long lines. As she sees it, they’re there to somehow, on some small scale, keep Pittsburgh real.

“They’re like, ‘Hey, how you doin’ today? So what’s going on?'” Solomon said. “That to me, that’s culture. It’s a certain kind of defiance I guess. We’re gonna stick to who we are … and welcome people in.”

The goal is to make the Kelly-Strayhorn that welcoming place, to serve as a location that entertains as well as informs people who are new to the neighborhood. Solomon said the work they do at the theater contributes to a “mixing” that is intended to make sure that people are getting out of their bubble.

The theater and the Alloy Studios space sit on opposite ends of an expansive block which once held the Penn Plaza apartment complex, a flashpoint in the debate over development and displacement.

Residents were moved out, the buildings were demolished and last fall the City of Pittsburgh settled a court dispute with a realty company over the fate of the land. There have been disagreements over the desire for affordable housing on the site, and along the way Whole Foods has been in, then out, and maybe back in as an anchor tenant.

I asked Solomon what she would build on the giant corner lot.

“That’s a really good question,” she said, looking out the window toward Penn Avenue and envisioning an arts and retail mixture. “We have a lot of stuff being made here in Pittsburgh, and it could be cool to see what it looks like to buy their stuff on this Avenue, and have them there maybe even making it. I feel like as I’m walking down the street it’d be nice to add that experience,”

The housing component is also important to her, especially when it comes to who can still live in East Liberty and be a part of this wave of growth.

“I want to see more housing opportunities for people who are activists and social workers and educators and just making sure that we have spaces that they can live in. I think the people who are contributing to our social well-being shouldn’t be forced to move out to the suburbs because it’s becoming more expensive to live in the city. Teachers, cops … you know. Regular people.”