Haiku Deck’s roller coaster startup journey — which included a mobile game featuring Sir Mix-A-Lot and an award-winning presentation app — came to an end on Tuesday as the Seattle startup announced its acquisition by BookRags, a Seattle company that provides online teaching and learning guides.

It’s been quite the ride for Haiku Deck CEO and co-founder Adam Tratt, who helped launch the startup in 2011 as a social game developer called Giant Thinkwell. That celebrity-powered idea drew headlines and cache, but couldn’t scale.

The company quickly pivoted to a social video consumer site, but that also didn’t have enough traction. With a shutdown in sight, the startup made one final crucial pivot into something entirely different: an easy-to-use presentation app for the iPad called Haiku Deck. 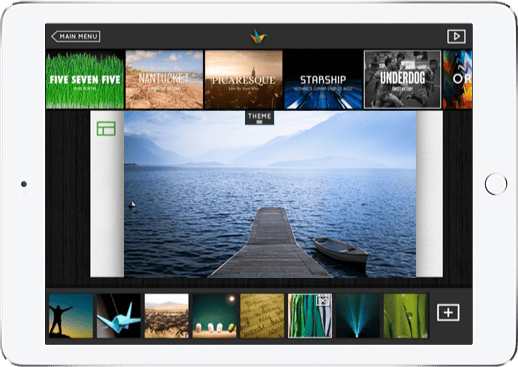 Billed as an alternative to Microsoft’s PowerPoint presentation builder, the Haiku Deck app garnered millions of users and recognition from the Wall Street Journal. It won App of the Year at the 2013 GeekWire Awards and helped the company raise more investment from top venture capitalists. Haiku Deck eventually rolled out to smartphones and desktop.

Having a clear purpose and strong product vision is the most important factor in overcoming the obstacles that startup teams encounter.

Over the past few years, Haiku Deck’s employee count dropped but the company stayed alive. And now it has a new owner in BookRags, which was founded in 1999 and offers a bevy of literature-related education curriculum. Haiku Deck will continue to exist, with BookRags investing in the technology. One employee from HaikuDeck is joining BookRags.

Tratt, a former Cranium executive, told GeekWire on Tuesday that he’s taking some time off before looking for new opportunities in early 2019. He said one of the biggest entrepreneurial lessons from Haiku Deck is “that having a clear purpose and strong product vision is the most important factor in overcoming the obstacles that startup teams encounter.”

“Once we started to focus on making it 10X faster for people to create presentations that are 10X more beautiful, we gained tremendous focus and acceleration,” he added.

Haiku Deck faced competition from giants such as Microsoft PowerPoint and Google Slides. Other similar startups include Prezi, Slides, Swipe, SlideShare, and Canva.

Haiku Deck raised more than $4 million from investors such as Madrona Venture Group, Founder’s Co-op, and Techstars, which hosted the company in its Seattle accelerator program in 2010.