They grew up together, worked at the same family business as teenagers, and have both become household names in the Seattle community. But the Hanauer brothers also couldn’t be more different with how they’ve approached business, life, and civic engagement.

That juxtaposition was on full display at The Playbook, a new speaker series hosted by GeekWire that brings together some of Seattle’s top minds, innovators and iconoclastic thinkers to share the secrets to their success, while also recounting the biggest hurdles they’ve overcome.

Related: One of Amazon’s earliest investors has this advice for winning HQ2 city

Adrian and Nick Hanauer joined us on stage Wednesday evening at The Ninety in Seattle where they talked about lessons from the soccer pitch to the boardroom and everything in between.

Both have enjoyed immense business success — Nick as a co-founder of aQuantive and venture capital firm Second Avenue Partners, and Adrian as an angel investor and majority owner of the Seattle Sounders FC. But they’ve gone about doing so in their own respective ways.

“Nick was a center-back and looked for contact,” Adrian said, using a soccer analogy. “I was a very clever, crafty midfielder who tried to avoid contact at all turns. Nick is definitely out there as a full contact participant in everything he does. I’m a little lower profile.” 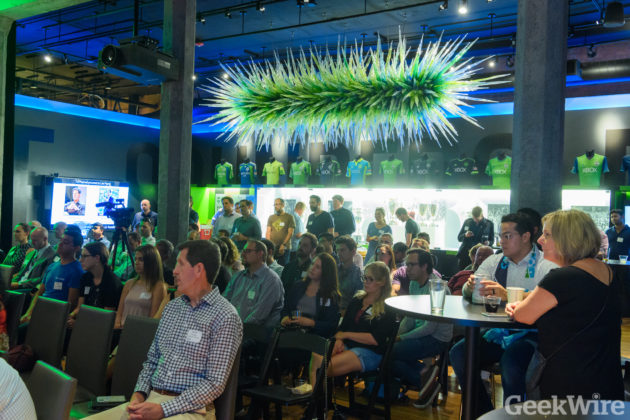 Read on for more takeaways from the conversation at The Playbook. You can watch the full interview at the video below. Big thanks to our partners at Lane Powell for helping make this inaugural event happen.

On not being an asshole (4:20 in video): While he is admittedly more aggressive than his brother — see his Twitter account — Nick said Adrian is “no less maniacally focused on the stuff that he cares about.” He also lauded Adrian’s leadership qualities as professional sports franchise owner.

“He’s not a self-aggrandizing egomaniac, which in that business is super rare,” Nick said. “It gives you a massive advantage because you’re not antagonizing everyone and doing damage control all the time.”

Added Nick: “Don’t be an asshole, because it works, apparently. Who knew?”

On business lessons from poker (13:40): “You can learn almost everything you need to learn about strategy playing good Texas No Limit Hold ‘Em,” Nick said. Adrian, who is a frequent poker player, said there are lessons about “discipline, patience, pot odds, and reading people.”

“Plan A is easy. Good organizations are able to pivot and have a good Plan B.”

On failure (18:00): Nick said there is a difference between “real failures” and the more common “setbacks” that entrepreneurs and everyone else experience throughout life — ones that he believes people can and should be able to bounce back from. “When it’s over, it’s over, and you’re just like, next thing,” Nick said.

For Adrian, it took some time to learn how to deal with failures and turn them into opportunities. He’s learned to handle setbacks by acknowledging them and having a solid backup plan.

“Plan A is easy,” Adrian said, quoting a fellow sports industry leader. “Good organizations are able to pivot and have a good Plan B.”

On Jeff Bezos (27:00): “He’s for sure the smartest person I’ve ever worked directly with,” said Nick, an early investor in Amazon.com. “He is a remarkable entrepreneur. I wouldn’t say I’m a great fan of his moral reasoning, but he’s an extraordinary commercial entrepreneur and a deeply insightful and strategic thinker.”

On why Nick gets inspired to engage in civic action, such as campaigning for the $15 minimum wage or gun control, when he doesn’t have to (30:00): “What you learn when you go into the civic space is that business problems are simple problems … in the civic world, problems are infinitely more complex,” he said. “I just find it more interesting. A lot of people are like, ‘it’s so frustrating.’ That frustration you feel is the feeling the brain makes when it comes up against actually hard problems. I find it just enormously satisfying.”

Adrian added that his brother is “unbelievably creative, open-minded, and absolutely has no connection to the herd.” Nick said humans were evolved to “be part of the crowd.”

“I just didn’t get that gene,” he said. “I am super comfortable being the only person in a room to believe one thing and everybody believes in another. I drove my teachers crazy when I was younger and I was a bane to my parents. I just didn’t need to do what other people did or thought — and that frees you. I don’t think I’m more creative, but it frees you to not just to not think what other people think.”