PITTSBURGH — Far before humans understood the basics of modern medicine, our immune systems protected our bodies from microscopic invaders and battled deadly diseases. Now, scientists in the emerging field of immunotherapy are using advanced science and engineering to turn the immune system into a tool that can solve some of humanity’s most pressing health problems.

UPMC will largely fund and operate the center. The University of Pittsburgh, or Pitt as it’s known, will renovate a 200,000-square-foot building at 5000 Baum Blvd. in Pittsburgh to house labs, offices, and eventually startups and industry partners for the center.

More than 200 community leaders and officials gathered for the announcement at the building on the border of Pittsburgh’s Shadyside and Bloomfield neighborhoods today.

“We are here today to announce not only the latest collaboration between Pitt and UPMC, but also the creation of a transformative partnership,” said University of Pittsburgh Chancellor Patrick Gallagher.

Dr. Steve Shapiro, UPMC’s chief medical and scientific officer, told GeekWire that the goal of the center is to help UPMC and Pitt researchers turn their work into viable commercial products. He described the $200 million as a “venture fund” that will seed those ideas and quickly develop them inside the institutions, instead of going through lengthy grant funding and external commercialization processes.

“We would like [researchers] to turn their scientific breakthroughs into clinical programs and commercial products with urgency,” Shapiro said, “and we want them to be able to do that within the confines of the university and UPMC.”

Mark Shlomchik, chair of Pitt’s Department of Immunology, emphasized the importance of creating a scientific and commercial community to help immunotherapy thrive in Pittsburgh.

“Research is always done by a community, not just by one person, so our ability to bring them together in this one place, where they can really interact and collaborate, I think is going to bring a lot of synergy to the research,” he said in a statement. “The potential there is great for putting researchers next to incubator companies and small companies so that we can much more quickly and immediately take things that we learn in the lab and start the process of developing them and bringing them to patients.”

The center has an extraordinary number of ties to Pittsburgh’s vibrant life sciences industry and the city’s rich history of innovation, starting with its focus on transplantation science. Pittsburgh was home to Dr. Thomas Starzl, the “father of transplantation,” and a lineage of researchers whose work on the immune system revolutionized organ transplants over half a century.

Another focus for the center is cancer treatments, likely the most well-researched application of immunotherapies to date. Seattle is home to groundbreaking research in cancer immunotherapy, notably a kind of treatment called CAR T immunotherapy. That treatment takes T-cells from a patient’s immune system — the cells that hunt down and kill bugs like the common cold — and genetically reprograms them to find and destroy cancer.

Seattle researchers are also pioneering this frontier. Fred Hutchinson Cancer Research Center and Seattle Children’s Research Institute are both leaders in developing CAR T science. Juno Therapeutics, a Seattle-based Fred Hutch spinout, is among the top CAR T biotechnology companies in the country. Last month, it reached a deal to be acquired by Celgene for $9 billion.

Immunotherapies, and particularly CAR T therapies, are not without risk. Last year, Juno was forced to pull its most advanced treatment after five patients died in a clinical trial from side effects, and CAR T scientists are still working to understand the full effects of the treatments.

Cancer care and transplantation science are fairly typical targets for immunotherapy research, but perhaps the most unique element of ITTC is its third scientific focus: Aging.

The aging population of the U.S., and of Allegheny County in particular, is one driver for this focus. The median age in the U.S. has been rising steadily, from 35.3 years old to 37.9 years old between 2000 and 2016. The median age in Pittsburgh’s home county is 41 years old, noticeably higher than the nation’s average.

Shapiro said health challenges around aging are a central part of the health system and are only becoming more important.

“Really, medicine is all about aging. Most of the care that we’re delivering to people is in the Medicare and the senior population,” Shapiro said. “We think that it’s great to try and treat cancer and it’s great to try and treat all these diseases, but perhaps we can make even more of a difference if we slow down the aging process and allow people to live, not necessarily a longer lifespan… but a longer health span, that is, the portion of their life where they’re healthy.”

“We think this is a goal that we should be doing throughout medicine — it’s perhaps the most important thing we could do,” he said.

ITTC will also draw on Pittsburgh’s recent efforts to turn its research and academic prowess into industry successes. UPMC, Pitt and the state of Pennsylvania have all had a hand in creating new commercialization engines and incubators to encourage startup creation in the past fifteen years, and the Pittsburgh life sciences industry is thriving as a result.

Speaking at Tuesday’s event, UPMC President Jeffrey Romoff noted a Brookings Institute report that lauded Pittsburgh’s intellectual capital in fields like medicine and education, but critiqued the region’s ability to turn those ideas into economic growth. Some refer to this as the “valley of death.” Romoff said ITTC will produce “not only cures, not only immunotherapies, but it will bring multi-billion dollar economic development.”

Gallagher added: “We won’t have a ‘valley of death’ here in Pittsburgh because of this partnership.”

“Innovation, partnership — they are in our DNA,” said Allegheny County Executive Rich Fitzgerald. “We roll up our sleeves, get to work, and create the next generation and next best thing that’s coming. I can’t think of a better place it’s going to happen than right here at 5000 Baum.”

The building chosen to house the center has a unique history — it was originally built by Ford and opened in 1915 as a Model T assembly plant and showroom. The plant closed in 1932 and has since housed a few other companies, most recently a Papermart party supply store. UPMC bought the building for $10 million in 2010 and initially planned to renovate it as part of the UPMC Center for Innovative Science, which morphed into the ITTC over the years. 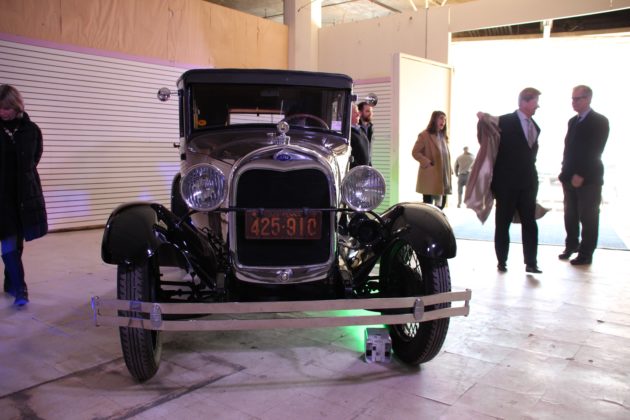 Pittsburgh Mayor Bill Peduto also spoke at Tuesday’s event. Peduto, familiar with the history of the 5000 Baum building given his work in the area as a city councilmember, looked at one hand and said: “A global center of innovation and research that will forever change the field of medicine,” then looked at his other hand and said “Or, Papermart,” as the crowd laughed at his comparison.

Peduto called the building a “lynchpin of an entire corridor that connects all of these communities.” He said the new developments will lead to “jobs for everyone — not just the Ph.D — but the GED as well.”

The building’s renovation is part of an ongoing partnership announced this month called InnovatePGH. The partnership is working to develop an innovation district in the Oakland neighborhood near UPMC, Pitt and Carnegie Mellon University, all of whom are taking part in the project. The project and UPMC’s dramatic expansion in that neighborhood have left some residents concerned about all the sudden change at the hands of large institutions.

Story by GeekWire’s Clare McGrane in Seattle, with additional reporting by Taylor Soper in Pittsburgh.