GeekWire took an exclusive hard-hat tour this week inside The Bill & Melinda Gates Center for Computer Science & Engineering, a new $110 million building that will open to students and faculty in January.

Construction workers are making final installations to the 135,000 square-foot building that will double the size of the UW’s nationally-ranked computer science program.

The building will house 16 labs; two 100-person classrooms; a 250-person auditorium; three seminar rooms, an event space; communal and study spaces, office and support spaces; a robotics lab; and a makerspace. It will help the UW meet growing demand for computer science, which has become the top first-choice major for incoming freshman.

Ed Lazowska, a professor of computer science who helped lead fundraising efforts, said the department is now enrolling 480 new undergrad students annually, up from 170 just a few years ago. 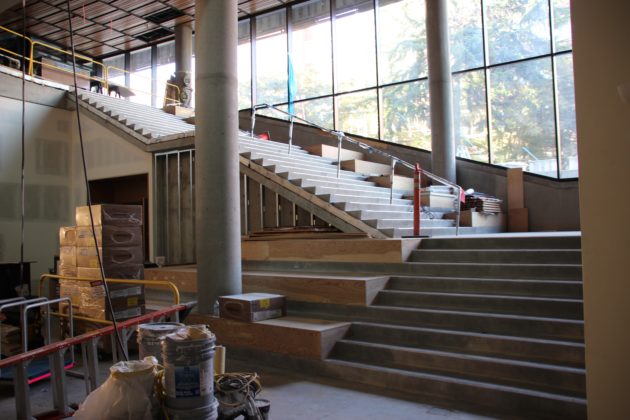 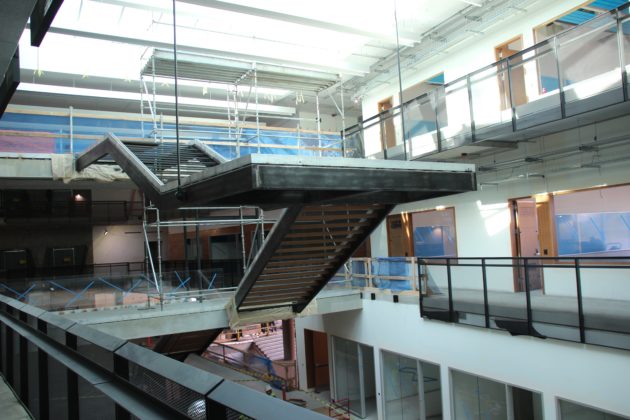 Microsoft, Amazon, Google, and Zillow also contributed to the construction costs, in addition to funds from the university and state. More than half — $70 million — of the funding for the building came from private donors. The state provided $32.5 million and the UW put $9 million toward the building.

The new building sits directly across the street from the Paul G. Allen Center for Computer Science & Engineering, which opened in 2003 thanks in part to a $14 million donation from Allen himself, who co-founded Microsoft with Gates in 1975. The same architect, contractor, construction manager, and fundraising team that helped make the Allen Center a reality are also working on the new building.

In the decade since Allen helped open the current UW CSE building, the demand for computer science graduates has skyrocketed in the Seattle region, thanks to a strong startup ecosystem, Amazon’s rapid growth, and the opening of Seattle-area engineering offices by Google, Facebook, and many other tech companies based outside the region. About 90 percent of UW CSE graduates remain in-state after completing their degree.

The UW’s computer science school was renamed the “Paul G. Allen School of Computer Science & Engineering” earlier this year after Allen donated another $40 million to the UW.