Microsoft finished off a record fiscal year by hitting all-time highs for both revenue and profit in its fourth quarter.

Microsoft reported earnings of $1.13 per share on $30.1 billion in revenue, a 17 percent rise over a year ago, beating Wall Street expectations once again. Microsoft topped $110 billion in revenue for the year, up 14 percent from the year before, passing the $100 billion mark for the first time.

In the fourth quarter, Microsoft posted net profits of $8.8 billion, a rise of 35 percent over a year ago. The company made $30.3 billion in net profits for the year, but also took a charge of $13.7 billion related to new federal tax laws. Taking that into account, Microsoft’s net profits shrank to a paltry $16.6 billion.

Analysts surveyed in advance by Yahoo Finance expect Microsoft to post earnings of $1.08 on $29.2 billion in revenue. Microsoft hasn’t failed to meet or exceed Wall Street’s expectations since April 2016. 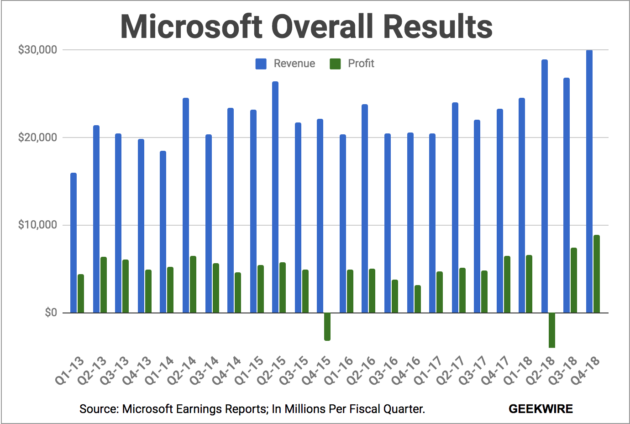 “We had an incredible year, surpassing $100 billion in revenue as a result of our teams’ relentless focus on customer success and the trust customers are placing in Microsoft,” CEO Satya Nadella said in a statement. “Our early investments in the intelligent cloud and intelligent edge are paying off, and we will continue to expand our reach in large and growing markets with differentiated innovation.” 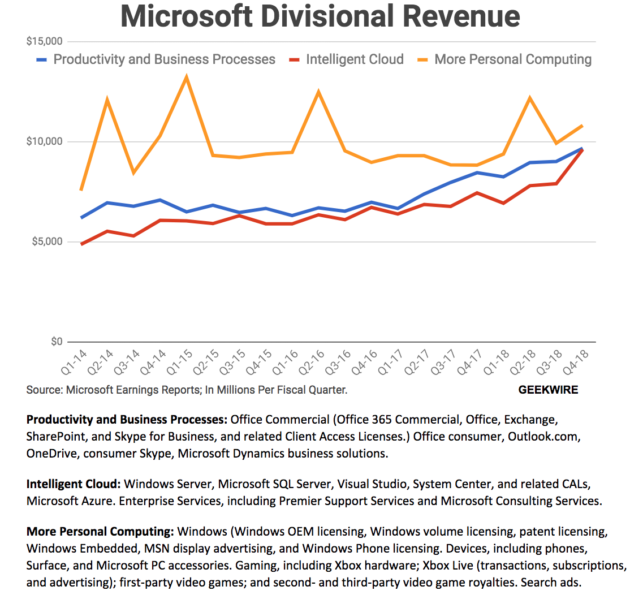 Surface followed up a strong third quarter, with another big annual jump of 25 percent to $1.1. billion in revenue for the fourth. Even though Microsoft didn’t release any new devices this quarter, the company has put out a number of Surface gadgets in recent months and sales are still going strong. 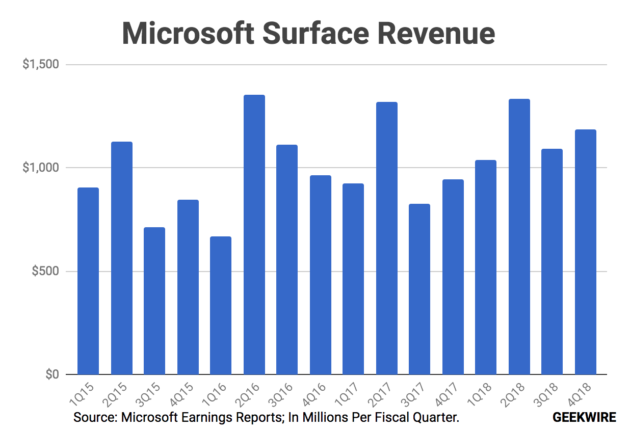 On the gaming side, which includes everything from Xbox hardware to Xbox Live subscriptions to revenue from games made by Microsoft as well as other studios, the company reported its first ever $10 billion year. Gaming revenue grew 39 percent over a year ago to nearly $2.29 billion. Xbox Live subscriptions actually declined this quarter, from 59 million in Q3 to 57 million, but that figure is still up over a year ago.

The biggest news of the quarter was Microsoft’s $7.5 billion acquisition of GitHub. Microsoft made a couple other acquisitions in the last few months, scooping up San Francisco startup Bonsai to bolster its machine learning and artificial intelligence offerings and edtech startup Flipgrid.

A couple big events fell in the most recent quarter. At the Microsoft Build developer conference in May, the company announced a new partnership with drone maker DJI, showed off the very first integrations between its digital assistant Cortana and its Amazon counterpart Alexa and doubled down on its IoT vision.

At E3 in June, Microsoft announced it had acquired four game studios and created a new one. The company also revealed that it is working on the next generation Xbox console, and a new entry into the vaunted Halo franchise is on the way.