Microsoft’s cloud division remains one of the primary architects of its comeback in recent years, posting a 23 percent jump in revenue during the fourth quarter of its 2018 fiscal year and ending the year having contributed $32 billion in revenue.

RELATED: Microsoft posts record $110B in revenue for the year, cruising past Wall Street expectations again

The Intelligent Cloud division posted revenue of $9.6 billion during the three-month period ending June 30th, with Azure growth of 89 percent during the quarter. Commercial cloud revenue, a key metric for Microsoft CEO Satya Nadella over the past year that includes some business-to-business software products that fall into the Productivity and Business Processes unit, was up 53 percent compared to the same period last year at $6.9 billion. 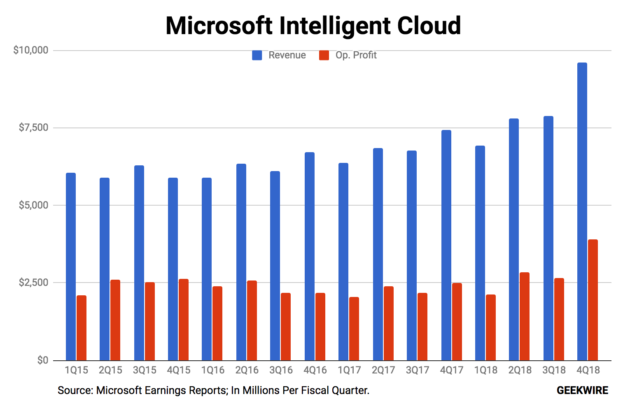 Microsoft continued to disappoint those looking for more solid guidance around Azure revenue, which hopefully it plans to address in the 2019 fiscal year. Azure revenue growth dipped below the 90 percent mark for the first time in a while, but 89 percent growth is still very good. The company did note that the $1.8 billion increase in Intelligent Cloud revenue was driven almost exclusively by Azure and server software designed for on-premises data centers, and one of those two products is growing a lot faster than the other.

Azure is increasingly seeing what Nadella called “tier-one workloads” on a conference call following the release of the results. In the early days of cloud, big companies were hesitant to move their most important applications to cloud services, but things have changed, he said.

Microsoft is the first of the big cloud companies to report earnings from the June quarter, with Amazon and Google scheduled to report their latest results next week. The company signed a few notable cloud deals with the U.S. intelligence community and travel giant Sabre during the quarter, and reorganized its cloud team to bring in more artificial intelligence talent and Windows development under Scott Guthrie, executive vice president of the Microsoft Cloud and Enterprise group.

Cloud computing is a very capital-intensive business, given all the investments required in data centers and equipment. The company invested $4.1 billion in capital expenditures during the quarter, said Amy Hood, chief financial officer, and a total of $13.6 billion for the fiscal year.

Hood expects the capital expenditures growth rate to decrease slightly as the company moves through its 2019 fiscal year, but Microsoft will still spend billions in order to keep up with rivals like AWS and Google.