Microsoft has agreed to pay $7.5 billion in stock to acquire GitHub, giving the Redmond tech giant new inroads to more than 28 million software developers who use the popular software development platform and coding community.

It’s the third-largest deal in Microsoft history, behind its $26 billion purchase of LinkedIn and $8.5 billion acquisition of Skype. The news, announced Monday morning, confirms reports that first surfaced last week and escalated over the weekend.

The deal requires regulatory approval. Microsoft’s Nat Friedman, the former CEO of Xamarin, the mobile app development platform acquired by Microsoft in 2016, will take over as GitHub CEO. Chris Wanstrath, the GitHub co-founder and former CEO, will join Microsoft as a technical fellow. Both will report to Microsoft Cloud + AI leader Scott Guthrie.

Immediately upon announcing the deal, Microsoft sought to assure users that GitHub “will operate independently to provide an open platform for all developers in all industries,” addressing concerns about the possibility of Microsoft using the acquisition to give itself an unfair advantage or change how GitHub operates.

In a blog post, Microsoft CEO Satya Nadella identified three “clear opportunities” in the combination of the companies, providing a glimpse into Microsoft’s motivations. In addition to keeping GitHub a central part of the software developer community, he said the deal “will accelerate enterprise developers’ use of GitHub, with our direct sales and partner channels and access to Microsoft’s global cloud infrastructure and services” and will help “bring Microsoft’s developer tools and services to new audiences.”

But the company has changed its approach to open source software under Nadella, after battling Linux and other open source projects for much of its history. The success of the deal will hinge in part on the willingness of developers to take the company at its word.

“We have been on a journey with open source, and today we are active in the open source ecosystem, we contribute to open source projects, and some of our most vibrant developer tools and frameworks are open source,” Nadella wrote. “When it comes to our commitment to open source, judge us by the actions we have taken in the recent past, our actions today, and in the future.”

Nadella added on a conference call with analysts and investors, “We are committed to being stewards of the GitHub community.”

Another question is how Google and Amazon Web Services will react to the news. Both are GitHub users and Microsoft cloud rivals. In its investor slide deck about the acquisition, Microsoft referenced the use of GitHub by those companies in a graphic. 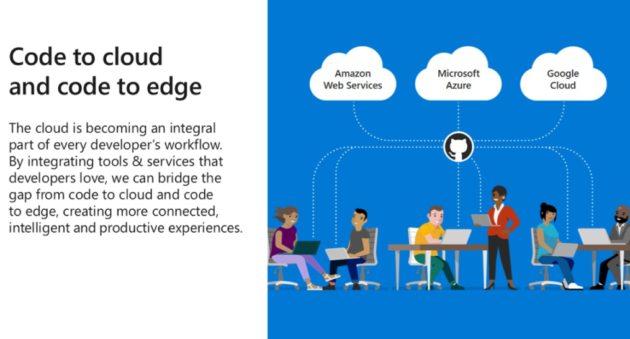 Also on the conference call, GitHub’s Wanstrath said Microsoft’s acquisitions of LinkedIn and Minecraft parent Mojang helped to convince GitHub’s leadership that the Redmond company is serious about bringing aboard new businesses while allowing them to maintain their independence and identity.

“We both believe GitHub needs to remain an open platform for all developers,” Wanstrath said in a blog post. “No matter your language, stack, platform, cloud, or license, GitHub will continue to be your home—the best place for software creation, collaboration, and discovery.”

Microsoft stock is up slightly on the news in early trading, after closing above $100/share for the first time last week. The company has more than $132 billion in cash and short-term investments, but its soaring stock price gives the company even more flexibility to fund its big moves, as evidenced by this all-stock deal.

The acquisition requires regulatory approval in the U.S. and European Union. Amy Hood, Microsoft’s chief financial officer, said on the conference call that the companies are confident the deal will be approved this calendar year.

“This makes Microsoft more of a one stop shop for developers,” said tech industry analyst Patrick Moorhead of Moor Insights & Strategy. “While developers can use any cloud, tools or services, I’m sure we will see easy developer access to Azure services and Visual Studio integration in the future. This is a very good move for Microsoft as it has targeted more than any company, multi platform developers.”

Asked if there’s a risk of developers abandoning GitHub in large numbers, Moorhead said that depends on whether Microsoft truly keeps GitHub independently. “If it operates separately like LinkedIn I think we will see developers stay. If it’s integrated like Xamarin, they risk losing some, but I don’t see that happening.”