Founded in 2016, Invio develops FDA-compliant cloud-based software that automates clinical trial workflows, replacing the traditional paper and binder method of recording data. The company is working with three U.S. research sites and plans to add another 20 clients in the coming months. 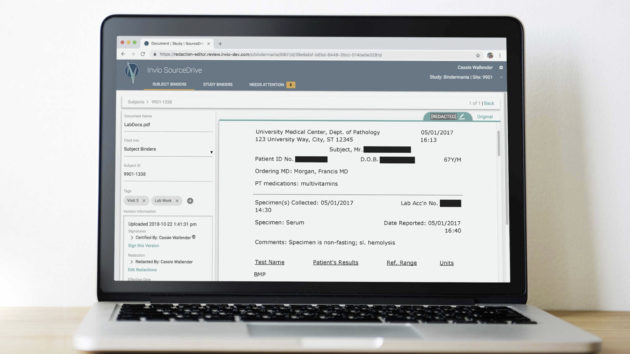 Poppa helped come up with the idea for Invio after he was running a clinical trial at 40 different hospitals for another Seattle-area company. He had to fly team members to each hospital every six weeks to review data in 3-ring binders.

“We have a vision for not just digital and remote trial management, but a mission to automate the busy work out of clinical trials,” said Wallender, who pitched at the GeekWire Summit last month. “Trials are offering us the best scientific advances humanity can muster — they should be supported by the latest and greatest technology in machine learning and AI to drive not just efficiencies like cost and time savings, but also patient safety.”

Launched in 2014, Madrona Venture Labs takes ideas and turns them into startups by way of recruiting, product development, financial investment, and more. Earlier this year, it announced the 3-month accelerator, which will mimic the studio but with a focus on already-established teams that align with its core focus on machine learning and artificial intelligence.

Mike Fridgen, CEO of Madrona Venture Labs, said his team has picked two other companies for the accelerator, in addition to Invio. He said there were more 200 applications.

“Invio’s mission to revolutionize the clinical trials process by automating workflows and by providing intelligent insights through data and machine learning was a great fit,” he said. “And, by doing this, Invio improves the safety of trials and decreases the time to market for important life-saving treatments. We believe in the founding team and the impact their product will have on patients.”

Accelerator companies receive a $100,000 investment and office space at Create33, the new “founder center” underneath Madrona Venture Group’s downtown Seattle office where Labs is based. There will be two cohorts per year. Labs is accepting applications for another set of companies that will start early next year.