Madrona Venture Labs has spun out its third company: A startup called Essential that helps businesses communicate with customers via text messaging, Facebook Messenger and other platforms, using intelligent messaging technologies such as chatbots. 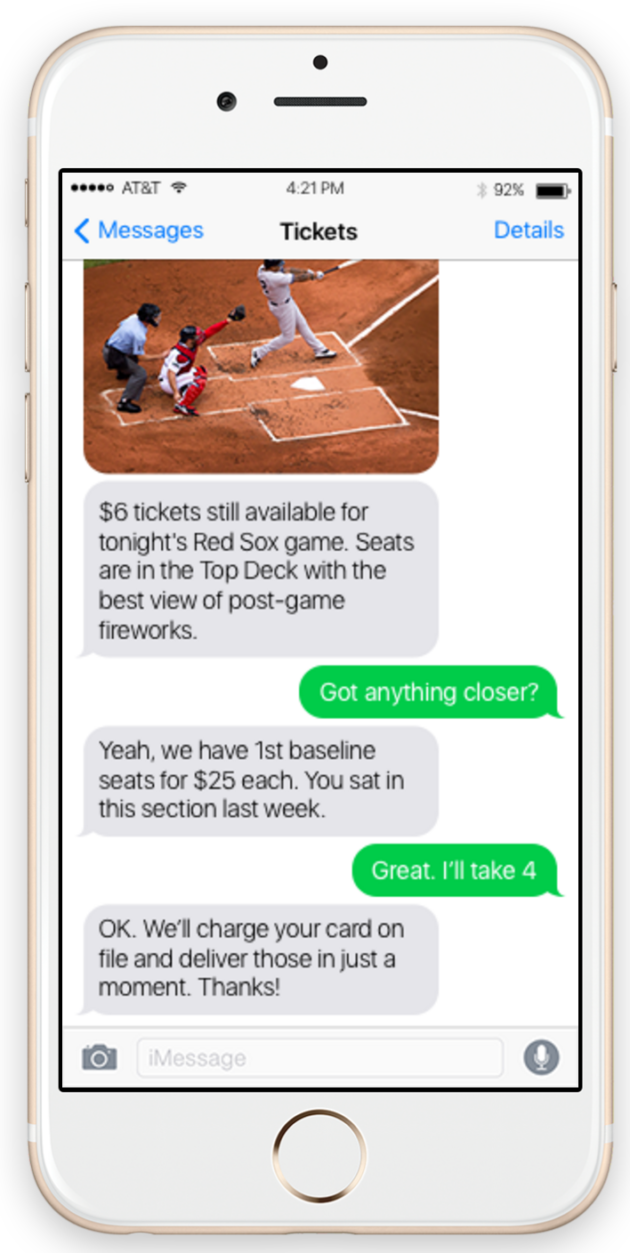 Mike Fridgen, CEO at Madrona Labs, said commerce through text and Facebook messages, rather than over the phone or by going to websites, is a focal point for Madrona Labs and its parent company Madrona Venture Group. There are plenty of companies in the messaging space, but Essential executives say their product stands out because it has a plug-and-play quality to it.

“Many of the companies in the market today are providing what we call ingredients for developers, where developers are building bots from the ground up,” Fridgen said. “What we’ve found, the customers we are talking to need solutions, they need our guidance on how to enter the market what types of user experiences will drive material results for their customers.”

So far, Essential has landed customers like fellow Madrona Labs spinout ReplyYes, event ticketing marketplace SeatGeek and meal delivery service Peach. SeatGeek uses Essential to alert fans of available seats to their favorite team’s next game. Peach uses it to send messages alerting customers which restaurants it is delivering from on a given day.

As it begins to branch out from Madrona Labs, Essential is in the middle of raising its first round of funding. Madrona Venture Group is an investor, but Fridgen would not say how much the company is putting in. Essential will use the money in part to build up its engineering team

Essential is led by veterans of the local tech scene: CEO Mike McMurray, Vice President of Engineering Daniel Pirone and Vice President of Product Zoe Schagrin. McMurray has been a senior vice president at PointInside and general manager at RealNetworks. Pirone previously held senior engineer positions at at Madrona-backed Qumulo and Nuance Communications. Schagrin was previously a senior product manager at Amazon and a founder and CEO of an early-stage startup. Several Madrona Labs staffers will continue to work with Essential until the company fills out its engineering team.

McMurray said in an interview with GeekWire that working with Madrona Labs helped Essential build a strong foundation for its products that will hold up as the company grows. McMurray said the company wants to help companies talk to their customers through a variety of platforms.

“If you are a brand trying to deal with both the complexity and nuance of interacting with customers on different channels — whether it be SMS, or Facebook Messenger or Slack — really understanding the difference and how you approach and communicate with customers in an honest and straight forward way is not an easy problem to solve,” said McMurray.

Formed in 2014, Madrona Venture Labs calls itself a “startup studio,” with a goal of helping spin out new startup ideas quickly, taking those ideas from “napkin to traction.” The firm has spun out two other companies after incubating the concepts: Spare5 and ReplyYes.

The concept behind Madrona Venture Labs is similar to Pioneer Square Labs, a startup studio formed last year by Greg Gottesman, Mike Galgon, Ben Gilbert and Geoff Entress. Gottesman lead Madrona Labs in its early days, worked for a number of years as a partner at Madrona Venture Group, and now serves as a venture partner at the firm.