Micah Baldwin answers quickly when asked about the vision for Create33, a new “founder center” opening next month on the floor below Madrona Venture Group’s downtown Seattle office.

“The greatest companies in the region will have rubbed shoulders,” he predicted. “All the founders will know each other and be friendly. It’ll be known as a place to come if you want to learn how to be the best founder and the best leader you can possibly be.”

Create33 aims to be an epicenter of the Seattle startup ecosystem where budding entrepreneurs can learn from mentors and network with peers. It’s the brainchild of Madrona Venture Group, one of the largest venture capital firms in the Pacific Northwest.

Madrona is placing a big bet on the concept, inking a 10-year lease on the 22,000 square-foot space below its existing 34th-floor office at the Wells Fargo Center. Baldwin, a serial entrepreneur and angel investor who previously led a startup program at Amazon, is the executive director.

It’s part of our strategy to help grow the ecosystem to help people become better founders.

GeekWire took a tour of Create33 last week with Baldwin and Madrona Managing Director Scott Jacobson to learn more about the new space, which includes co-working desks, 24 conference rooms, an event space, a production studio, startup training rooms and a kitchen. It’s similar to WeWork or Galvanize, but unique given that it was created by a 23-year-old venture capital firm.

“There is not another entity I am aware of, without a profit motive, whose principal goal is to increase the slugging percentage for entrepreneurs/founders in Seattle, conceived of and being built by people who have a strong track record of success as investors, company-builders, founders, connectors, etc.,” Jacobson said.

A staircase connects Madrona’s office down to Create33, but its leaders are keen to create a degree of separation between the firm and the new center. Jacobson said Madrona is the “largest supporter” of Create33 given the money, time, and energy it is investing.

“But I really don’t think of it as part of Madrona,” said Jacobson, whose firm raised a $300 million fund in May. “It’s part of our strategy to help grow the ecosystem to help people become better founders.” He later added that “every time we’ve made investments in the ecosystem, it’s worked out.”

Despite the stated altruism, and efforts to separate the venture capital arm from this new initiative, Madrona has a lot to gain by positioning itself as a hub for entrepreneurial activity.

If the firm — an early backer of companies such as Redfin, Impinj, Smartsheet and Isilon — can help foster connections and startup formation, it could be the beneficiary of seeding the next crop of great Seattle startups. After all, with Create33 just a few steps from Madrona’s offices, and its millions of dollars, it could be a natural place for entrepreneurs to seek capital. In that regard, Madrona could get an early peek at deal flow.

“You have to invest in building relationships and showing value long before you want to write a check,” said Jacobson, who also sees the new venture as a bet on the Seattle region.

“The stronger the entrepreneurs that are based here, the better our business will be,” he later added.

The idea behind Create33 is similar to Pioneer Square Labs — a Seattle-based “startup studio” launched in 2015 by former Madrona managing director Greg Gottesman and others that in April raised a $80 million fund. Madrona is a backer of Pioneer Square Labs, which like Create33 also is trying to jumpstart startup activity in the Seattle area by forming tight connections between entrepreneurs, engineers, marketers and financiers.

Both theorize that beyond the existing local startups, there are hundreds of would-be Seattle-based entrepreneurs locked inside giants like Amazon, Microsoft, Google, and Facebook who want to launch a company. Create33 intends to be an onramp of sorts where that can happen — not just as a potential investment opportunity, but also for other startup resources and connections.

We’re hoping that Create33 becomes part of that nexus where there’s just a constant flow of folks coming in and out, drinking our coffee, meeting each other, having a good time, and really thinking about the smart ways of growing.

“If I’m at Amazon and thinking about leaving to start a company, why can’t I start it in Seattle?” Baldwin noted. “If you follow that path, what’s the next thing they need? A place to actually start it that isn’t just tables and chairs, but a supportive network of people that will help them get to where they have to go.”

The rise of these new startup spaces — whether dubbed a “studio” or “founder center” — speaks to a new chapter in venture capital. Thirty years ago, venture capital was dominated by buttoned-up financiers — essentially check writers who’d hammer out terms of the deal and then wait for a return. Today, the role of the venture capitalist is evolving, with firms needing to provide more value to the startup — everything from recruiting to PR to engineering assistance.

It’s the idea of smart money vs. dumb money.

Over the past few decades, there have been attempts by venture capital firms to create similar startup factory-like centers within their own walls. Seattle-based iStartVentures opened a 16,000 square-foot incubator in Pioneer Square in the late 90s, but went out of business after the dot-com boom. CMGI, another well-known incubator, crumbled in the early 2000s.

Can Create33 succeed where those entities failed?

Baldwin thinks so. He said the new venture is less about being another co-working space, accelerator, or incubator and more about creating a 24/7/365 “nexus” for the larger Seattle tech ecosystem. A majority of people will join as drop-in or community members, including those from out of town, he said.

The larger goal is to have Create33 be a “perpetual motion machine” of tech startup creation. Baldwin, who spent most of his tech career as an entrepreneur and investor in Silicon Valley, said the Bay Area is unique for the density of founders and startup folks.

“That doesn’t exist as much up here as it could,” he said of Seattle. “We’re hoping that Create33 becomes part of that nexus where there’s just a constant flow of folks coming in and out, drinking our coffee, meeting each other, having a good time, and really thinking about the smart ways of growing.”

In an added twist, Create33 will offer several levels of membership.

It expects 10-to-15 early-stage startups — some of which will be Madrona portfolio companies — to work permanently from the co-working desks and have access to the center’s programming. For example, Madrona Venture Labs, a startup studio backed by Madrona, is already working out of Create33 and will house its new accelerator there.

There are already a bevy of co-working spaces in Seattle, many of which continue to expand. WeWork, which already has five locations in the region, is doubling its Seattle-area footprint this year. Others include Galvanize, The Riveter, Thinkspace, and CoMotion Labs, which has co-working space at the University of Washington’s Fluke Hall, CoMotion HQ, and Startup Hall, where the Founders Co-op venture capital firm is also based. 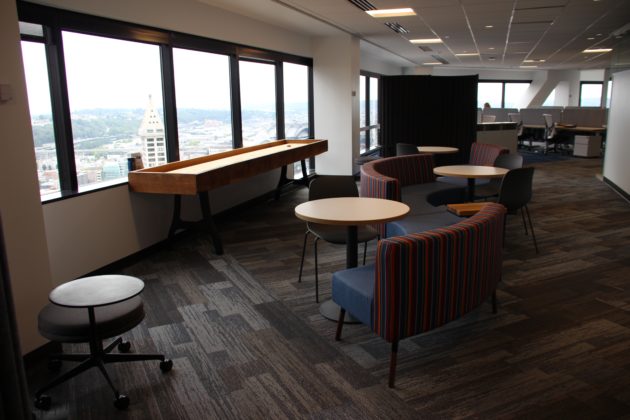 Another pillar of Create33 is to amplify the Seattle region as the best place to start a company. It’s a way to recruit more entrepreneurs and startup talent to the city.

Jacobson said that a decade ago, people from cities such as San Francisco or New York worried about where they would work if their startup failed in Seattle. But now the ecosystem boasts more than 100 Silicon Valley engineering centers, in addition to growing local tech giants and startups.

The weather’s better here. And there is no state income tax.

“It’s not that risky,” he said. “The weather’s better here. And there is no state income tax.”

There’s a lot about the Silicon Valley environment that Jacobson and Baldwin want Seattle to adopt: more founders, more successful tech companies, more entrepreneurial energy. But they are also aware of Seattle’s advantages.

“When I moved up here, you start peeling the onion back and you’re like, gosh, the weather’s not that bad, people are actually not that bad — there’s a lot of really good stuff going on here,” Baldwin said. “And by the way, there’s this massively bustling ecosystem that isn’t the Bay Area where everyone is talking about tech 24 hours a day and everybody worries about money and there’s all these pressures that exist.

“Those don’t exist here. People are actually being innovative and thoughtful and trying to come up with interesting solutions to really difficult problems. And I wanted to surround myself by those people.” 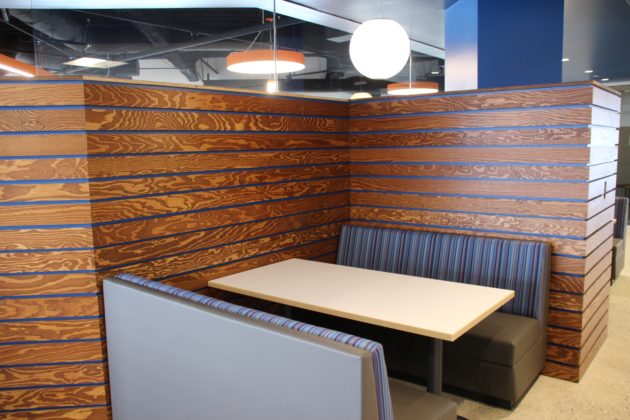 Baldwin hopes Create33 becomes a place where founders don’t have to feel lonely.

“We talk about what’s coming five years from now,” he said. “It’s that people start companies here because they’re not alone and they have a group to do it with. They may not succeed, because these things don’t always succeed, but at least they won’t do it alone. That’s a very important aspect of what we’re building here that’s not self-evident.”