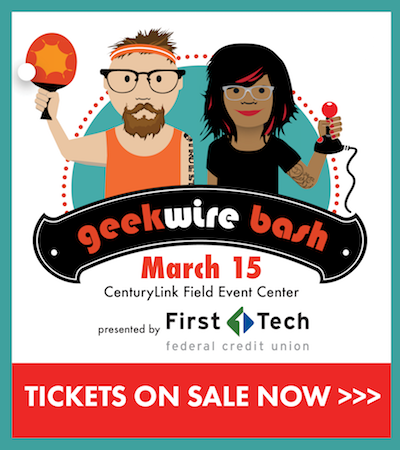 Yes, it’s once again time for the GeekWire Anniversary Bash, taking place from 3 p.m. to 9 p.m. on March 15th at the CenturyLink Field Event Center. GeekWire is turning seven in March — and we’re celebrating in the best way we know how: Hosting one of the biggest ping pong, dodgeball and video game extravaganzas on the West Coast. Early-bird tickets are on sale now here, including tickets to the ping pong, foosball, dodgeball and Settlers of Catan tournaments.

Think about it like the Winter Olympics … for geeks. Old and new rivalries are born at the Bash, but at the end of the day it is really just a fun party for members of the tech community to connect and share a beverage or two. A few fun surprises are in store this year, and you might even catch a celebrity sighting.

The dodgeball court has become an especially fun clash of the tech titans at the Bash, highlighted by an intense rivalry match last year between real estate powerhouses Redfin and Zillow. On the dodgeball court this year, we’ll have a few changes. Teams must have an even split of men and women, and we’re also introducing a consolation bracket in order to extend game play for teams who are eliminated in the first round.

If you’re not interested in participating in one of the organized tournaments, don’t worry. We’ve got a host of fun activities in store that will fulfill your inner geekiness, from virtual reality to video games to a fun new interactive geek ball game.

Last year, more than 1,500 people attended the Bash (see highlights here), and we’re expecting an even bigger crowd this year with new activities. We hope you’ll come celebrate with us on March 15th!

A big thanks to this year’s title sponsor: First Tech Federal Credit Union. Also, thanks to Moz, the photo booth sponsor; Bellevue College, a ping pong tournament table sponsor; and XiamenAir, which is sponsoring the zipline experience at the Bash.