SAP has expanded its partnership with the San Francisco 49ers, rolling out a new venue management product this season called Executive Huddle that features a multi-screen dashboard surfacing real-time data related to parking, bathrooms, concessions, ticketing, and more as 70,000 people come through the gates at Levi’s Stadium to watch an NFL game. San Francisco is the first NFL team to use the new tech.

GeekWire last week got a behind-the-scenes look inside the Executive Huddle suite at Levi’s Stadium, one of the most high-tech sporting facilities in the world that opened in 2014. SAP originally inked a deal with the team in 2012 as a founding partner of the 1.85 million square-foot building and is the 49ers’ exclusive business software partner.

The room is lined with flat-screen TVs that show live data from nine different software platforms, such as tickets being scanned or concessions purchased at various locations throughout the venue. SAP’s Executive Huddle software, based on SAP Leonardo and its cloud and analytics products, is the conduit that ingests data from various APIs and presents it in an easy-to-digest format.

The view of the field is not too shabby, either.

The suite is an air traffic control center of sorts, where 49ers executives and stadium operations managers monitor the various feeds during a game and relay information to the 3,500 employees on the ground who can immediately make appropriate changes while the game is ongoing. That’s a change from years past, when the team would go through pages of reports during the week after a game, versus making changes on the fly.

“This is not incremental growth,” said Moon Javaid, a former private equity associate who is now vice president of business strategy and analytics with the 49ers. “Going from being reactive to real-time — a complete different set of possibilities open up for us.”

For example, the live parking lot data can show imbalance between different areas as more than 15,000 cars descend upon Levi’s Stadium on Sundays. Javaid’s team can advise the parking manager to redirect traffic flow in real time, versus assessing that information a day later. Or, the concession data can help spot which of the stadium’s 600 concession or retail points of sale need more food or workers. And fan responses from the HappyOrNot kiosks outside 50-plus bathrooms can highlight dirty facilities that need immediate attention. 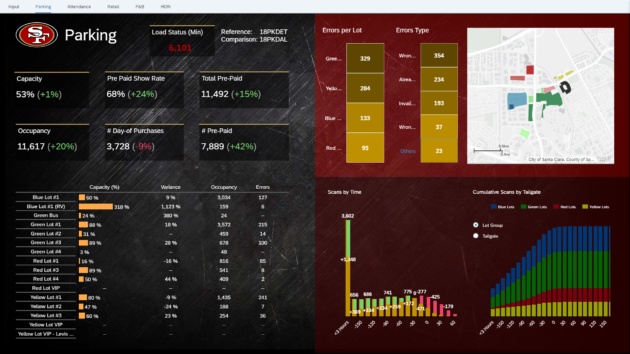 The data can be benchmarked against previous games and correlated with what’s happening on the field. It’s also accessible via mobile, in addition to the Executive Huddle suite. The team said it is already decreasing wait times at gates by using the data to redirect fans to less-crowded areas.

The difference between acting in real-time versus hours or days after a game can make or break a fan’s experience. This has become more and more important for sports franchises as the at-home experience continues to be attractive — a comfortable living room with home-cooked food, nice couches and clean bathrooms makes it difficult to justify the time, effort, and money spent going to the actual game. It’s even more pronounced in the NFL, with each team hosting just eight home games per year. 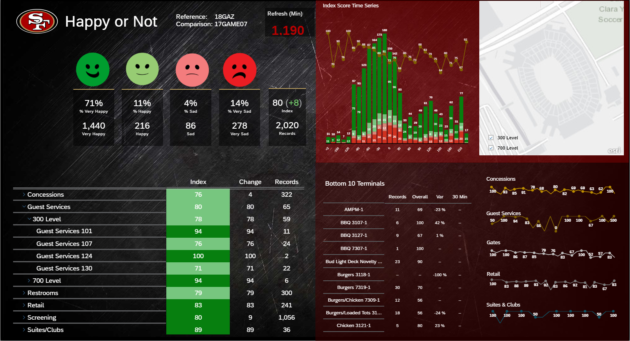 Beyond improving the fan experience and managing stadium operations, this technology also opens up potential revenue opportunities — for example, seeing if fans respond to certain messages or advertisements. There are also opportunities to use more predictive analytics or machine learning to automate some of the Executive Suite processing.

Behind the scenes at high-tech Levi’s Stadium, where the WiFi is never more than 10 feet away

Javaid said he’s often asked what kind of technology gets him excited in the sports world and people expect him to call out something flashy or sexy, such as virtual reality. But he’s more enthralled about a tool like Executive Suite.

“This is technology that’s going to affect 70,000 fans in our building,” Javaid said. “It’s not meant for a subset of people or to create a more premium experience for a select few.”

The goal is for SAP is to have other teams using the software and potentially also outside of the sports world at places such as amusement parks or other places where technology can help manage the guest experience for thousands of customers in real-time. The Executive Suite software is also in use with a handful of European sports clubs.