After browsing online for hours on Sunday, Mike Howell finally found a refrigerator he liked. There was one problem, however. The shipment wouldn’t arrive until the second week of October.

It was another use case for Dolly, the Seattle startup that today announced expansion to San Francisco and Washington D.C. The moving app is marketplace that connects people needing to move big, bulky items with on-demand vetted contractors who have large enough trucks to do the job.

After launching in 2014, Dolly is now operating in nine U.S. cities, with Los Angeles and Orange County going live next month. The company is producing more than $1 million in revenue per month and counts more than 100,000 customers. It expects to be in the top 30 U.S. markets by next summer.

Dolly, backed by investors including Maveron, KGC Capital, and top Amazon exec Jeff Wilke, has followed marketplace companies such as Uber and Airbnb, using technology to match supply and demand for a given service. In Dolly’s case, it’s moving large items — something that traditional movers have done for decades.

“Forever, the traditional providers of these services have been focused on their own efficiency, as opposed to what the outcome is for a consumer,” Howell said. 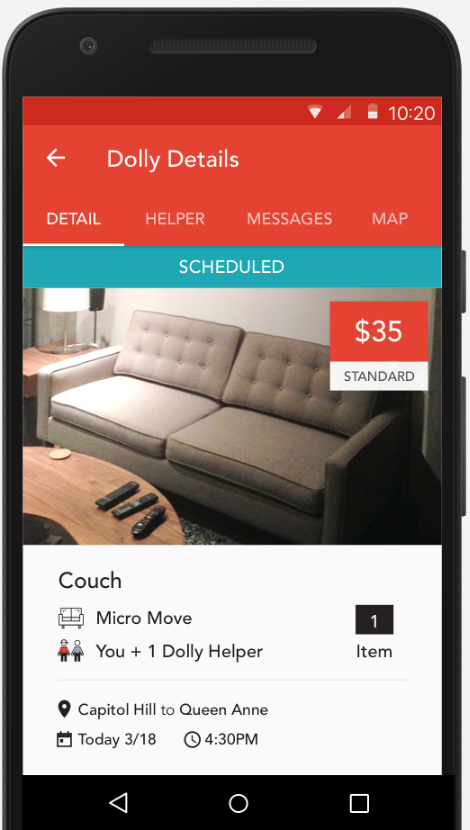 Dolly has more than 5,000 vetted independent contractors on its platform available to accept requests from customers who need something moved. Dolly’s “Helpers” can make $30 or more per hour if they have a truck and can lift more than 75 pounds.

Dolly’s prices vary on the number and type of items being moved, the number of movers needed, the distance between pickup and drop off, and the service level. Howell said prices are “incredibly competitive” with comparable options.

Dolly reaches customers in two ways: direct marketing (transit campaigns are a good way of reaching people who don’t own cars, Howell said) and retail partnerships with stores including Lowe’s, Crate & Barrel, and IKEA, which partner with Dolly for their own customer deliveries. In that vein, it’s similar to Porch, another Seattle startup that built a marketplace for home services.

Howell said the company has a “maniacal focus” on providing exceptional customer service. Dolly has mostly 4-star or higher reviews on Yelp, Google, and app stores, though there are some customers who complain about damages or cancelations. Problems are bound to arise given the nature of the moving business, Howell said, and the company has a focus on “exception handling.”

In June, Dolly sued the Washington Utilities and Transportation Commission, disputing its findings that deemed Dolly as a “household goods carrier,” operating without the proper license and requirements. That case is in a holding pattern, Howell said. Dolly is participating in a task force ordered by the Washington state legislature.

It’s a similar legal dispute that other app-based marketplace companies have faced in recent years. Those companies claim they simply provide the underlying technology to connect people who want to exchange services. For years, lawmakers have been trying to figure out whether these companies should be regulated like traditional service providers.

“This is not about not wanting regulation — we welcome regulation,” Howell said. “It’s just about how to appropriately come up with the right regulation for what we do.”

Dolly has raised $10 million to date. Howell, who co-founded the company with Jason Norris, Kelby Hawn and Chad Wittman, said the startup is looking at additional fundraising options. Dolly is not yet profitable.

“Dolly has one of the highest customer satisfaction scores (NPS) we have ever seen in a young company,” Maveron Partner Jason Stoffer said in a statement. “Dolly will create a giant business, serving consumers and retailers, as a result of being the only moving service for large items that truly puts the customer first.”

Dolly competed with other Seattle moving startups such as Wagon, Ghostruck, and Fleetzen, but those companies don’t appear to be active. Other competitors include Moved, which just raised funding from Lowe’s venture arm, and buddytruk.

Growth in the housing market and within city populations has helped the moving services industry grow to $18 billion, according to IBISWorld.