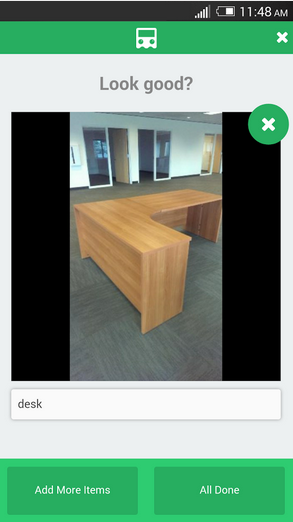 Whether it’s a massive dresser, a giant piano, or your 5-piece leather couch, moving large stuff just isn’t fun. Ghostruck knows that, and now the new Seattle startup that’s essentially an Uber for large deliveries has raised some cash to help you out.

Ghostruck confirmed with GeekWire today that it has raised $1.2 million of a $1.8 million seed round that’s being led by Founders Co-op.

The startup, a recent graduate of Seattle-based incubator 9Mile Labs, acts as a marketplace that matches people needing to deliver large items with licensed, professional movers that have gone through background checks and are insured in case of accident or loss.

“This isn’t like Craigslist Joe or a guy with an F150,” co-founder and CEO Nathanel Nienaber said today.

The idea is fairly simple: Those with something to move post their item to Ghostruck and add information like address, desired pick-up time, and special instructions like extraordinary weight or fragility. The app then finds a mover and notifies you when someone has agreed to do the job.

The cost is calculated on the item itself, the difficulty of the move, and distance.

“What Uber is for taxis is what we are for box trucks,” said Nienaber, who previously worked at Georgia-Pacific.

Nienaber, who founded the company with four others, was mum on other details about Ghostruck, which has been operating in the Seattle area for the past several months.

The startup is similar to another new Seattle service called Wagon, which we wrote about in June. And this idea has certainly crossed Uber’s mind, too, as the big company tested out a moving service in Atlanta and Nashville last month (Uber told us that it has “no other similar promos planned at this time.”)

Ghostruck’s other competition is the hundreds of movers that have been doing business for years. But it’s clear that the startup is trying to differentiate with its app.

“Posting your job to Ghostruck will take approximately 5 minutes,” reads the site’s FAQ. “Think about how long it would take you to research, interview, select, and negotiate with a mover? Don’t even think about asking to borrow your friend’s pickup truck again. Trust us. The friendship can’t handle it.”