Seattle startup Dolly is suing the Washington Utilities and Transportation Commission in a case with potentially far-reaching implications for gig economy companies.

Dolly operates a website and app that connects people who need help moving big objects with truck owners for a fee. State regulators say that qualifies Dolly as a moving company, which requires a special license, insurance, and regular vehicle safety inspection checks. The company disputes the finding, asserting that it simply operates a marketplace much like Uber, TaskRabbit and other popular services.

In March, the commission classified Dolly as a “household goods carrier,” operating without the proper license and requirements. The commission ordered Dolly to cease operating in Washington state, and fined the company $69,000. Although the ruling applied to Washington state operations, the cease-and-desist order was far-reaching — requiring Dolly to remove its app and “its presence from Facebook, Twitter, Pinterest, and any other social media sites or other platforms it uses or has used.”

Update: In April, a judge modified that language and reduced the reach of the order, instructing Dolly to indicate on its website, and in advertising on social media sites, that it does not perform services in Washington state, according to the commission.

Dolly has continued to operate in the state despite the cease-and-desist order, and on June 15, the company filed a lawsuit disputing the commission’s findings in Thurston County Superior Court. In the complaint, Dolly claims that the commission’s order is “arbitrary and capricious,” lacks “substantial evidence,” relies on “erroneous interpretations of law” and fails to follow proper administrative procedure. Dolly is asking the court to reverse the commission’s classification as a household goods carrier and cancel the $69,000 fine.

Amanda Maxwell, a spokesperson for the commission, said Dolly could continue operations legally if it satisfies the obligations required to be a moving company and obtains a license.

“When you’re sending people into homes, into consumers’ homes, to transport their household goods, you’re going to want someone that’s been background checked and has the proper insurance levels if something goes wrong,” she said.

Dolly launched in 2014 with an app that allows people to enter details about what they need moved, then connects them with vetted contractors called “Helpers.” Helpers go through a seven-step onboarding program that includes background checks, insurance verification, and training. The startup has raised close to $10 million. In addition to Seattle, Dolly is currently operating in Portland, San Diego, Denver, Chicago, Philadelphia, and Boston.

The dispute is not a new one for app-based tech companies like Dolly, Uber, Airbnb, and others. Those companies claim they simply provide the underlying technology to connect people who want to exchange services. Regulators aren’t so sure. For years, they have been trying to figure out whether these companies should be regulated like traditional service providers.

“This is what disruption looks and feels like,” Dolly CEO Mike Howell said via email in response to GeekWire’s inquiry. “Regulations for this industry haven’t kept pace with the latest technology consumer expectations, and incumbents are using these regulations to resist change.”

The Washington state Legislature has asked the Utilities and Transportation Commission to review “micro-mover” companies, like Dolly, and come up with recommendations for how to regulate them by the end of the year. The Legislature also asked the commission to create a task force to explore these issues, which Dolly says will include one of its representatives.

Last June, the commission fined Dolly competitor Ghostruck for operating as a household goods carrier without a license and ordered the company to cease and desist operations until it obtained the proper permits. Ghostruck ultimately ceased operations as a result of the ruling, saying in a message on its website that it “could not find a way to comply with traditional mover regulations once were considered a traditional mover.” 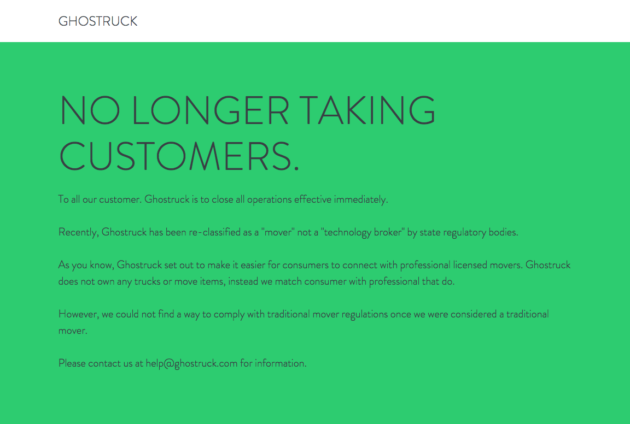 “The commission is exploring some opportunities for better safety and consumer protections,” commission spokeswoman Maxwell said. “We’re working with stakeholders right now and I think that towards the end of the year we’ll have a better picture of what best way to proceed.”

Continue reading for Dolly’s complaint against the Washington Utilities and Transportation Commission.

DOLLY vs. WASHINGTON STATE UTILITIES AND TRANSPORTATION COMMISSION by GeekWire on Scribd