After co-founding Avvo and helping grow the online legal directory for the past 13 years, Mark Britton is ready for his next adventure.

The Avvo CEO and four of his fellow executives will depart the Seattle-based company over the next few months. Avvo, founded in 2006, entered into an agreement to be acquired by Internet Brands this past January, and the transaction is now complete. 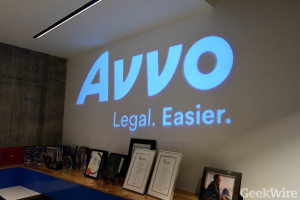 In a letter to employees, Britton explained the reason for his departure. He planned to stay with Internet Brands after the acquisition, helping the holding company — whose portfolio includes eDoctors, CarsDirect Connect, and WebMD — “rollup all of their great legal assets and maybe even get them public.”

“But as I was able to spend more time with the IB team post-signing, it became clear to both [IB CEO Bob Brisco] and me that it was going to be hard for IB to keep my tick-tock at bay,” Britton wrote.

Britton noted that Avvo has a “deep, ambitious bench — and that bench will have greater opportunities to pursue interesting and expanded roles with me out of the way.”

Britton told GeekWire that he doesn’t have immediate plans for his next gig and wants to spend time with family.

After raising $71.5 million in venture funding three years ago, Avvo appeared to be on a fast track for an initial public offering. At the time of that funding, Bloomberg News pegged the company’s valuation at about $650 million. But Avvo was ultimately acquired by Internet Brands — owned by private equity firm KKR — with Britton telling GeekWire in January that the deal made “perfect sense.”

Britton, who co-founded Avvo with Paul Bloom and Sendi Widjaja in 2006, is a former Expedia general counsel. Here’s his letter in full:

Many of you have been asking about what’s happening with Avvo now that the transaction is closed – and the answer is quite a lot. While we will share more in town hall meetings tomorrow, I’m writing to let you know that a number of your SLT members will be stepping down over the next couple of months — yours truly, Monica Williams, Josh King, Sachin Bhatia and Kevin Goldsmith. While this may come as a surprise to some, the five of us have been working through this the past month, and our departures increasingly made sense as we planned for the future with Internet Brands (IB). I’ll let the others share their own thoughts at their own time – because all of our situations, while similar, are also different.

My situation is pretty simple: It’s time for me to go, and let me explain why.

In the spring of 2005, I sat late-night at a kitchen table in Sardinia (which sounds somewhere between comical and exotic) sketching out my rough ideas for a consumer-centric legal marketplace that ultimately became the Avvo we know and love today. Unbelievably, that was almost 13 years ago; and I’m not sure I appreciated the long, wild ride I was uncorking that night. It has been a rollercoaster of epic proportions; but I sincerely would not change a thing . . . except maybe the passage of time. My reality is that I’m now 51, and I have only so many “top of my game” working years left. I’ve developed a Captain-Hook-quality tick-tock in my head forcing me to be very selective regarding the last decade of my professional life (ok, maybe a decade and a half).

As I shared with most of you in announcing this deal, my original intention was to spend something measured in years with IB to help them roll-up all of their great legal assets and maybe even get them public. That seemed to be good for IB, Avvo and me. But as I was able to spend more time with the IB team post-signing, it became clear to both IB’s CEO (Bob) and me that it was going to be hard for IB to keep my tick-tock at bay. The specifics here aren’t important or even that interesting, but this all led to me flying down to LA recently, and the two of us putting together a transition plan.

One of the reasons that Bob and I felt a faster exit may be better is that Avvo currently has such a deep, ambitious bench – and that bench will have greater opportunities to pursue interesting and expanded roles with me out of the way. A new leadership group will materialize over the coming weeks, and I’m confident it will have all the necessary skills to contribute to and realize the IB/Avvo opportunity.

So here’s the quick math:

Even though it is time to go, I (along with Monica, Josh, Sachin and Kevin) are committed to a smooth and thoughtful transition. Our plan is to transition as much as possible over the next couple of months; but we realize there will be ongoing things that need our input. A good example is Lawyernomics: Josh and I will continue to help the team to plan and put on a great conference in Vegas. We are also committed helping the IB/Avvo integration move quickly, and the first step in that regard is our town hall meetings tomorrow. Calendar invites have already gone out; however, a friendly reminder that we are gathering with the Sales team from 2:00-3:00pm and the rest of the company from 3:30-4:30pm. Obviously, we have a lot to talk about regarding the future, but Monica, Josh, Sachin, Kevin and I are also happy to answer any questions regarding our respective transitions.

We will see you tomorrow!