At many offices around the country, employees engage in March Madness basketball pools, or annual Oscar picks.

At GeekWire, we are focused on something else: Where will Amazon place its second headquarters, a massive $5 billion undertaking that could employ up to 50,000 employees. The guessing game has been going on for a year, and everywhere we turn people ask us: Where’s HQ2 going?

Now, with the buzz building and the end of the year deadline approaching, we polled the GeekWire team to see what they think. In the ultimate reality show — and economic sweepstakes — 20 cities are in the running, but there will truly only be one survivor!

Who will it be? The front runner, at least amongst our team, with four picks is northern Virginia, followed closely by Washington D.C, with three picks.

Austin, Boston, Atlanta and Newark each got a vote.

One contrarian view — after all of this endless hype: Amazon decides not to do HQ2. (This was laid out as a possibility in the original call for proposals). Instead, the Seattle tech giant spreads employment across two, three or more of the locations. In other words, we could see HQ3 and HQ4 announced, as well. (Knowing Bezos, he’s likely dreaming of HQ5 in outer space!)

The company is already doing this in many ways, and in recent months has announced additional expansions in places like Boston, Vancouver and Pittsburgh. That would leave a lot of cities wanting, and could be a bitter pill for some to swallow. But, if there’s anything we’ve learned in covering Amazon and Bezos over the years here in Seattle: They are unpredictable and willing to be misunderstood.

Let us know in the comments where you think HQ2 is going and the date the announcement will be made, and join our unofficial office pool!

—Alan Boyle, Aerospace & Science Editor, predicts announcement on Nov. 19: “The Monday before Thanksgiving, so that the news and the hype can dominate what’s traditionally a slow week leading up to the official start of the holiday retail season. All the attention for Amazon will overwhelm anything else retailers dish out for Black Friday. I’ll do the easy, popular thing and predict HQ2 will be in Northern Virginia, close to D.C. and Reagan National Airport.”

—Todd Bishop, co-founder of GeekWire, predicts Monday, Dec. 3: “Amazon will officially announce HQ2 with a splashy press conference in Washington, D.C., on Monday morning, Dec. 3, after unveiling the plan in a special 60 Minutes interview with Jeff Bezos the night before. Sure, it’s an old-school media strategy from a company that owns Twitch, but it’s reminiscent of the way Amazon originally unveiled its drone delivery ambitions. Having personally heard Bezos tout the benefits of an urban campus, I believe that HQ2 will be in a major city, not a suburb; and having visited each of D.C.’s proposed HQ2 sites earlier this year, I can vouch for the potential of our nation’s capital to host this one-of-a-kind economic prize. That said, I still wish it could be Pittsburgh.”

—Frank Catalano, Contributing Writer & Editor, predicts early morning of Thursday, Nov. 8: “It’s safely after the noise of Election Day, but before the start of Thanksgiving week and likely Amazon’s inevitable countdown to Black Friday. Fridays are out; they’re used to bury bad news. And the following Monday is a holiday, Veterans Day, which would be an edgy but dangerous choice for Amazon to maximize attention. I’m picking Northern Virginia by a nose because airport access from Dulles is easier, and it has good transit due to lots of federal workers.”

Fridays are out; they’re used to bury bad news.

—John Cook, Co-founder of GeekWire, predicts Monday, Nov. 12: “I’ve flipped-flopped for months between Toronto — a vibrant tech hub with an entire country behind the bid — and Northern Virginia. I just think the border crossing is too complex, and the political risk too high for Amazon to land in Canada. So, I am going back to my analysis on January 18th, where I picked Northern Virginia as the future home of HQ2, and to get more specific — following a recent NYT analysis — Crystal City, VA. Yes, Nov. 12th is Veteran’s Day, but Amazon has been out front and extremely forward-thinking in the hiring of veterans, and I could see them leveraging this often forgotten holiday with a big philanthropic effort that ties into the high-profile HQ2 news announcement. Heck, we wouldn’t put it past Bezos and team to somehow arrange the announcement to be made with the backdrop of the Iwo Jima Memorial in nearby Arlington, Va. factoring in, and an even bigger commitment to hiring veterans. This chart, from a story we did in last month, also points to northern Virginia. 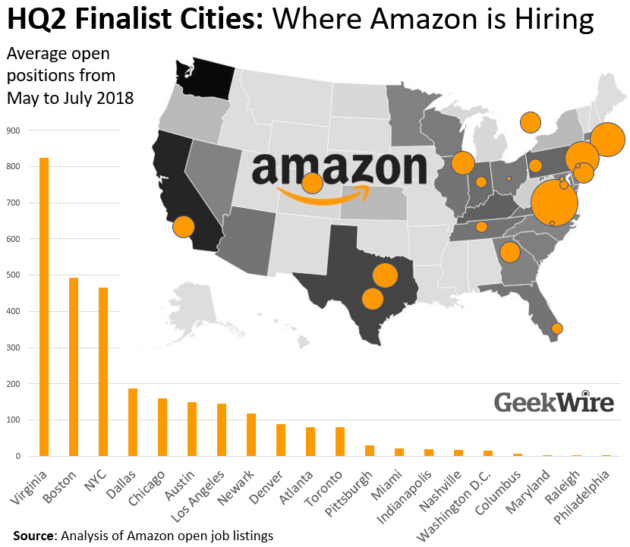 —Tom Krazit, Cloud & Enterprise Editor, predicts Wednesday, Nov. 28: “Viva Las Vegas! Amazon Web Services CEO Andy Jassy will take the stage at re:Invent 2018 on Wednesday, November 28th, where he will be joined by special guest Jeff Bezos to announce that Amazon’s HQ2 will set up shop in downtown Las Vegas…[checks notes] I’m being told Las Vegas is not one of the 20 cities being considered for HQ2! In that case, I’ll pick Newark, just a few miles up the road from the East Coast gambling mecca of Atlantic City.”

—Cara Kuhlman, Operations, Events & Marketing Director, predicts Thursday, Dec. 6: “I predict Amazon will announce Amazon HQ2 in Northern Virginia during the afternoon of Thursday, December 6 — just hours before the GeekWire Gala. Why? Because there has been breaking news during almost every one of GeekWire’s events this year. There’s nothing quite like some extra adrenaline to propel the GeekWire team through a wild news cycle, celebrating the season with Seattle’s tech community and then end the evening tearing it up on the dance floor.”

—Nat Levy, Staff Reporter, predicts Friday, Dec. 7: Arguably Amazon’s biggest non-HQ2 announcement — the acquisition of Whole Foods Market — came on a Friday. Amazon is going to have everyone talking again over a weekend. But which one? Between the election, Thanksgiving and Black Friday, that doesn’t leave a lot of time in November. I’m throwing my dart at Friday, Dec. 7, giving some breathing room before the holidays. Like the World Series title, Amazon is headed to Bean Town, a city where the company is already expanding rapidly. Where else to solve the greatest problem of our time in healthcare and take advantage of a huge tech workforce?”

—Monica Nickelsburg, Civic Innovation Editor, predicts Tuesday, Nov. 13: “I’d say Monday if it weren’t Veteran’s Day. This date gives enough breathing room after the election and before Black Friday, plus affords Amazon almost a full week for events and news coverage tied the the announcement. My guess is Washington, D.C. proper. The region affords Amazon a lot of advantages, including proximity to the federal government, East Coast talent, and Bezos’ newspaper, The Washington Post. Northern Virginia is getting a lot of attention as the favorite but Bezos’ past comments about not wanting to locate Amazon in a suburb makes D.C. proper look like the most likely candidate to me.”

—Kurt Schlosser, Geek Life Reporter, predicts Monday, Dec. 10: “Much like Election Day, you can’t believe the polls anymore. Everyone thinks Amazon will make its big announcement in November, before Black Friday, but I have a hard time seeing the tech giant cramming its news in around the huge midterm election news cycle and subsequent President Trump noise and one of its busiest shopping days of the year. So, hello Monday, Dec. 10. Amazon loves gift giving, and in December it will gift itself with non-stop coverage of the fact that it’s putting HQ2 in Austin — home to Whole Foods, The University of Texas and in the heart of one big tech talent pool. My heart wants to say Pittsburgh, where GeekWire HQ2 made its mark in February, but don’t think it will end up in Steel City. Really, anywhere but the D.C. area.”

—Taylor Soper, Staff Reporter, predicts Monday, Nov. 12: “The Washington D.C. area makes sense for Amazon and Jeff Bezos. But in a surprise decision, Atlanta will win the HQ2 sweepstakes. It has available and affordable housing; a bustling business environment with fellow Fortune 500 companies; strong universities such as Georgia Tech and Emory; and is a supply chain hub. Amazon will follow Convoy, a Seattle startup backed by Bezos that just announced its new office in Atlanta.”

—Lisa Stiffler, Reporter, predicts Sunday, Nov. 25: “HQ2 is going to be somewhere in Washington, D.C. They’ve got to get closer to the political action. I’m a little hazy on the date, but let’s look to the past for hints. Bezos promised to announce his big plans for philanthropic giving by the end of summer, and he shared his news on Sept. 13. Technically still summer, but pretty darn close to fall. And more importantly, it was one week before Amazon announced a bunch of crazy Alexa products (who’s signed up for an Echo empowered toaster?!) on Sept. 20. I think he’ll definitely want to drop this much anticipated HQ2 decision, creating happy Amazon buzz ahead of other news that they want to give a positive boost to. So, I am going to say Sunday, Nov. 25th — the day before AWS re:Invent.”