Twitter is happy with how the company’s NFL live streaming product performed this season, but it remains to be seen if the league will continue airing games on the social media platform.

Millions of football fans around the world had a new, free option for streaming NFL games this season thanks to Twitter after the company paid the NFL a reported $10 million to stream 10 Thursday Night Football games this season. Last month’s battle between the Giants and Eagles marked the final game of this season streamed on Twitter.

The partnership started off with the Jets vs. Bills game in September without many latency issues and to generally positive reception. Twitter reported just more than 2 million viewers for the initial game, and that increased to 2.2 million the following week.

Average viewership for the eight remaining games ranged from 2.6 million to 3.1 million, which Twitter reached for the Week 14 game between Oakland and Kansas City.

For context, NBC said there were 17.4 million TV-only viewers for the Oakland vs. Kansas City game.

Throughout the season, Twitter also reported the average minute audience (AMA), which hovered around 250,000 per game, a small percentage of fans who watched on NBC, CBS or the NFL Network.

In an interview with GeekWire, Twitter’s global head of sports partnerships Laura Froelich said that the live streaming deal with the NFL went “incredibly well,” noting increases in viewership each week and positive comments from fans.

“Our hypothesis was that we had the ability to instantly explain the value and power of Twitter by having both the game, and the conversation around the game, all in one place,” she said. “It’s really, really resonating with fans.”

Users around the world (except Canada) could stream the games for free — on browsers; on Twitter’s mobile app within the Moments tab; on the company’s new apps for Apple TV, Amazon Fire TV, and Xbox One — even if they didn’t have a Twitter account or any sort of cable package. This was key for Twitter, which is struggling to add users in comparison to its competitors and wants to attract as many people to the stream as possible.

Like Twitter’s streaming coverage of Wimbledon, the live video played on one part of the screen, while a stream of curated tweets cascaded down the other. Twitter aired the same play-by-play commentary shown to those watching the CBS feed on TV. It also showed advertisements throughout the game, just like a normal TV broadcast. 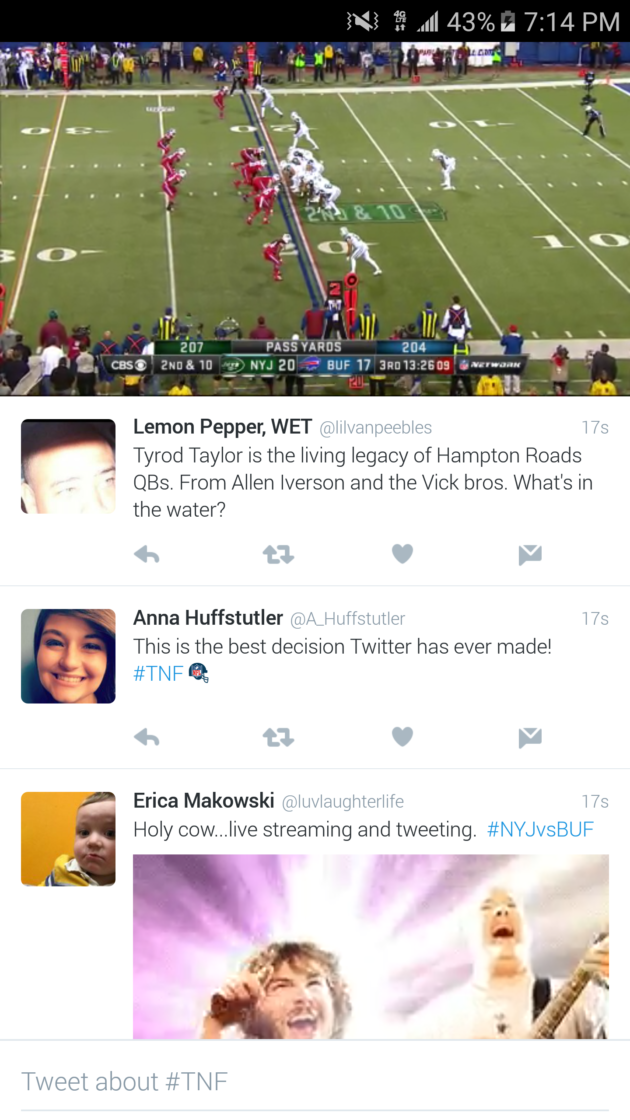 Some advertisers were reportedly underwhelmed by the audience numbers from Twitter’s stream. But Froelich said companies like Verizon and Anheuser-Busch, which paid Twitter a reported $2-to-$8 million for NFL streaming packages, are happy and “extremely excited to be in on the innovation and how we are redefining how fans consume live sports.”

“It’s really been a success all around and we are excited to build on that,” she added.

Asked about what is in store for next year, Froelich said Twitter is focused on wrapping up this season, which includes its Amplify advertising program, a revenue-share deal for advertisers that the NFL has been apart of for the past four years and uses to publish more than 100 video highlights on Twitter per week.

“One of the aspects of our partnership with the NFL is not only around live content, but Amplify as well,” she explained. “Our value proposition to marketers is not only just the live integration into our live broadcast, but also the opportunity to have a conversation with consumers day-in and day-out through the Amplify program.”

When asked if the NFL will partner with Twitter again next season for a live streaming deal, an NFL spokesperson told GeekWire that the league is still evaluating its options.

Twitter beat out other suitors like Facebook and Amazon for the rights to stream the 10 Thursday NIght Football games this season. Inking another deal for next season would make sense for the company, given its new focus on buying rights to live content and streaming the action on its platform.

Twitter has partnerships with more than 300 rights holders and has signed similar live streaming deals with leagues like the NBA and MLB, which will stream one game per week on Twitter in 2017. It also is looking at non sports-related content; Twitter has deals with media giants like Bloomberg and CBS, and this week the company announced that it will stream the Golden Globes’ red carpet pre-show.

Now we have not only the content, but the conversation around that content, all in one place.

“Now we have not only the content, but the conversation around that content, all in one place,” Froelich noted.

That strategy was echoed by Twitter CFO Anthony Noto, who was previously CFO of the NFL, in April when he said that combining tweets with live video is a “complete solution.”

“We know that during a 3-hour Thursday Night Football telecast, we have millions of users looking at tweets about that game and creating tens of millions of impressions that we know are very valuable to them, and very valuable to our partners — both the NFL, and of course our advertisers,” he explained on a company earnings call. “Being able to bring the live streaming game into the product with those live conversations and commentary is a complete solution.”

But paying for the rights to content like live NFL games is expensive. And as Recode explains here, ad revenue from the NFL games aren’t a “needle-mover” for Twitter.

Twitter’s user growth has essentially stalled for the past year; it only saw a 3 percent increase in monthly active users in its most recent earnings report. As the company’s stock has fallen 30 percent in the past year, Twitter has reportedly explored a sale, but many of its potential suitors, like Salesforce, Disney, Google and Apple, among others, have publicly stated they aren’t interested.

Twitter said in October that it would lay off 9 percent of its workforce, or approximately 350 people, primarily as a reorganization of the company’s sales, partnership and marketing efforts. Several executives, including its COO and CTO, left the company this year.