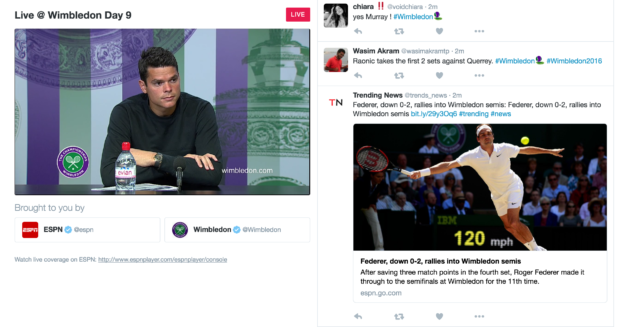 Tennis fans may not get a lot of work done today.

Twitter has begun its foray into live sports coverage today with a stream of tennis’ biggest tournament, Wimbledon.

The stream is pegged to the left side of the page and can be enlarged to full screen. There is a live feed of tweets related to the event on the right. A “brought to you by” category below the stream includes the official Twitter handles of Wimbledon and ESPN, as well as a link to watch matches online through ESPN.

I’ve been watching the stream on my laptop this morning, and so far it has included match coverage and highlights, analysis and interviews. There haven’t been any commercial breaks. There’s also been a little bit of celebrity spotting.

Trying to keep my cool here but sat 5 seats away from my hero @Wimbledon #DavidBeckham pic.twitter.com/4QaZTKdTC7

It’s been an exciting day at the All England Club as seven-time Wimbledon champion Roger Federer came back to beat Marin Cilic after dropping the first two sets. Some users complained that the Twitter stream chose to air another match instead of Federer’s.

Twitter is making a big push for live video with a focus on sports. This fall the NFL plans to stream 10 regular season games, in-game highlights, and pre-game Periscope broadcasts on the social platform. The Twitter partnership is part of the NFL’s “tri-cast” plan to distribute games via broadcast, cable, and digital.

Twitter’s live experience will likely look a lot different in the future.

“Twitter is increasingly a place where people can find live streaming video, and that includes exciting sporting events like Wimbledon,” Twitter said in a statement shared with numerous media outlets. “This livestream is an extremely early and incomplete test experience, and we’ll be making lots of improvements before we launch it in its final form.”