The Seattle region and the state of Washington just got another big boost to elevate its reputation as a global technology hub.

The Global Innovation Exchange, a new U.S.-China graduate tech institute, opened its doors on Thursday at a launch event that welcomed well-known dignitaries, politicians, venture capitalists, business executives, and other leaders from the area who gathered at the new 3-story, 100,000-square foot GIX building in Bellevue, Wash. 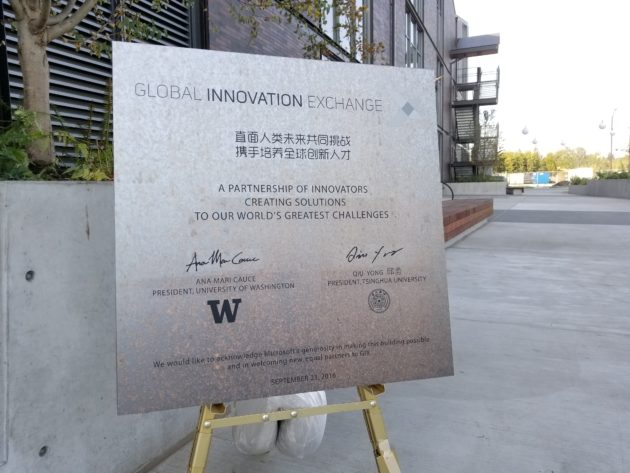 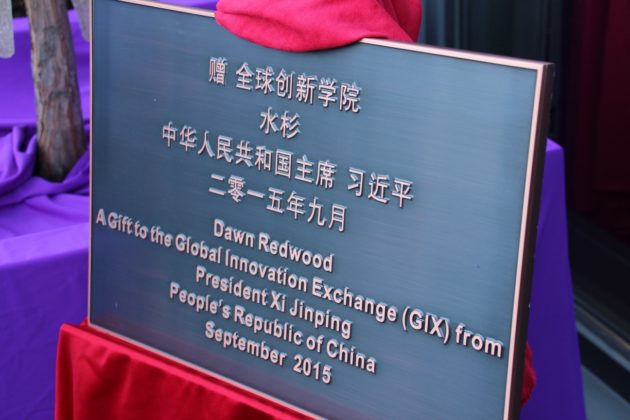 The celebration marked a culmination of nearly five years since the idea for GIX first came about, ultimately bringing together two leading academic institutions — the University of Washington in Seattle and Tsinghua University in Beijing — and a founding corporate partner in Microsoft (which put $40 million toward the program) to help create a first-of-its-kind graduate school designed to train students in entrepreneurship and encourage new ideas around real-world challenges.

GIX, first announced in 2015, represents the first time a Chinese research institution has established a U.S. location. The high-powered folks at the event on Thursday was symbolic of how much support GIX has from various education, government, and business organizations. They noted how quickly GIX was able to go from a kernel of an idea to an actual institution, particularly with so many different partners involved and how universities traditionally move slowly on new projects like GIX, which also received a $10 million contribution from the Bill & Melinda Gates Foundation.

RELATED: What you need to know about GIX, the new UW-China tech school the promotes entrepreneurship

University of Washington President Ana Mari Cauce, who has been closely involved in the development of GIX, helped open the doors to the new building with Microsoft President Brad Smith and Tsinghua President Qiu Yong.

“We opened doors to the future, doors of opportunity for our students,” Cauce said on stage at the event. “This is going to be a big, big deal.”

GIX will welcome its first 44-student cohort later this month at the new “Steve Ballmer Building,” named after the former Microsoft CEO who helped the Redmond, Wash.-based tech giant expand its business around the world during his 14 years at the helm.

“It was not a difficult decision,” Smith said of naming the building after Ballmer. “In the 42-year history of Microsoft, no one has done more than one person to take Microsoft to the world, to build our subsidiaries and connect us with people and customers around the world.” 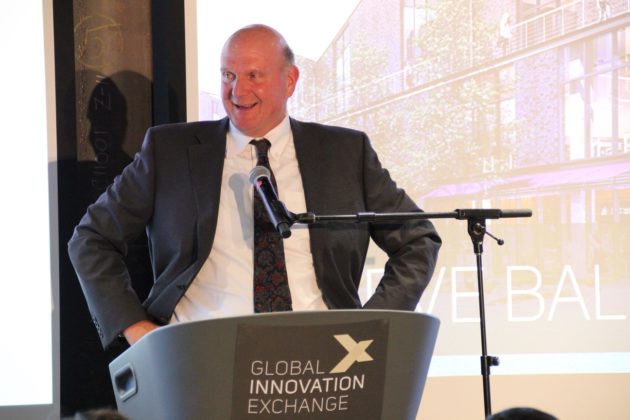 Microsoft CEO Satya Nadella and Microsoft CFO Amy Hood were also at the event to honor Ballmer. Nadella, who succeeded Ballmer three years ago, also praised the UW and Tsinghua for helping promote a “new way of learning.”

It was clearly an emotional moment for Ballmer, who spoke briefly on stage with his classic high-energy that had the crowd instantly chuckling and cheering. He admitted that when he first heard about the idea for GIX, he thought it was “impossible” and had no idea who would make it work. But he saluted the leadership from Microsoft and both founding universities, calling GIX “brilliant.”

“This is quite an honor for me,” Ballmer said at the end of his remarks, his voice trailing off and eyes tearing up a bit. The building itself, nestled in Bellevue’s new 36-acre Spring District development, features classrooms, an incubator, and makerspace with state-of-the-art equipment. Much of the GIX curriculum is designed around team-based projects to help prepare students for real-world work, and the layout of the building reflects that. 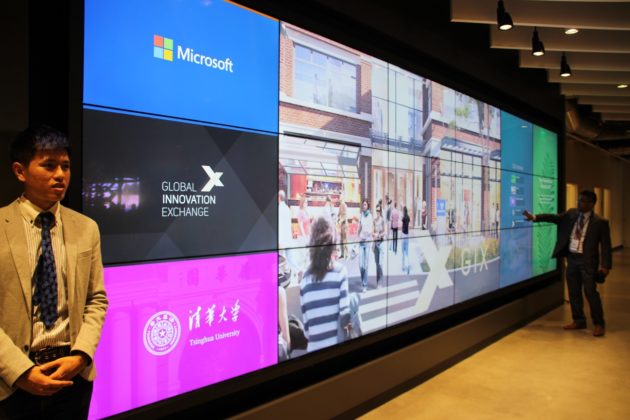 Students, who start classes in two weeks, will have an opportunity to study in both Bellevue and at Tsinghua while earning graduate degrees that range from $54,000 for a 15-month program to $77,000 for a dual-degree 21-month program. Faculty includes top professors from both UW and Tsinghua; those helping lead GIX include highly-regarded innovators like Shwetak Patel. 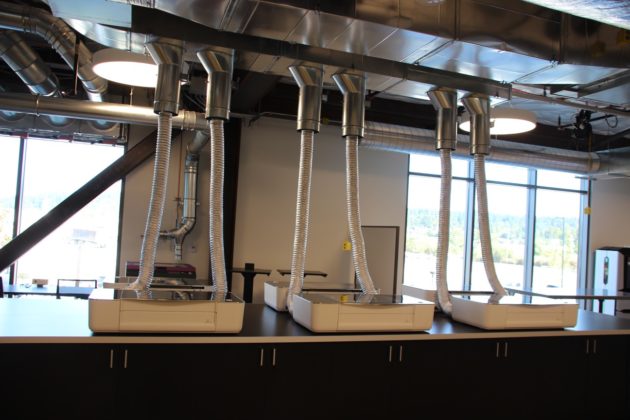 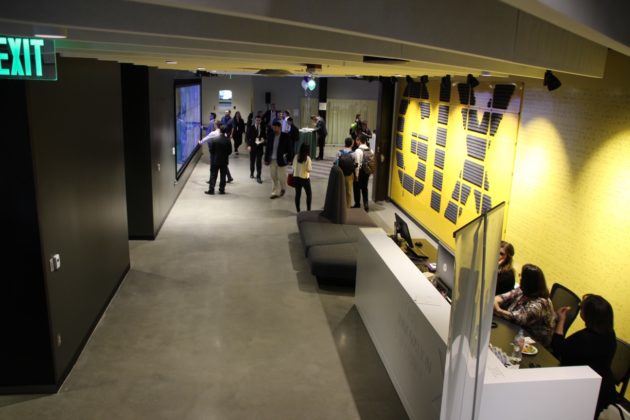 Washington Gov. Jay Inslee also spoke at the event. He said having GIX open in the state fits the mold for what his constituents are all about.

“In Washington, innovation is absolutely the spine and heart of who we are and what we do,” he said. “It’s in our DNA. We invent; we create; we build.”

“This is the most connected institution in the world today, literally with what we’ve done from multiple continents, from businesses, from universities, and from the state of Washington,” Inslee said of GIX. “We have demonstrated yet again in Washington how we can help lead innovation and it is such a thrill to have partners in Tsinghua in this regard.”

Smith, Microsoft’s president, noted that “innovation never happens in a vacuum — it takes an entire ecosystem.”

“Literally we are bringing the world together,” Smith said of GIX. 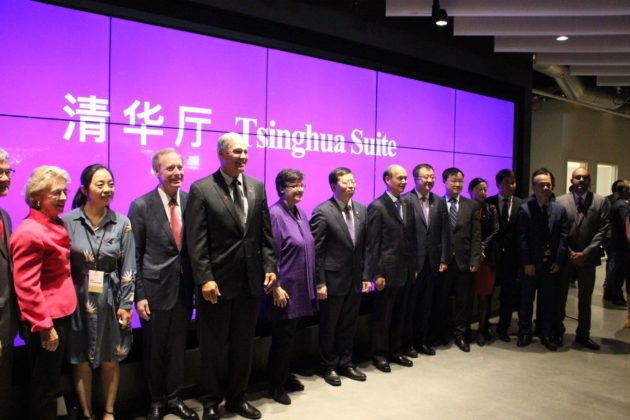 Former Washington Gov. Christine Gregoire has also been heavily involved with GIX and was there on Thursday to be apart of the grand opening. She told GeekWire that “this is frankly what the world needs.”

“This is the kind of education that students need,” Gregoire added. “We teach in silos and we ask students to then go out and practice in teams and multi-disciplines and they aren’t prepared for it. This is exactly what the business world is about.”

She noted that there’s nothing like GIX anywhere in the world.

Madrona Venture Group co-founder Tom Alberg was at the event and also noted the importance of GIX to the Seattle tech ecosystem.

RELATED: From Beijing to Seattle: How the U.S. and China are teaming up at the new GIX tech innovation institute

The students and faculty expressed just as much excitement. Amit Anand is one of the 44 students in the first GIX class and called it a dream come true.

“This gives me an opportunity to learn business and technology at the same time, and implement it in the real world,” Anand said.

Carrie Grey, a user experience designer from Seattle who is also apart of the first GIX class, said it’s eye-opening to be with fellow students that hail from countries like China, Paraguay, Estonia, France, and others.

“That’s the point,” she noted. “We get to learn how other people think, and different perspectives, different cultures, different environments. This brings it all together.”

These institutions will promote GIX to their own students and faculty while offering up potential projects for GIX students themselves. 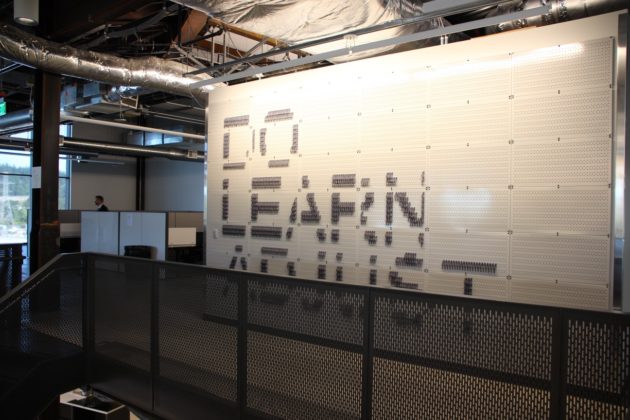 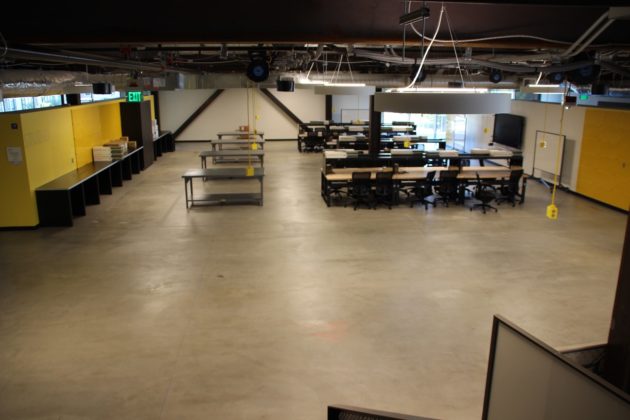 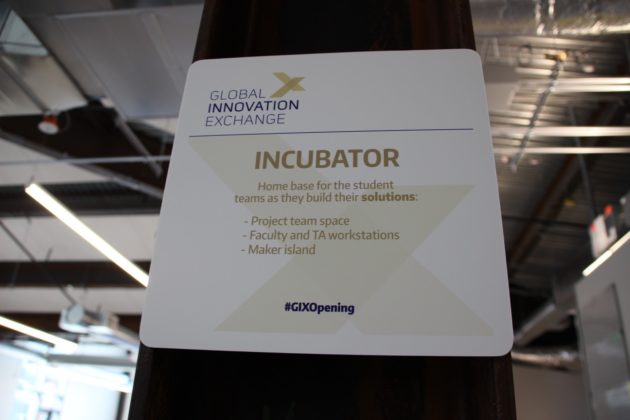 Thursday’s event was certainly a celebration of how much work went into creating and developing GIX itself, which included many flights back and forth from Seattle to Beijing. But Yuanchun Shi, a Tsinghua computer science professor and GIX leader who GeekWire interviewed in Beijing two years ago, put it best.

“It’s just the beginning,” she said. “It’s a good beginning to lead us to a more successful future.”