Yuanchun Shi and Qing-Shan Jia have spent a majority of their lives at Tsinghua University, earning their undergraduate, graduate, and PhD degrees at the prestigious school in Beijing before becoming top researchers and professors on campus. They’ve published hundreds of research papers, helped equip countless students with a top-tier education, and traveled around the world to learn from the top thinkers in their field.

But their newest project is unlike anything they’ve done before — a U.S.-China joint technology institute that launched this month in partnership with Seattle’s University of Washington and Microsoft. They are teaming up with colleagues at Tsinghua, as well as the UW, for an ambitious and unique international partnership where students from around the world will learn about technology and entrepreneurship.

If all goes to plan, the education platform will help tomorrow’s entrepreneurs learn the most effective ways to innovate and create companies that make a real impact on the world.

The Global Innovation Exchange, or GIX, was first announced in June 2015 and launched this month, as nine students in the program started their studies at Tsinghua University.

Leaders from Tsinghua, the UW, and other local organizations will host an event on Friday in Bellevue, Wash. to celebrate the progress of GIX, including the start of construction on the GIX building in Bellevue’s Spring District. That building will open next year and host 70 students, including the nine that are now studying at Tsinghua. It represents the first time a Chinese research university will establish a physical presence in the U.S.

Students at GIX will be taught by teachers from both the UW and Tsinghua, spend time at each campus, and after 15 months will end up with a master’s degree from each institution. The classes aim to break the mold for traditional technology education and train students in entrepreneurship, innovation, and user interfaces for connected devices.

Microsoft is a key corporate partner and committed $40 million to the initiative last year.

GeekWire visited Tsinghua University in Beijing last year as part of our China trip. We had a chance to meet Dr. Shi and Dr. Jia to learn more about the program’s philosophy and vision. We also got to explore the Tsinghua campus. 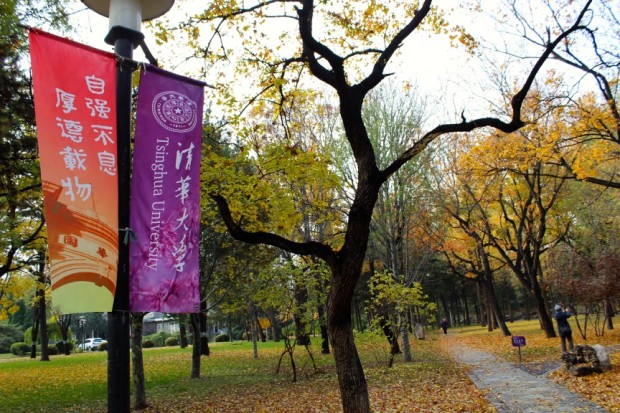 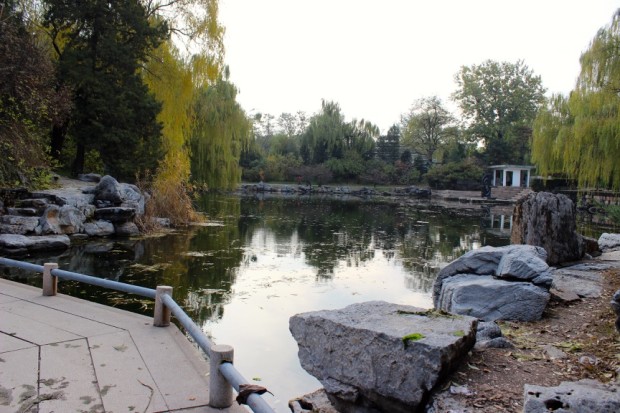 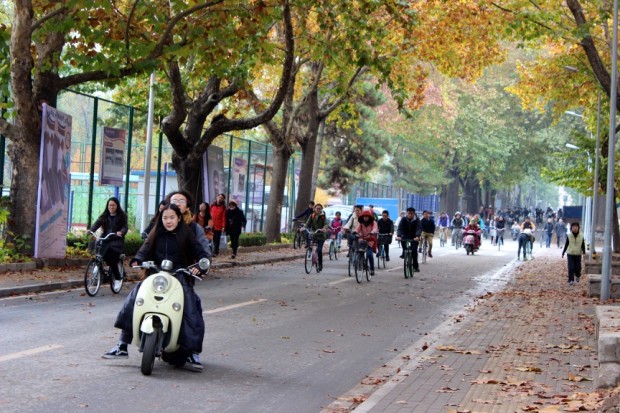 Tsinghua, known around the globe for its top science and engineering departments, is no stranger to participating in international programs like GIX. It has similar partnerships with schools like Johns Hopkins, the University of Southern California, the University of California at Berkeley, and more.

But GIX is in its own league.

“We are trying to do something different,” said Jia, sitting in his office at Tsinghua. “We want to try and reshape the capability of graduate students who want to change the future and change the world.”

Professor Shi said she and her GIX colleagues have been adamant about not simply following the existing framework established for other international partnerships. “It’s a platform, not just a program,” said Shi, who is leading GIX-related efforts for Tsinghua. “It will impact many important things like education, research, and innovation, for both the universities and industry partners.”

Accepted students will have varying backgrounds — computer science, design, arts, etc. — so that they can learn from one another and be better prepared to run their own companies. Professors will follow a project-based curriculum co-developed by each university, using the best learnings and strategies from each school. Microsoft will also be involved, providing industry-level influence and input.

GIX will not follow the typical linear, 10-week lecture model. Instead, it will be much more interactive.

“Students will work together day and night for two years,” Jia said. “In that time, I believe their mindset and capabilities will be reshaped.”

Here’s a description from GIX on what subjects will be emphasized:

GIX is also unique given that the U.S. and China are home to the world’s most robust technology industries, and that Seattle and Beijing are technology hubs. The universities, along with Microsoft — which has a large research footprint in China — can exchange ideas for which startup ideas and strategies work best in each respective country. This is important, as history has shown how it can be difficult for U.S. tech companies to find long-term success in China.

Beyond the curriculum, students will also have access to top innovators, investors, and entrepreneurs in a variety of fields. They will be able to heed advice from mentors and craft their ideas from prototypes to viable businesses.

“Besides a new education system, we are also trying to develop an innovation ecosystem,” Shi said. “The students will not only have better training, but a very good environment for innovation.”

Teaching entrepreneurship can be difficult; there seems to be no replacement for actually starting a company and having that first-hand experience. But GIX aims to prepare students with many of those lessons. It’s a new model for education, and an idea that would likely gain the approval of Alibaba co-founder and chairman Jack Ma.

Before meeting with the Tsinghua professors, GeekWire had a chance to hear from Ma at Alibaba’s headquarters last year as part of an event that included the University of Washington. Ma, who helped start one of China’s most successful technology companies, encouraged universities to improve how they prepare the next generation of entrepreneurs. He said the traditional model for teaching MBA students is outdated.

“I’ve always been curious about this,” he said. “MBA’s were great in the last century, in the IT time. But now, it’s innovation time.”

Ma, who did not graduate from a top tier school and was an English teacher before starting one of the world’s most powerful tech companies — he also first learned about the internet in 1994 during a visit to Seattle — noted that many universities in China want to educate more people who fit the pattern of Facebook founder Mark Zuckerberg or Ma himself.

Perhaps GIX can fill that role and create a platform that other universities around the world can follow.

“It will be tough,” Ma said last year. “But there is definitely a way to discover these people.”

Much like Tsinghua, the University of Washington is also known for its groundbreaking research and innovation. It was named the No. 4 most-innovative university in the world by Reuters last year and continues to invest in its startup incubator, CoMotion.

Tsinghua and the UW actually worked together on separate projects a few years ago. Both Shi and Jia lauded not only the university, but also the state of Washington, which has held close ties with China over several decades.

“It’s not just a random pick,” Jia said. “Both parties regard the other as a very good partner.”

Vikram Jandhyala, UW vice president for innovation strategy who is deeply involved with GIX, has made multiple trips to China over the past year as the program prepared to launch.

“I’ve been surprised by how important the relationships and face-to-face interactions have been, more so than the transactions,” he told GeekWire. “And my frequent travel there is a sign of this. Even though it takes effort, it’s been a pleasant surprise because we are forging a strong bond with our partners at Tsinghua University.”

Jandhyala said the goal and mission of GIX remains the same as when the idea was first conceived: develop thought leaders in innovation to solve the world’s greatest challenges.

But it has also evolved to expand beyond just technology. “It is about the three areas we want to focus our efforts on: health, sustainability and social innovation,” Jandhyala said.

GIX has the support from both academic, industry, and government organizations. Over the next decade, enrollment could grow to as many as 3,000 students with the addition of more degrees and programs, in collaboration with tech companies and non-profits. The vision is to ultimately expand beyond just the U.S. and China, and include more top universities from around the world.