Seattle’s University of Washington and China’s Tsinghua University are partnering to create a new technology graduate school in Bellevue, Wash., backed initially by $40 million from Microsoft.

The school, dubbed the Global Innovation Exchange (GIX), will mark the first time that a Chinese research institution has established a physical location in the U.S.

GIX is slated to open in the fall of 2016. It will be part of the Spring District development project in Bellevue. GIX will start with a 15-month master’s degree in technology innovation, focused on the growth in connected devices, for about 30-35 students.

Over the next decade, enrollment could grow to as many as 3,000 students with the addition of more degrees and programs, in collaboration with tech companies and non-profits.

“We are going to celebrate the U.S. Open for about a week, and GIX for about 100 years,” said Washington Gov. Jay Inslee, as part of his remarks at the event.

Microsoft is “deeply committed to a long-term partnership with GIX,” said Nadella at the event, before the key players signed the agreement establishing the partnership in digital ink on a Microsoft Surface Hub large-screen computer.

“GIX represents a unique and equal partnership between two of the world’s leading universities, backed by one of the world’s leading companies, with others expected to join, and located in a region renowned as a center for innovation,” organizers say in a summary of the project. “Within a decade, we expect that more than 3,000 learners will be studying at GIX, in a holistic, project-based environment.”

This won’t solve the region’s computer science education crunch in the short term. But Brad Smith, Microsoft’s general counsel, says he believes the institution could have the same type of long-term impact that Stanford University has had in California, putting the Seattle region at the forefront of future trends in technology and innovation.

Smith initially went to UW leaders in the fall of 2012 with the idea. Given the trend of U.S. universities establishing campuses in China, he said, “It just seemed to me that the real prize would be to bring great universities from China to the United States.”

Microsoft was able to help based on its longtime relationships with both Tsinghua University and the UW, but Smith credits university leaders with taking the initial “half-baked idea” and making it a reality.

Although Microsoft is the initial company on board, Smith said it will be critical to ensure that it’s not the only company involved. UW and Tsinghua are also planning to add other university partners, and work with a variety of companies and non-profits. 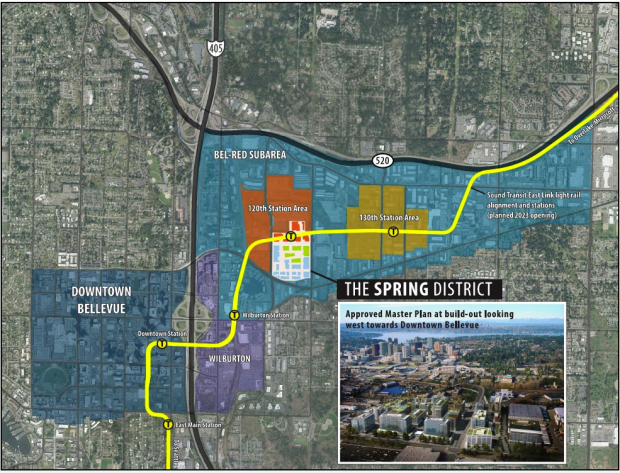 The choice of the new Spring District neighborhood is also a testament to the city’s planning said Bellevue Mayor Claudia Balducci. Light rail service, slated to begin in 2023, will connect the site to downtown Bellevue and the Microsoft campus in Redmond.

“It’s absolutely going to put us on the map, even more than we already are,” Balducci said. “We’re already a hub of technology and innovation, and now we’re going to have this educational connection to the University of Washington and China.”

GIX is expected to be in a temporary location to start, before the 100,000-square-foot building comes online at the Spring District.

Initial students will come from Tsinghua and the University of Washington, but over time, GIX will attract students from other schools, as well, said UW interim president Cauce.

Organizers say in a summary of the project, “GIX further reinforces the Seattle metropolitan area’s position as not only a leading hub for cutting edge technologies, such as cloud computing, Internet of Things, life sciences, mobile health and smart cities, but also as a key connection point between the U.S and the dynamic economies of Asia. GIX is based on the conviction that effective work to address major scientific and technical issues on a global scale will require ever-increasing coordination between China and the United States.

They add, “GIX offers an important vehicle for strengthening technical, economic, and political understanding and cooperation between the world’s two leading economies.”

The news today follows the announcement last week that Microsoft will give $10 million toward a new Computer Science & Engineering building at the University of Washington.

Updated at 2 p.m. with details from announcement. Updated on 6/22 to clarify enrollment details.