Yes, this is ANOTHER update on Amazon’s future drive-up grocery store in Seattle’s Ballard neighborhood — and, no, it still isn’t open yet.

But construction workers are making progress on the site, with new parking spots painted and a mysterious wrapped object attached to a pillar. Is it a tablet where customers can punch in an order? A camera that lets the store know when customers arrive? A scanner that recognizes your face, figures out what you had for dinner last night and then queues up those same items?

Amazon has yet to publicly acknowledge the store and did not return a request for comment Monday. 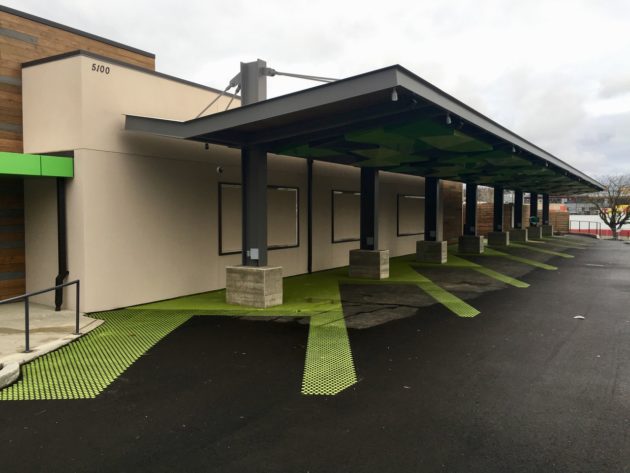 Another indication that the Ballard grocery opening is on the way soon came last week when GeekWire reported that AmazonFresh has applied to sell beer, wine and spirits at the store. Amazon also plans to sell beer and wine at its Amazon Go store at the company’s new campus north of downtown Seattle.

According to permitting documents uncovered by GeekWire last year, customers will be able order their groceries online, drive to the store and have their items brought out to them. Customers will also be able to go inside and place orders on a tablet.

We also checked on the progress of the second Amazon pick-up location in Seattle’s Sodo neighborhood south of downtown. That project is coming along as well, with the canopy and parking area taking shape. The site is not as large as the Ballard one, leaving little space for the physical store, so it’s possible that the grocery will be inside the adjacent Starbucks Center building. GeekWire found last year Amazon is named at least three times in planning documents for the renovation of the former Sears space in the building.

In December, Amazon unveiled its Amazon Go concept but opened it only to employees. The store, which boasts checkout line-free shopping, is expected to open to the public sometime early this year. Amazon may also be planning another store in Seattle, this one in the Capitol Hill neighborhood.