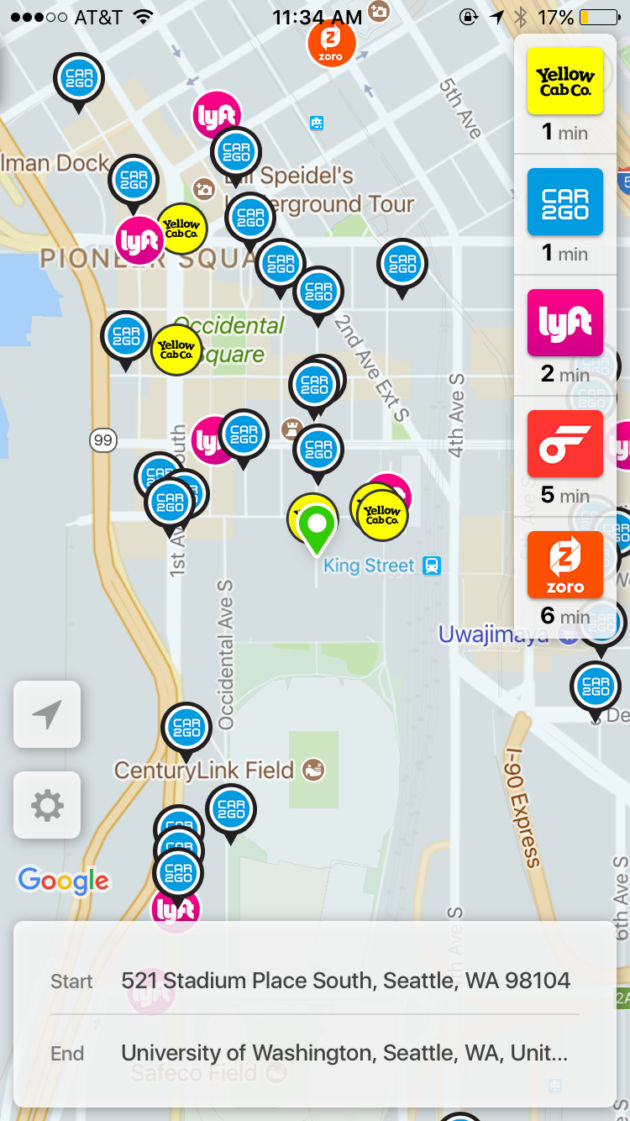 After months of beta testing, Migo’s transportation app is out in the wild.

The Seattle startup today officially launched its new iOS app that acts as a real-time search engine for on-demand transportation services in Seattle and Portland.

As GeekWire reported earlier this year, Migo aggregates different transportation options, with real-time data on price estimates and wait time. The idea is to allow users to quickly and easily assess which service is most convenient at any given time, without having to shuffle through different apps.

Migo hooks into APIs from apps like Lyft to funnel available options into its own app. For apps that do not have APIs, Migo has developed its own virtualization platform that lets it re-represent external app data into Migo itself.

At launch, Migo’s app includes services like Lyft, car2go, Seattle Yellow Cab, and others. Users can hail, reserve, and pay for a ride from Lyft or car2go — which just passed the 100,000 user milestone in Seattle — all within the Migo app after they link their existing accounts.

There are obvious services not included yet in the app, like Uber or BMW’s ReachNow car-sharing service. Migo said that in-app payment for other partners “will expand in the future.”

In April, Migo CEO Jeff Warren told GeekWire that in order to get all providers on Migo, and particularly the dominant ones, “you have to have a value proposition for them: new customers or incremental business.”

“Over time, just like we saw with Expedia, everyone will join, but we have to be at scale where we’re interesting to everybody,” said Warren, who previously led groups working on mobile products and regional marketing at Expedia.

Migo is free for users; it makes money by charging a per-hail fee and a customer creation fee. The company has eight full-time employees and has raised $2.3 million to date from investors like Second Avenue Partners, a Seattle-based firm co-founded by Nick Hanauer; VIA-ID, a European mobility-focused fund; and Wavemaker, a Los Angeles-based early-stage VC firm.