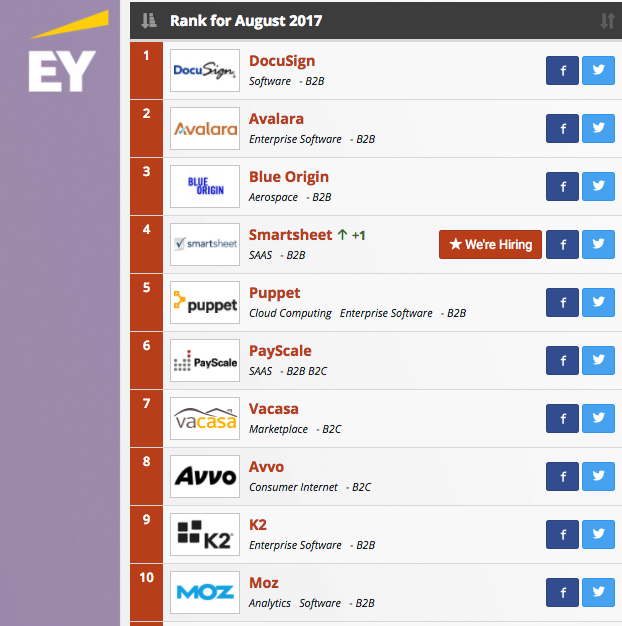 Summer vacation is apparently not a thing among the GeekWire 200 list of the top Pacific Northwest startups.

Companies up and down our board have been making big business moves this summer, and it led to more startups taking significant leaps up the list this month than at any time in the last year. We counted 23 startups this month — more than 10 percent of the list — that jumped more than 10 spots. The jumps came from a variety of industries, but cloud computing and sports-related startups were among the most well-represented groups.

DocuSign retained the top spot in the GeekWire 200 this month, after previous leader Redfin departed in July following its IPO. The digital signature giant is followed by tax automation tech company Avalara, space exploration venture Blue Origin, work management technology company Smartsheet — which climbed one spot this month — and software automation company Puppet. Mobile peer-to-peer marketplace OfferUp jumped into the top 20 as it gets ready to move into a new headquarters, and dog-sitting platform Rover also moved up a couple spots.

Domain name registry Donuts Inc., which agreed to acquire Rightside Group for $213 million earlier this year, was by far the biggest mover this month. The now Kirkland-based company rose 75 spots in our ranking to number 57 after releasing an updated employee count for the combined company of 110 people.

It’s football season, which means a whole new batch of sightings of Vicis‘ high-tech helmet, and a nice bump of 12 spots on the GeekWire 200 to land the Seattle startup at number 93. Numerous Seattle Seahawks sported the innovative lid in the team’s latest preseason contest against the Kansas City Chiefs. Fullback Marcel Reece donned the Vicis dome for the game and told GeekWire it feels a bit heavier and noted how it offers a wider field of view than traditional helmets.

“On actual impact it is a little more comfortable,” he added. “You don’t really feel that initial movement in there.”

The ZERO1 helmet, developed over the past four years, features a unique design that is meant to mitigate the forces thought to cause concussions. Unlike traditional helmets, the outer shell on the ZERO1 is deformable and yields much like a car bumper upon impact. There is also a layer of flexible columns in the helmet that can absorb impact before it reaches a head.

Vicis, which spun out of the University of Washington in 2014, has shipped its $1,500 helmet to nearly every NFL team — almost half have officially placed orders for more — and a variety of top college football programs. Vicis recently garnered national attention after its helmet finished first in the NFL’s 2017 Helmet Laboratory Testing Performance Results, which assessed 33 helmets that could be worn in the upcoming 2017 season and determined which was best at reducing head impact severity experienced by players during games.

Tango Card is going global. In late June the Seattle startup announced that it landed $10 million in debt funding to expand its digital rewards platform and that helped it rise nine spots to number 81 in this month’s rankings. CEO David Leeds told GeekWire in June that the company plans to use the money to pursue international expansion and speed up the launch of new products.

Tango Card aims to make it easier for companies to provide digital rewards, whether it be a gift card to a well performing employee, an incentive for signing up for a service or a nonprofit donation in a partner’s name. Businesses spend billions annually around the world on these types of rewards, but the system is in need of change.

Tango Card’s headcount has tripled in size over the last three years. It has 70 people working out of its headquarters in the West Seattle neighborhood, and another eight people at an engineering center in Boise. Tango Card plans to hire another 10 people this year.

Versive is still settling into a new name, and a new identity, but that hasn’t slowed down the Seattle security startup, as it climbed 22 spots this month to number 148. Versive started life as Context Relevant and focused on financial services for several years before changing its name in May and reorganizing itself around a new mission.

Just last week, Versive landed $12.7 million to expand its artificial intelligence-backed corporate security offerings. Versive’s technology learns how potential customers are handling current and future threats and helps them figure out which alerts are worthy of a response, which saves time, money, and aggravation if working correctly.

Seattle Esports betting startup Unikrn is taking a different approach to raising money. The Mark Cuban-backed startup recently announced plans to sell $100 million in cryptocurrency “tokens” as part of an initial coin offering, or ICO. The ICO isn’t until next month, but GeekWire 200 is all about the here and now, and this month Unikrn rose 20 spots to number 161.

Founded in 2014, Unikrn employs 30 people across offices in Seattle, Berlin, Sydney, and Las Vegas. It was named a Seattle 10 startup in 2015.

Ten startups made their debut on the GeekWire 200 or returned to the list in August. They are: HERO Sports, HaloSource, Rival IQ, Just Biotherapeutics, Fleet, Wrench, Koru, Demand Energy Networks, FlyHomes and DefenseStorm.