LAS VEGAS — There are tons of big-name sports stars at CES this week checking out the giant technology expo for the first time as more and more players take interest in the tech world.

This isn’t the first CES rodeo for NFL-star-turned-entrepreneur Warren Moon, though.

GeekWire met up with the Hall of Fame quarterback and current Seattle Seahawks radio analyst at CES on Friday before Moon spoke on a panel hosted by SFIA about fan engagement and how data is being used today in sports at all levels.

Moon is a CES veteran of sorts, having first attended the show many years ago as a player, making appearances for companies like Samsung.

But now the 60-year-old is at CES on behalf of Sports 1 Marketing, a sports and entertainment agency he co-founded seven years ago that works with top brands and teams on a variety of projects.

Moon, a 9-time Pro Bowl selection and the 1990 NFL Most Valuable Player, told GeekWire that Sports 1 Marketing places a big focus on using technology to help fuel its business. The agency has developed its own aggregated marketing platform, for example, that it uses to maximize opportunities for clients.

“Technology is a huge part of everything going on in all aspects of our world, but definitely in sports and entertainment,” Moon said.

After speaking on the panel, which included Sports 1 Marketing co-founder Meltzer and folks like Microsoft Corporate VP and Chief Evangelist Steve Guggenheimer, Moon was on his way back to Seattle to call Saturday’s big Wild Card playoff game between the Seahawks and Lions.

Moon predicted that the Seahawks, favored by eight points, will win. He said the raucous, earthquake-causing home crowd will provide a big advantage, particularly because the Seahawks seem to play more energized at home, Moon noted. 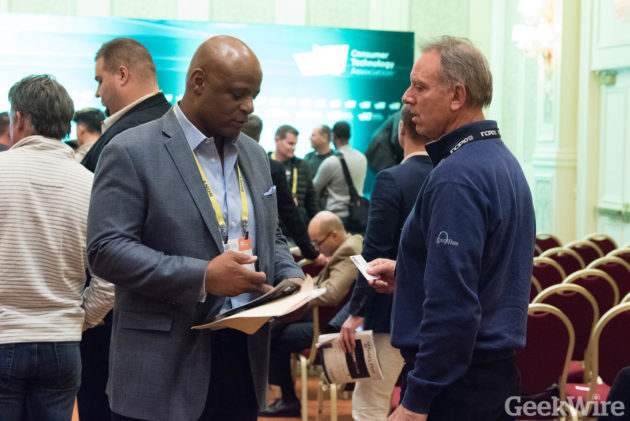 But despite Detroit visiting Seattle on a 3-game losing streak and plagued by some injuries, the Seahawks can’t take their opponent lightly.

“This is a team that has eight come-from-behind wins, so they won’t go away and won’t quit,” Moon said. “They have a quarterback in Matthew Stafford who is a fighter and a gunslinger. If he gets hot, he’ll be a tough guy to put out. The Seahawks better come out and get off to a great start early.”

Moon added that the crowd noise may be even more important given that Detroit has a few back-up offensive lineman playing in the game.

“That’s an advantage for Seattle because our defensive line is playing really well right now,” he said.

Moon, who in 2006 became the first African-American quarterback inducted into the Pro Football Hall of Fame, also talked about the intersection of technology and football, noting how tech has helped improve in-helmet communication between quarterbacks and coaches on the sideline. He also likes seeing the Surface tablet being used by players and coaches during games.

“Just being able to come off the field and seeing what the defense or offense was doing on that particular series, and making those adjustments — it’s so much quicker than waiting for those old polaroids to come down from the press box,” he said.

Here’s a video of our chat with Moon: