Today, Expedia reported $2.2 billion in revenue for the first quarter of 2017, a 15 percent increase over the same period last year, with earnings of 5 cents per share. Expedia narrowly missed analysts’ expectations, which predicted earnings of 6 cents per share on revenue of $2.1 billion.

Expedia posted a net loss of $86.1 million, an improvement from a loss $108.6 million in Q1 of 2016. The Bellevue-based online travel giant’s gross bookings (including HomeAway reservations) increased by 14 percent.

Here are the results from Expedia’s financial release: 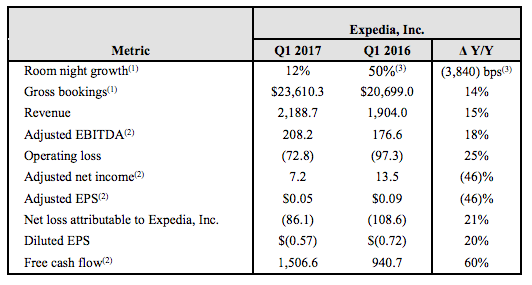 One wild card during the first quarter of this year was President Donald Trump’s executive orders on immigration. Though his stalled travel bans didn’t come to fruition, some travelers canceled plans to visit the U.S., while others decided not to book trips here.

During Q1, Expedia named Chelsea Clinton — daughter of former president Bill Clinton and former Secretary of State Hillary Clinton — to its board and pledged to keep a satellite office in its hometown of Bellevue after moving its headquarters to Seattle in 2019.

Easter — and the uptick in travel that goes with it — also shifted into the second quarter of this year.

For several years, Expedia was on an aggressive hiring spree, gobbling up companies like HomeAway, Travelocity, and Orbitz. The dust is finally settling from those acquisitions, according to CEO Dara Khosrowshahi.

“It’s great to have that team refocused on the core business and not so focused on integrations,” he said during Thursday’s earnings call. “They did a phenomenal job with those integrations but as we all know they did take a toll on the results. But that team is thrilled to be back to business as usual.”

Expedia reported $2.1 billion in revenue for the fourth quarter of 2016, a 23 percent year-over-year increase. Some of that came from the acquisition of HomeAway, which brought in $166 million in revenue.

Khosrowshahi ended that earnings call with a decidedly bleak sign off. “A big thank you to our global employee base for an improved 2016 and certainly an improved end to the year,” he said when asked for final comments. “Hopefully, we will all be alive to see the end of next year.”

So far, we’re hanging in there but it is only Q1.