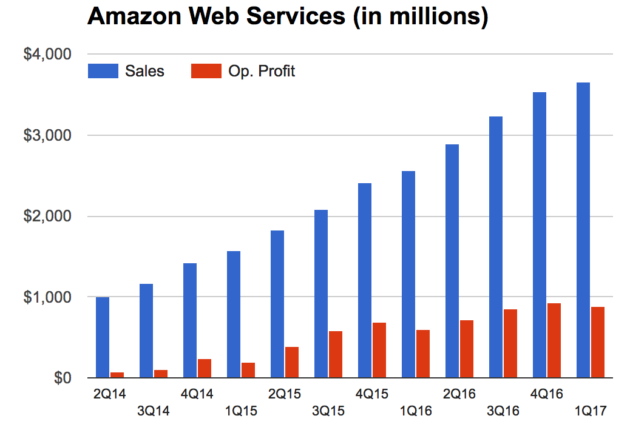 The crown jewel of Amazon’s business, Amazon Web Services, posted a 42 percent jump in revenue during the first fiscal quarter of 2017, as it continues to set the standard for cloud computing.

For the period ending March 31st, AWS recorded revenue of $3.66 billion, up from revenue of $2.57 billion in the year-ago quarter. Operating income rose 47 percent compared to last year to reach $890 million, which provided the lion’s share of the total operating income for its parent company during the quarter.

AWS revenue growth does appear to be backing off the torrid pace it enjoyed a few years ago, but 42 percent is still pretty strong. The company announced it captured several new high-profile customers during the quarter, such as Dunkin Brands, Liberty Mutual, and IPO darling Snap, which had previously relied on Google for the bulk of its cloud infrastructure.

On a conference call with reporters following the release of the results, Amazon CFO Brian Olsavsky acknowledged that AWS growth had dipped a bit, and said the division is still on pace to do $14 billion in annual revenue, the same number quoted last quarter. He also highlighted database growth during the quarter — a topic Amazon brought up several times last week at its AWS Summit in San Francisco — saying that over 23,000 databases had been migrated to AWS since January of last year.