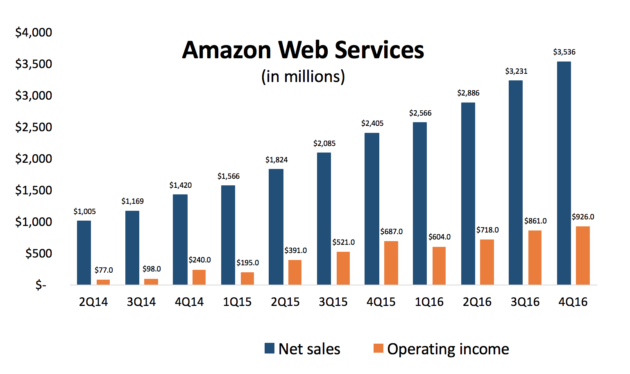 On a post-earnings call with reporters, Amazon CFO Brian Olsavsky noted that AWS has now reached a $14 billion annual run rate. AWS posted $12.2 billion in sales for 2016 and more than $3 billion in profit.

Olsavsky noted that Amazon has a “very balanced group” of customers, from startups to small-and-medium-sized businesses, all the way to large enterprise and the public sector.

“We’re seeing strong usage growth across all those groups,” he added.

While AWS revenue spiked 47 percent from the year-ago quarter, that’s a lower clip than year-over-year growth for the past several quarters. For example, the $2.4 billion in AWS revenue during Q4 2015 was up 69 percent year-over-year.

Amazon has come to depend on AWS to fuel the rest of its sprawling business and feed its global ambitions. It’s impossible to say how Amazon would be managing its expenses and profit margins if it hadn’t launched AWS more than a decade ago. But it’s clear that AWS has emerged as a huge economic engine.

Amazon said it released 308 new services and features for AWS last quarter; there were 1,017 total upgrades released in 2016. The company also unveiled a bevy of new AWS-related services and products at its annual re:Invent conference in December.

AWS, used by Amazon itself and customers like Netflix who pay for computing power, competes with other cloud computing products from companies like Google and Microsoft.

Shares of Amazon dipped in after-hours trading after the company missed expectations for total revenue.