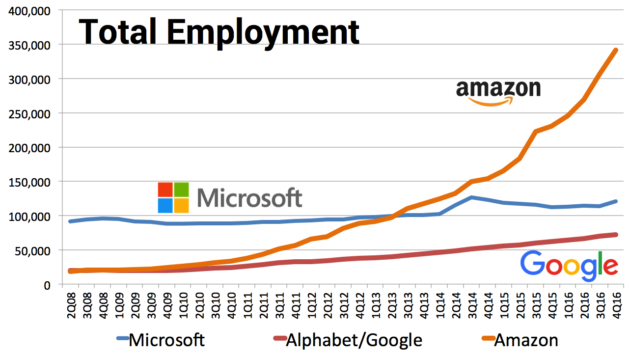 Amazon added more than 110,000 employees during the past year, topping 341,000 people as of the end of 2016 thanks largely to a significant increase in the Seattle-based tech giant’s network of fulfillment centers around the world.

RELATED: United States of Amazon in 2017: Interactive graphic shows where the tech giant is growing now

The new numbers, disclosed in the company’s fourth-quarter earnings report, continue a remarkable growth streak that stretches back several years. They do not include seasonal or temporary workers.

Amazon employed just 32,000 people globally five years ago. Amazon’s net growth of more than 110,000 people during the past year almost rivals Microsoft’s total employment of 120,000 people as of Dec. 31.

That comparison of Microsoft and Amazon isn’t apples-to-apples given the differences in their businesses, but it gives a sense for the scope of Amazon’s employment base. Amazon employs about 40,000 people in Washington state — more than 25,000 of them in Seattle — compared to 45,000 for Microsoft.

Amazon doesn’t show any signs of slowing down. The company said previously that it plans to add another 100,000 full-time jobs in the U.S. over the next 18 months.

Asked about employment growth a conference call with reporters today, Amazon CFO Brian Olsavsky said the company increased its fulfillment capacity by 30 percent over the past year, adding 26 new warehouses in 2016, about 23 of which came online during the second half of the year.

“The headcount that you see in Q3 and Q4 is dominated by that addition in fulfillment capacity,” Olsavsky said. “Keep in mind we’re also adding Amazon delivery capability as well as building teams around the Echo, Alexa, AWS, Prime Video and a lot of the Prime benefits that you see. But the predominant factor is still the headcount in our fulfillment area.”

An analysis of Amazon’s 2016 employment growth by GeekWire found significant growth not just at its headquarters in Seattle, but also in many Midwest and Southern states, as the tech giant fills in its distribution footprint in the country.