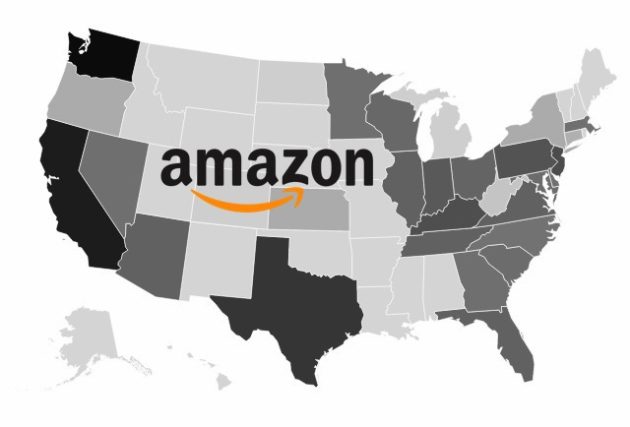 Amazon, the Seattle-based tech giant, has been growing at a blistering pace over the past five years — and a new analysis by GeekWire reveals where the company’s latest growth has been taking place.

Among our findings: Amazon saw significant growth in 2016 not just at its headquarters in Seattle, but also in many Midwest and Southern states, as the tech giant fills in its distribution footprint. In one state in particular, Ohio, the company has grown from a handful of employees to thousands in just a year.

Amazon’s network of Prime Now hubs nearly quadrupled over the past year across the country.

Our analysis started with data released by Amazon showing its approximate state-by-state employment as of the end of 2015, which was the subject of a previous GeekWire report on this topic. This time, we compared the earlier numbers to the latest numbers from the company as of the end of 2016, to see growth patterns.

We’ve also used numbers from logistics consultant MWPVL International on Amazon’s fulfillment and distribution network in the country — showing a company almost bursting at the seams.

We worked with Microsoft’s Power BI visualization software to assemble this data into interactive maps and charts which show Amazon’s employees and facilities in each state, as well as how the company has grown over the past year. Explore the maps and charts above by using the arrows to view different pages, and click the pair of arrows in the lower right-hand corner to view the graphic full-screen.

It’s a notable example of a company expanding its U.S. footprint at a time when President Trump is pushing to keep and retain U.S. jobs, although Amazon’s growth — fueled in part by the automation of its distribution centers — is also a threat to employment at traditional retail companies.

Worldwide, in the third quarter of 2011, Amazon reported just over 50,000 employees. A few months ago, the company announced that it now employs over 300,000, not including part-time or seasonal workers, and plans to add another 100,000 full-time jobs in the U.S. over the next 18 months.

The company will release its official worldwide employment count with its earnings Thursday afternoon.

Some of those employees are developers and executives working on Amazon’s e-commerce operations, along with other tech functions like AWS, its public cloud. And many are staff at Amazon’s growing network of fulfillment and distribution centers, which house and sort products as they make their way to customers.

According to the data we’ve collected, Amazon has been heavily investing in its distribution and fulfillment network across the country.

The company almost doubled the number of its fulfillment centers — Amazon warehouses where goods are sent to customers— going from 58 in 2015 to 103 in 2016. And it more than doubled the number of sortation centers and delivery stations — which make up Amazon’s internal distribution network — from 28 to 61.

Amazon almost quadrupled the number of Prime Now hubs, from 14 to 41.

And taken on a state-by-state level, these numbers can have a huge impact: many of those facilities were opened in states which had little to no Amazon presence before 2016.

Ohio is the most dramatic of these cases: in the past year, Amazon has opened two fulfillment centers, one sortation center, and two Prime Now hubs in the state. The company had only a few dozen employees there at the end of 2015. Now, there are almost 6,000.

The numbers also show notable trends in the growth of Amazon’s workforce and facilities over the past year. For instance, in 2015, Amazon’s employees were largely concentrated on the West Coast and in the Northeast, with Texas being a notable exception. The company had no presence in large chunks of the West, Midwest, and South.

While these two trends are generally still true, Amazon has greatly expanded its presence in the Midwest and the South. Georgia, for example, went from 550 Amazon employees to 3,000. Kansas went from 150 to 1,000.

And in these two states, as with the majority of states that have seen an increase in employees this year, that growth has been fueled by expansion Amazon’s physical facilities, including Amazon Prime Hubs and Amazon Fresh and Pantry locations, along with fulfillment, sortation and delivery centers.

The highest concentration of Amazon employees remains on the West Coast, with Washington and California boasting 40,000 and 30,000 employees each.

Those states were also among the biggest benefactors of Amazon’s overall employee growth in 2016: Washington received 18 percent of the company’s employment growth, and California received 13 percent.

Texas received 16 percent of that growth, opening 5 new Prime Now hubs and 5 new fulfillment centers and launching it into the third spot with respect to overall employee count.

Last year, Kentucky had the third highest number of Amazon employees, but this year has dropped into fifth, with 12,000 employees, as it was surpassed by Texas with 20,000 and New Jersey with 13,000.

Amazon’s corporate headquarters in Seattle have been expanding consistently over the past few years and is the home to the largest number of Amazon employees. Amazon employs 40,000 people in Washington state, up from 26,500 employees a year earlier.

Several Amazon retail locations are also popping up around the city, pointing to the possibility of even more frantic growth as Amazon delves into this new aspect of their business.

All this data points to a heavy emphasis on Amazon’s physical retail presence: from transporting its own products using the sortation and delivery center network, to dramatically increasing Prime Now hubs, to opening its own retail locations. It won’t be a surprise to see even more investment in these areas as the company continues to grow in the coming years.