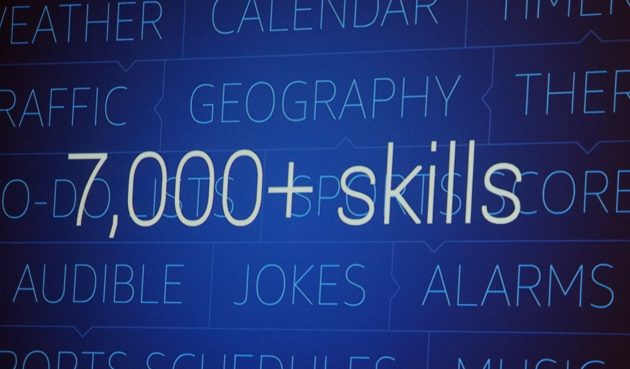 LAS VEGAS — Amazon said this week that there are now more than 7,000 Alexa skills, third-party integrations that extend the capabilities of its voice platform. But that’s just the beginning of the company’s ambitions.

“Voice is the new UI,” said Dave Isbitski, chief evangelist for Alexa and Echo, kicking off a day of Alexa sessions at the Consumer Electronics Show this morning, speaking to a packed room of attendees. “At Amazon, we believe that there will be an Alexa skill for everyone, for everything.”

Amazon has dominated CES with a series of integrations of its Alexa voice-enabled assistant into a variety of devices, from cars to refrigerators. Today at the show, the company is hosting a dedicated track for attendees to get a deep dive on Amazon’s plans for its AI assistant.

The first session started with a glimpse of Amazon’s ambitions for the voice platform, as a real-world incarnation of the Star Trek computer, able to answer questions, complete tasks and control the environment around the user through simple commands.

Alexa skills are analogous to apps — new features created by third-party developers to extend the capabilities of Alexa-powered Echo devices from Amazon and, increasingly, a variety of devices from outside hardware developers. “It reminds me of the early mobile days, when you’d get word of mouth,” Isbitski said.

One key for developers of Alexa skills, he said, is to track the questions customers ask and adjust the interactions based on what they see. He cited the example of CapitalOne creating an Alexa skill and adjusting to answer the common question, “How am I doing?” by giving basic details on the customer’s balance and financial standing. 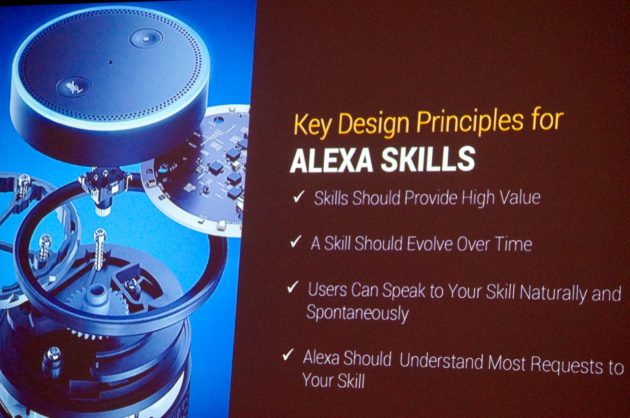 Amazon has an early lead in the market, but it faces growing competition from other tech giants including Google and Microsoft. Amazon’s lead is notable in part because it doesn’t have the advantage of launching Alexa on a smartphone yet, in contrast with Apple’s Siri and others.

During the first session today, Isbitski reiterated a statement that has become a mantra for the company: “We believe that voice will be the next major disruption in computing.”

Charlie Kindel, director of Alexa Smart Home, cited evidence including the strong interest in Alexa and favorable reviews of Amazon’s Echo devices. He pointed out that major tech disruptions come about once a decade, from the graphical interface to the web, to mobile, and now voice user interfaces, which Kindel described as another “major inflection.”

Kindel acknowledged that further improvements of Alexa are needed in areas including natural language understanding. “We also know that it falls short in a lot of ways,” he said. “If you think the capabilities of this product are amazing now, just wait six months, wait another year.”

He said he has about 200 devices in his house that are controlled by Amazon Alexa.