For the third quarter, Amazon reported $1.27 billion for physical store sales — still a small fraction of the company’s $26.4 billion in quarterly online sales, but the fact that Amazon is breaking this out is significant.

On an earnings call with reporters, Amazon CFO Brian Olsavsky said that number is primarily made up of sales from Whole Foods between Aug. 28 — when Amazon completed its $13.7 billion acquisition of the grocery company — and the end of the quarter. Sales from Amazon’s physical bookstores are also included as part of this new section.

“It’s sales where customers are physically selecting items in a store, versus perhaps ordering online and picking up somewhere,” Olsavsky said of the ‘physical stores’ section. “For us, that is principally going to be Whole Foods and Amazon Books. And then as we develop other formats over time, we could see other items in that category.”

Amazon clearly sees opportunity to combine its massive digital presence and tech prowess with brick-and-mortar retail. For example, the company has already installed Amazon Locker package pickup hubs at Whole Foods locations, and plans to integrate its Prime membership program for customers shopping at the grocer.

Prime members also get discounted prices at the bookstores, which sell Amazon devices like the Echo voice assistant and Fire TV.

The company is also testing other physical grocery concepts with two AmazonFresh Pickup sites and the experimental Amazon Go store in Seattle. It has also opened pop-up shops in malls around the country for the past several years and installed vending machines at airports.

In another example of the overlap between physical and digital, Amazon added hundreds of Whole Foods items to its AmazonFresh grocery delivery service after the acquisition. There’s now a Whole Foods online storefront on Amazon’s website. 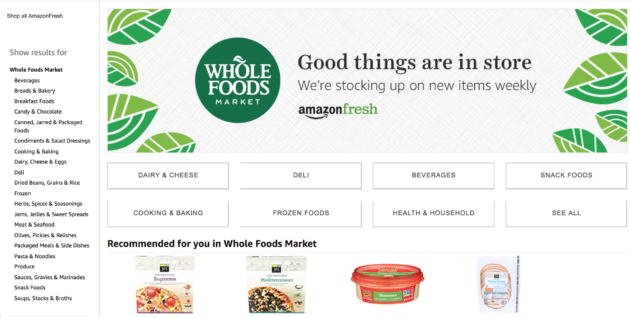 A New York Times report from February noted that Amazon was exploring the possibility of new retail outlets in categories including furniture, home appliances and electronics.

Amazon’s growth in physical retail raises natural concerns among many of the same traditional retailers whose businesses have been undercut by the company’s online domination. In a special report on the company from this past March, The Economist cites the possibility of new regulatory scrutiny for the company in the future. “If Amazon does become a utility for commerce, the calls will grow for it to be regulated as one,” the magazine concludes. “Shareholders are right to believe in Amazon’s potential. But success will bring it into conflict with an even stronger beast: government.”

Amazon isn’t the only retail company thinking about how to bring together digital and physical. Speaking at the 2017 GeekWire Summit, Starbucks CEO Kevin Johnson talked about how the coffee giant is both increasing its physical footprint while building out new digital technologies.

Johnson, a respected veteran tech executive who replaced Howard Schultz as CEO last year, said that there are now more brick-and-mortar retail stores in the U.S. that can be supported. He said this disruption highlights two things for retailers to consider.

“One, you must be focused on experiential retail that creates an experience in your store that becomes a destination for the customer,” Johnson explained. “And number two, you have to extend that experience from brick-and-mortar to a digital-mobile relationship. So our approach to this is investing in elevating the experience we create in our stores, and investing in the digital-mobile connection we have with our customers.”