Over the past decade, traditional brick-and-mortar retailers have gone through a massive disruption as digital tools and the internet change the way people shop. Many have seen in-store sales drop substantially, forcing closures and even company shutdowns.

But Starbucks is an exception. The Seattle-based coffee giant is building 2,000 new physical stores around the globe per year and is seeing some of its highest in-store revenues ever.

So what’s the secret sauce? Speaking on stage at the GeekWire Summit in Seattle on Tuesday, Starbucks CEO Kevin Johnson revealed some of the company’s philosophy related to tying together a physical store experience with digital innovation. 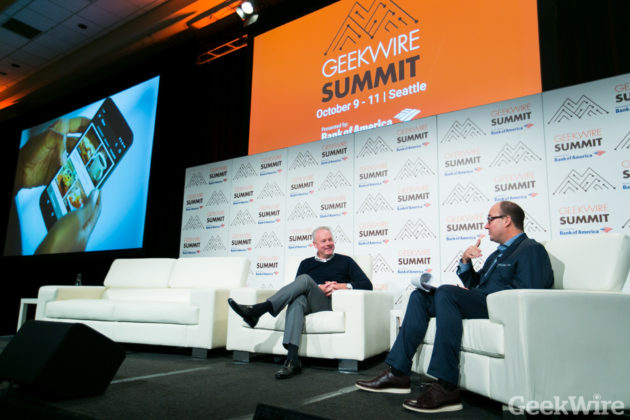 Johnson, a respected veteran tech executive who replaced Howard Schultz as CEO last year, said that there are now more brick-and-mortar retail stores in the U.S. that can be supported. He said this disruption highlights two things for retailers to consider.

“One, you must be focused on experiential retail that creates an experience in your store that becomes a destination for the customer,” Johnson explained. “And number two, you have to extend that experience from brick-and-mortar to a digital-mobile relationship. So our approach to this is investing in elevating the experience we create in our stores, and investing in the digital-mobile connection we have with our customers.”

As it continues to increase its physical footprint — it now counts 27,000 stores across 75 countries — Starbucks is also investing big in digital innovation. The company has long touted its “digital flywheel,” which includes everything from its rewards program, which grew by 8 percent over the past year, to its mobile order-ahead feature, which now represents 9 percent of transactions in U.S. stores. Mobile payment also now accounts for 30 percent of transactions in U.S. stores; that number goes up to 50 percent for the company’s 2,800 stores in China, Johnson said. 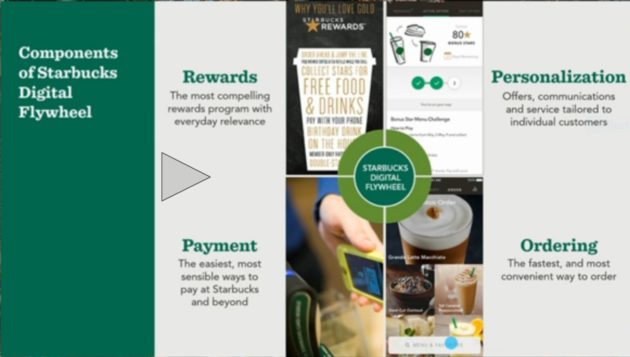 The CEO noted that while more and more people are using their smartphone to purchase Starbucks items, the company still needs to pay attention to the traditional in-store Starbucks experience.

RELATED: Starbucks is a tech company: Why the coffee giant is investing heavily in digital innovation

“Many customers like to come to the store; they want that experience in the store,” he noted. “Many also want the state of convenience. We have to do both and do both well.”

Asked about how Starbucks creates a consistent experience at its stores across the world, Johnson said that “the most important ingredient is the human connection.”

“It’s the baristas that learn your name and know your favorite beverage,” he explained. “They are there to build you a handcrafted beverage to your preferences. And at the end of the day it’s about human connection. If you think about the one thing that every single one of us on this planet have in common … it’s the human experience. We all experience joy and sorrow; we’ve all experienced the struggle and the success. So anchoring on the fact that human beings are tribal people and get energy from one another, if you create an environment where people are connecting with other people at our stores, it works everywhere.”