Cashiers at Amazon’s physical bookstores now ask each customer the same question: Are you a Prime member?

That’s because Amazon recently implemented a new pricing structure at its bookstores that could signal a broader strategy for the company’s brick-and-mortar retail expansion.

At the Amazon bookstore in Seattle’s University Village, Prime members who pay $99 for an annual membership — or $10.99 per month — can purchase books and other items at the same price that they sell for on Amazon.com.

However, if you’re not a Prime member, you pay the list price. 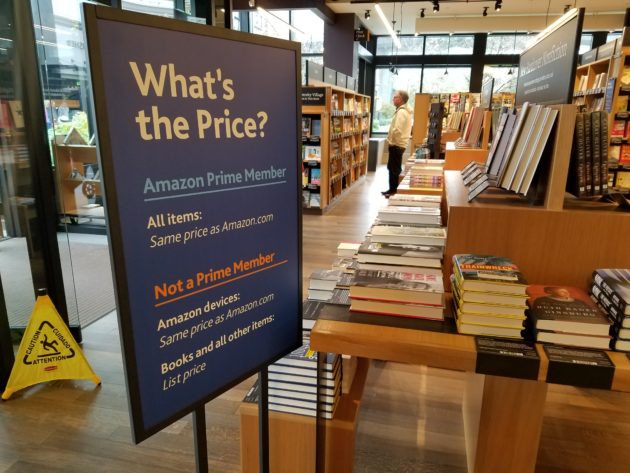 When the Amazon bookstore in Seattle opened almost exactly a year ago — the company’s first full-fledged retail location — book prices were identical to those on Amazon.com, whether you were a Prime member or not.

But now the discounted prices are only available to Prime members. If you’re not, you’ll pay sticker price.

The message: If you’re not a Prime member, you can’t get discounts.

There are no price tags on the books at Amazon’s store, as customers can either scan the book at a kiosk or use Amazon’s app to find out how much each product is. But based on a handful of titles I scanned today, the discounts range from 6 percent to upwards of 40 percent. The kiosks clearly show how much you’d save if you were a Prime member. 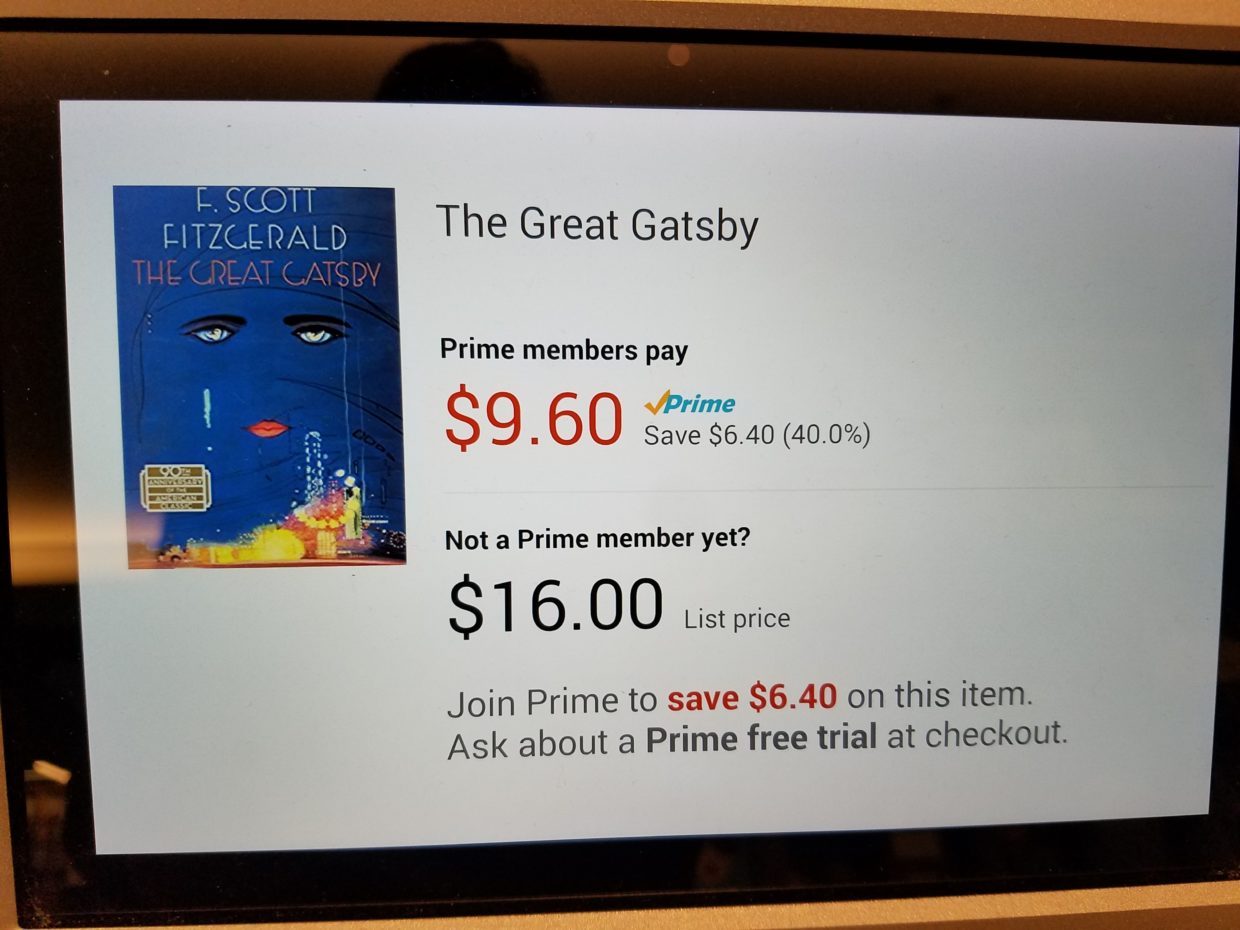 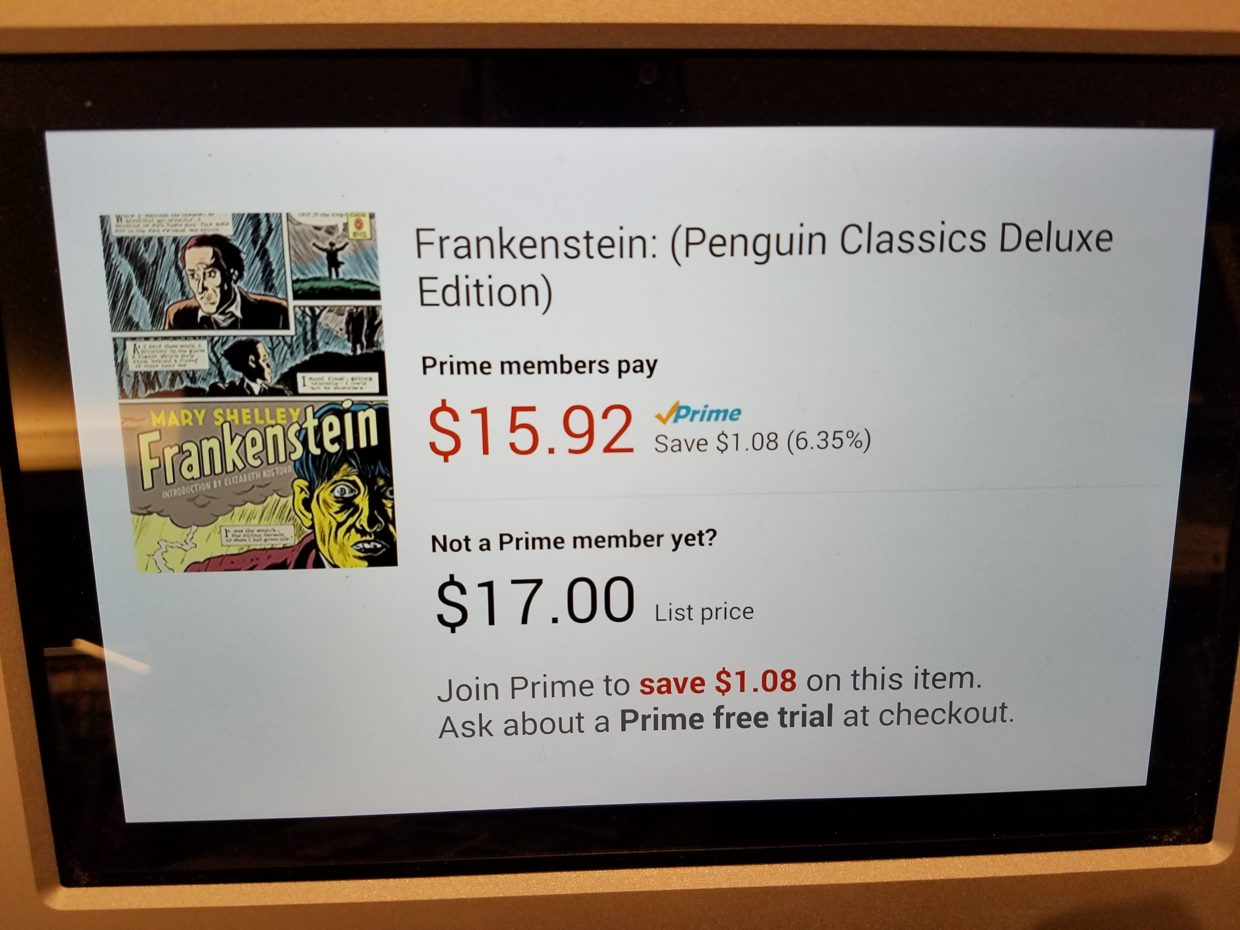 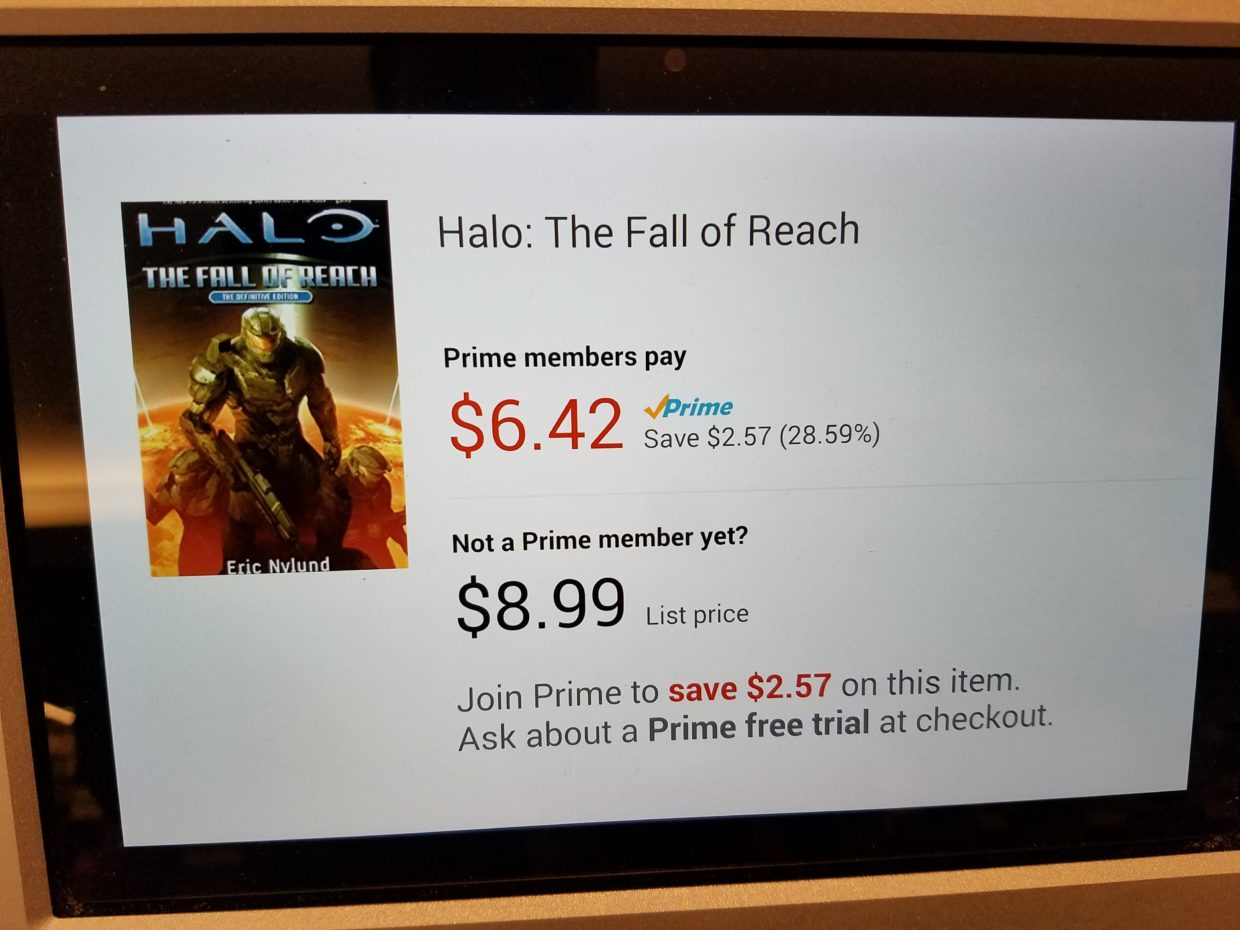 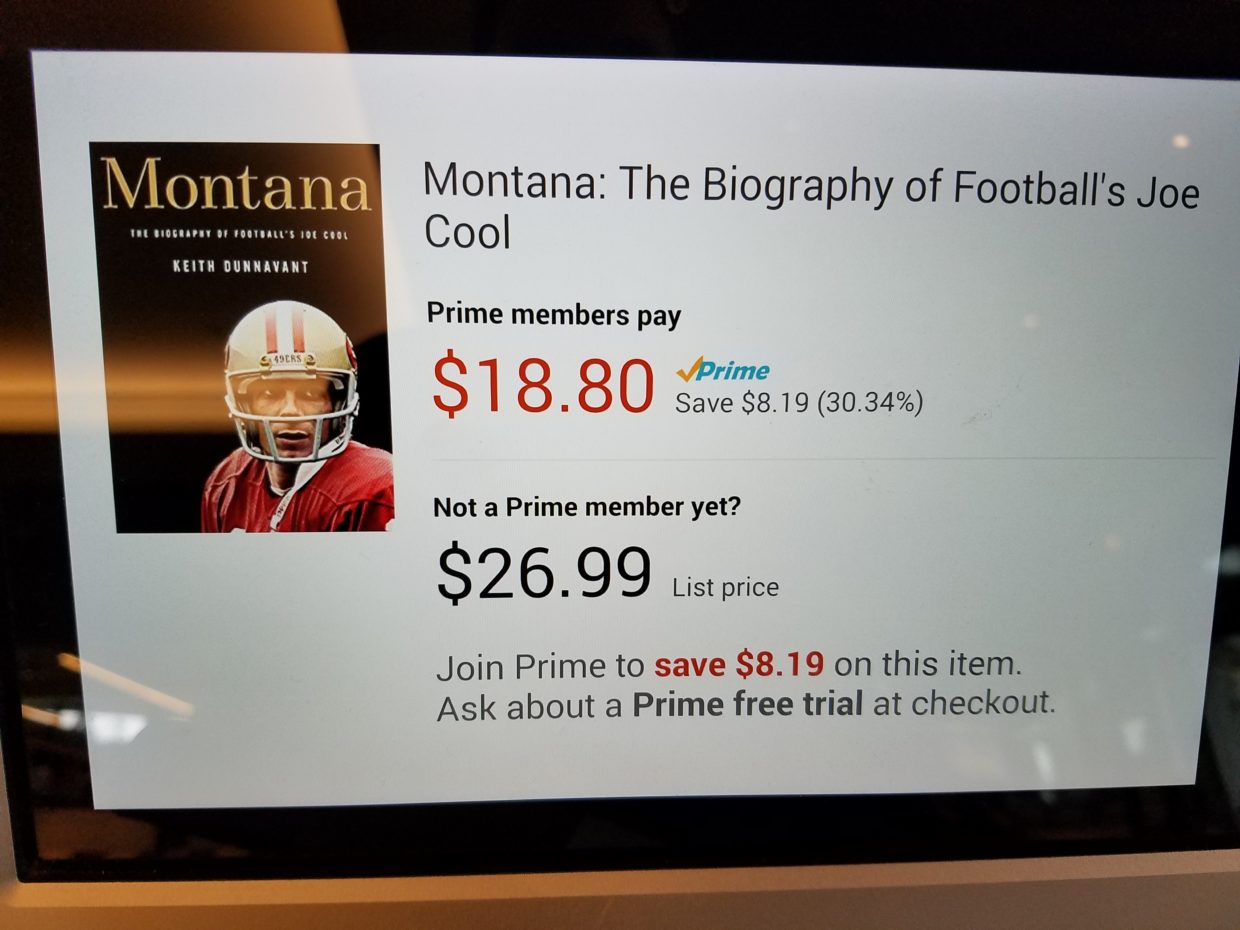 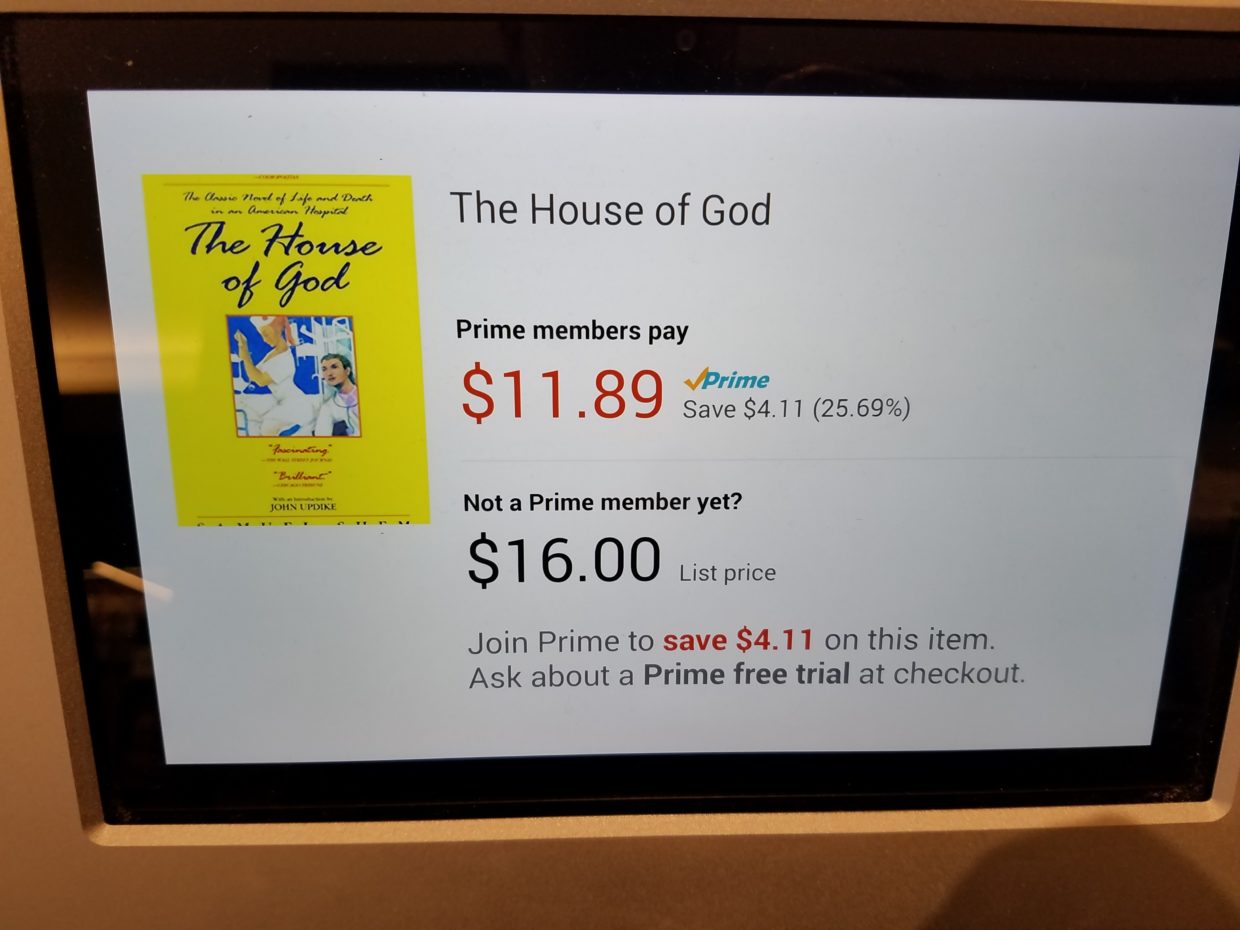 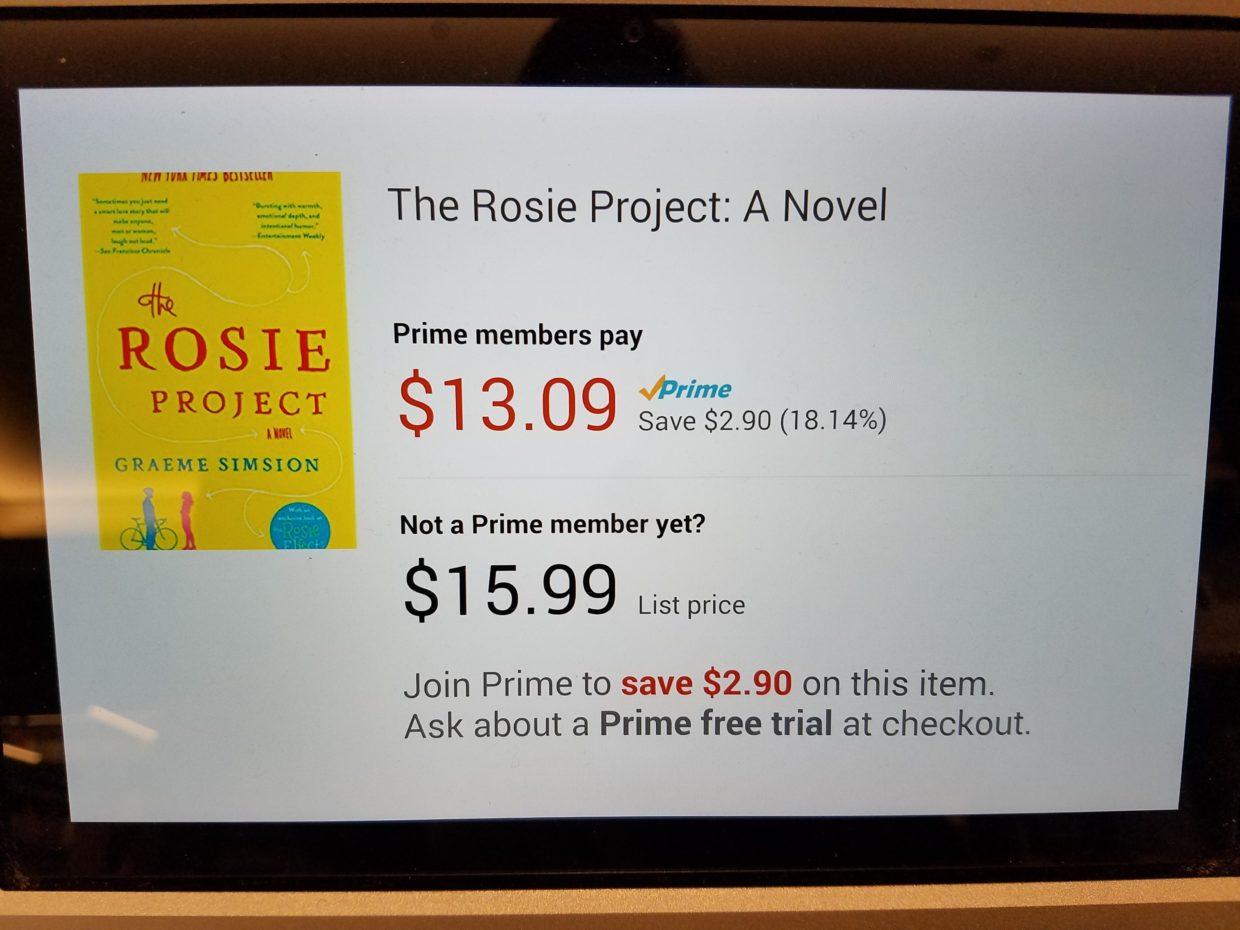 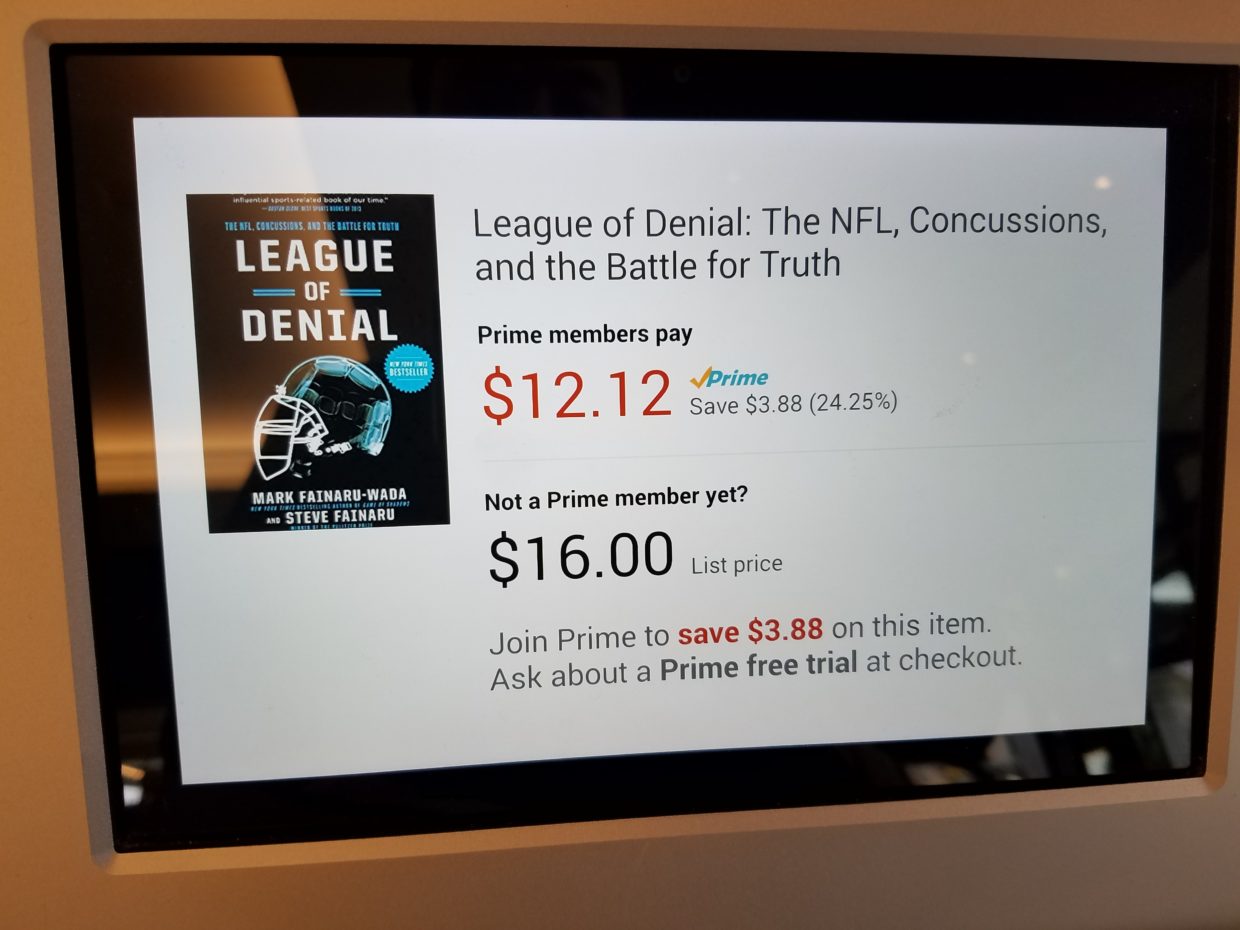 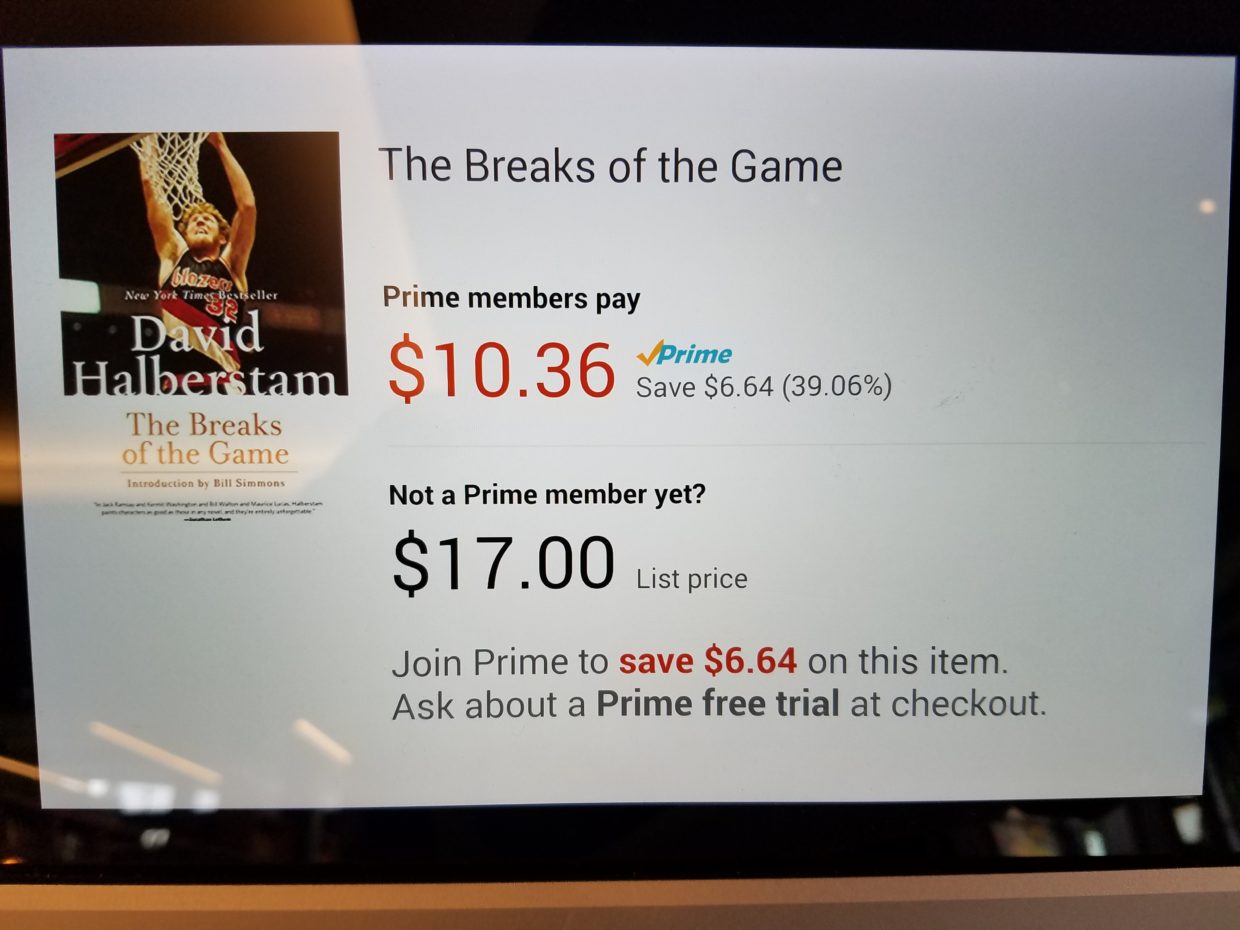 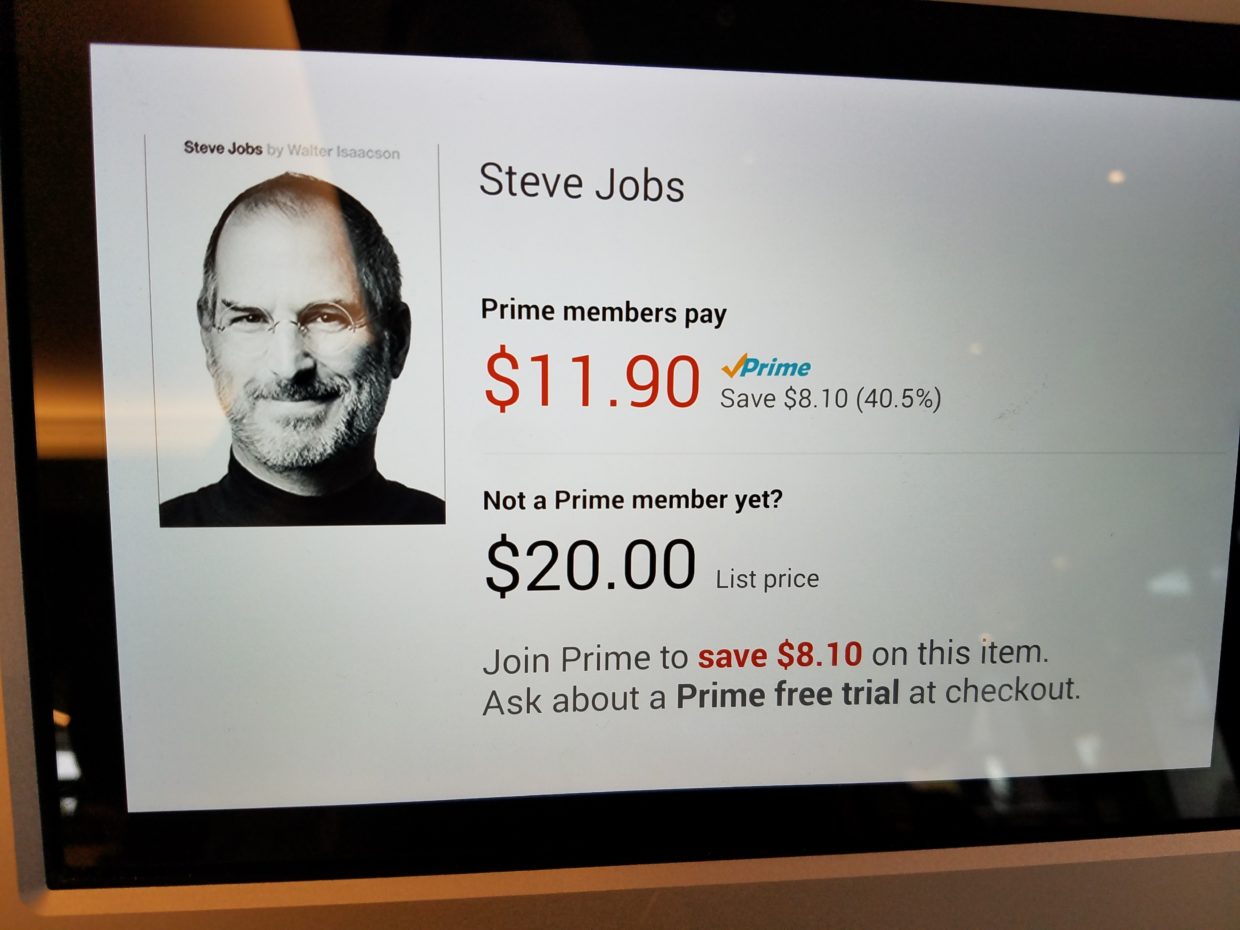 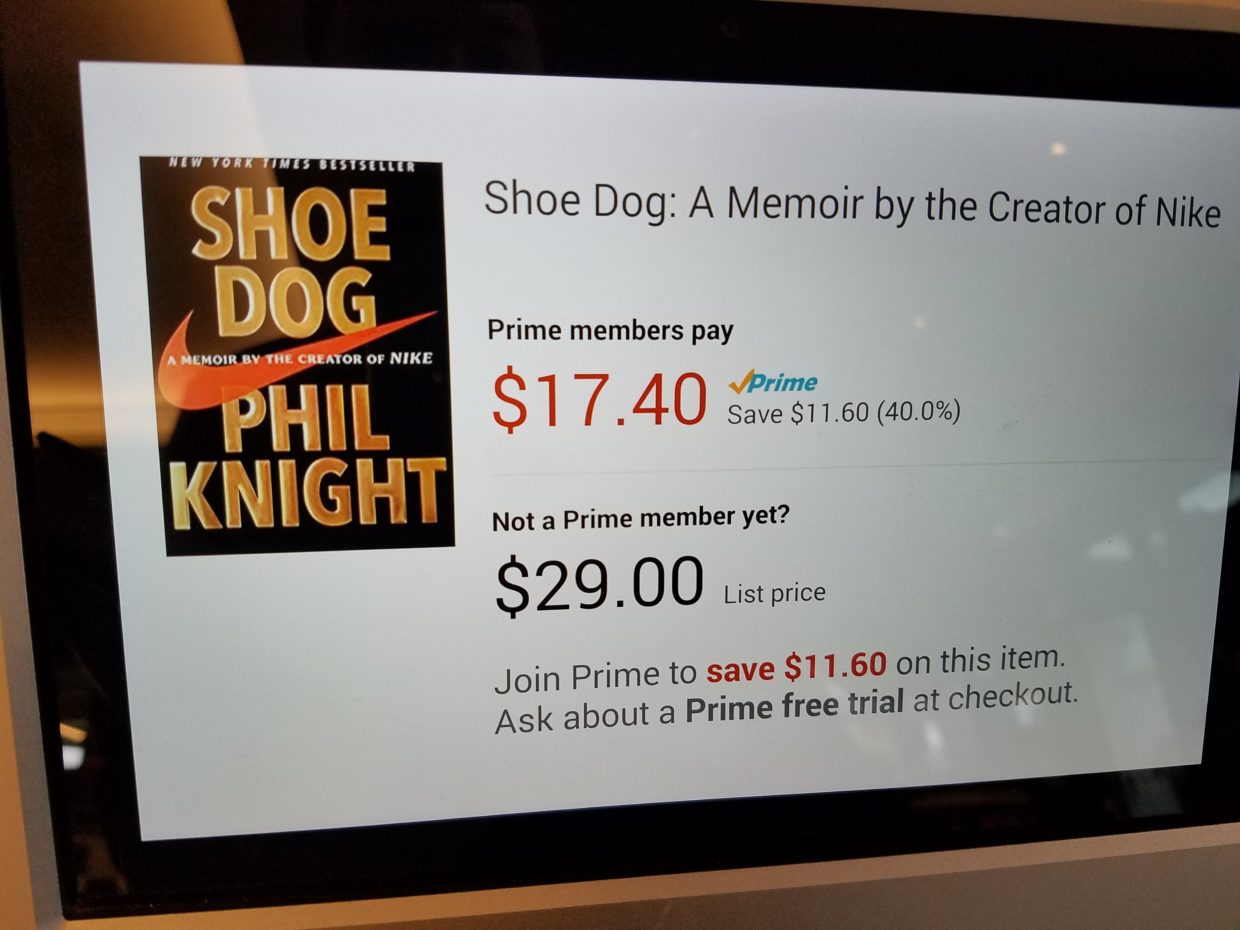 The discounted prices for Prime members do not apply to Amazon’s devices like its Echo voice assistant or Fire tablets that are on display inside the store; non-members receive the same price as on Amazon.com. (Side note: While I was there today, customers were playing with the Echo and asking Alexa questions. This is another reason why Amazon is opening physical retail locations).

An employee said that the new pricing rules started in August and are applicable at Amazon’s three bookstores — in Seattle, Portland, and San Diego. Amazon is preparing to open two other bookstores in Chicago and Boston.

Amazon is now using its physical stores as a way to attract more Prime members. There are plenty of signs around the building that explain the new pricing model, along with some that provide more information about a Prime membership. Customers can sign up for a 30-day Prime trial at checkout. 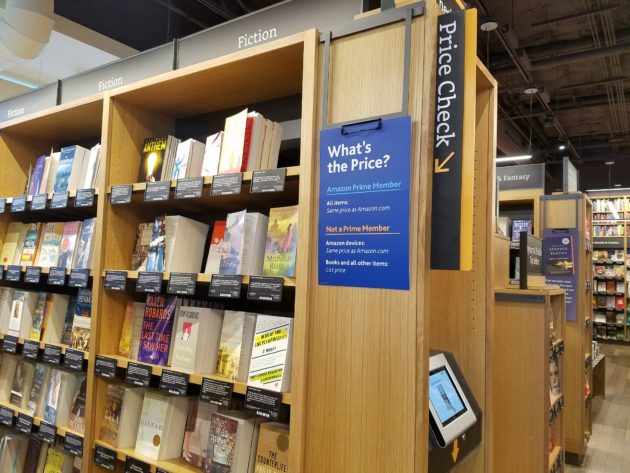 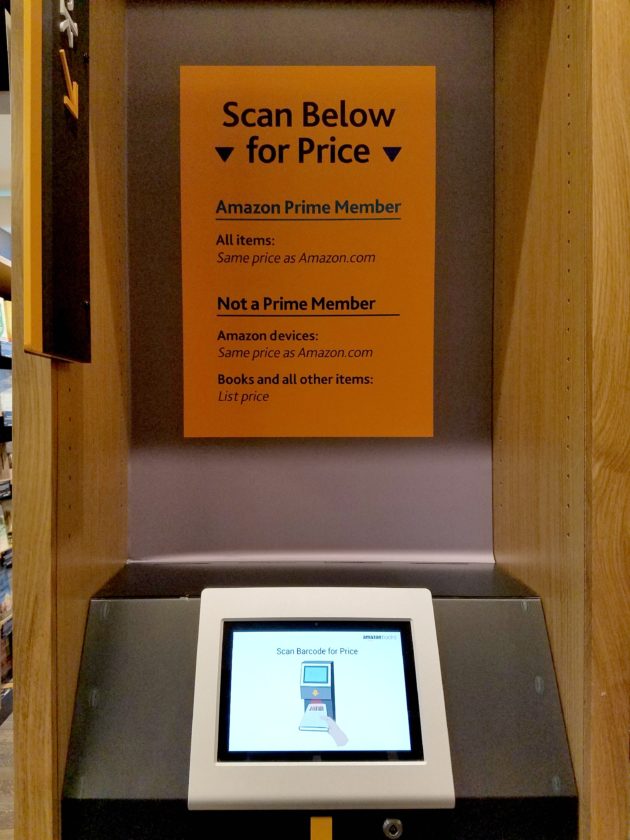 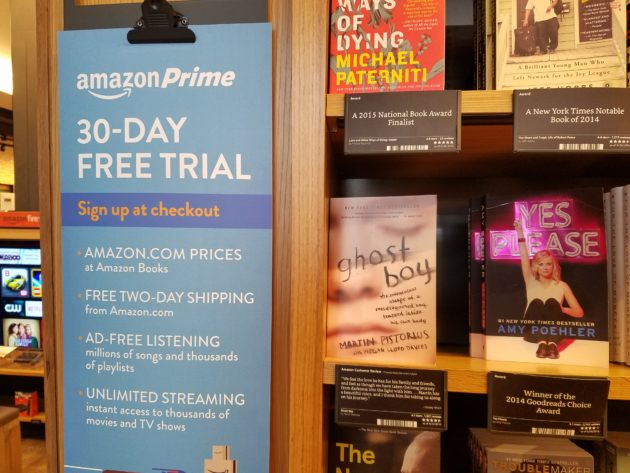 The new bookstore pricing is yet another benefit for Prime members, who already receive free 2-day shipping, music and video streaming, cloud storage, same-day/two-hour delivery in some cities, and more. Since debuting the Prime membership program 11 years ago, Amazon has continuously added more and more perks for members. There are now an estimated 63 million Prime members, making up more than 50 percent of the company’s U.S. customer base.

A recent study from Consumer Intelligence Research Partners estimates that the average Amazon Prime member spends $1,200 per year with the company, compared to about $500 a year on average for Amazon customers who don’t belong to the membership program. Other studies estimate that Prime members are much more likely to make a purchase in the same shopping session compared to non-members.

Earlier this year, Amazon started offering a monthly Prime membership and a streaming-only option in addition to the traditional $99 per year option with its core benefit of free two-day shipping.

At the company’s recent annual meeting, Amazon CEO Jeff Bezos said that the company’s goal is to make Prime benefits so numerous and valuable that it’s irresponsible not to be a member.

Offering a trial to non-members at the bookstore is key. At the annual meeting, Bezos noted that customers who watch Prime Video are more likely to convert from a free trial of Amazon Prime into paid membership, and to renew. Repeating a variation of one of his favorite lines, he said, “We may be the only company to ever successfully convert Golden Globe wins into more shoe and diaper sales.”

Amazon could implement a similar pricing structure at its soon-to-open drive-up grocery stores in Seattle, perhaps offering discounts or even access to Prime members only. Amazon already requires users of its grocery delivery service, AmazonFresh, to also be Prime members.

Rolling out the Prime prices at the grocery stores is not a completely new strategy; companies like Costco require paid memberships, and other grocers like Safeway offer discounts to “club” members. Other bookstores like Barnes & Noble also offer deals for members. But an Amazon Prime membership is unique because it also includes a multitude of other benefits related to the company’s online services.

It was fascinating to watch Amazon open a physical bookstore last year, given that the company put many independent bookstores out of business with its online innovations that launched 20 years ago.

For customers, knowing that you can save as much as 40 percent on your purchase at the bookstore — while also getting the other perks of the $99 per year membership — may very well make it “irresponsible” to not become a Prime member, just like Bezos hopes.