Time will tell if Uber can succeed with its new food delivery operation. After testing it this afternoon, the experience was indeed as easy as hailing an Uber ride, thanks to the company’s robust back-end technology. I do see potential for UberEATS — but only if folks are willing to pay extra to have food show up outside their home or office.

Yes, I’m back on my food delivery service review game. This post isn’t as epic as our massive test back in 2014, but hopefully you get a gist for UberEATS from my experience today.

As GeekWire reported on Tuesday, Uber officially unveiled its full-blown dedicated food delivery app, UberEats, to customers in Seattle today. Uber previously debuted lunch delivery in Seattle back in October — drivers scoot around the city with pre-made meals from a curated lunch menu on weekdays — but today the company unveiled a dedicated UberEATS app with the option to order many more items from around 80 restaurants each day of the week from 10 a.m. to 10 p.m.

I browsed through the app around 11 a.m. this morning. Uber shows you the closest restaurants, with estimated delivery times, and you can look through different menus.

I decided on Martino’s, a “smoked meat and neighborhood eatery” that I had never heard of, but would deliver within 21-to-32 minutes, according to Uber. A quick look on Yelp showed a 4-star rating with good reviews, so I went for it — perhaps some sort of Yelp integration here in the UberEATS app would have been nice. However, I did like the “Most Popular” section, which is where I ultimately found the Santa Maria Tri-Tip Sandwich, priced at $11.50 — same as what the restaurant charges in-house. 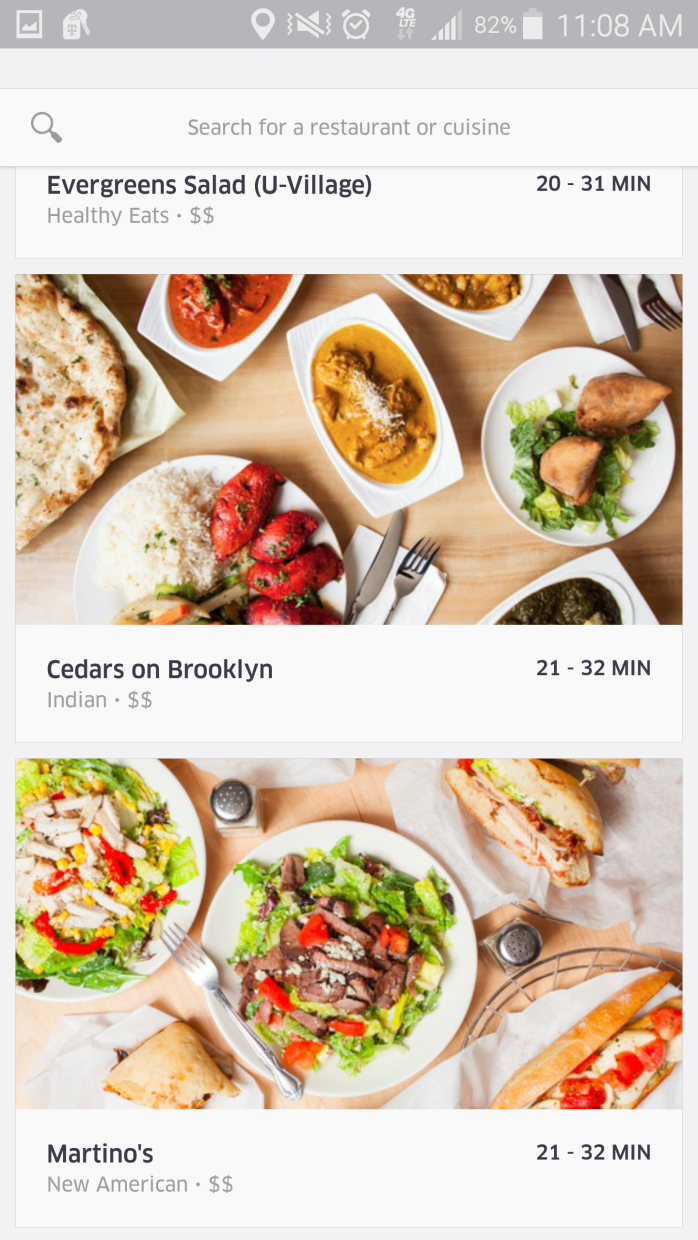 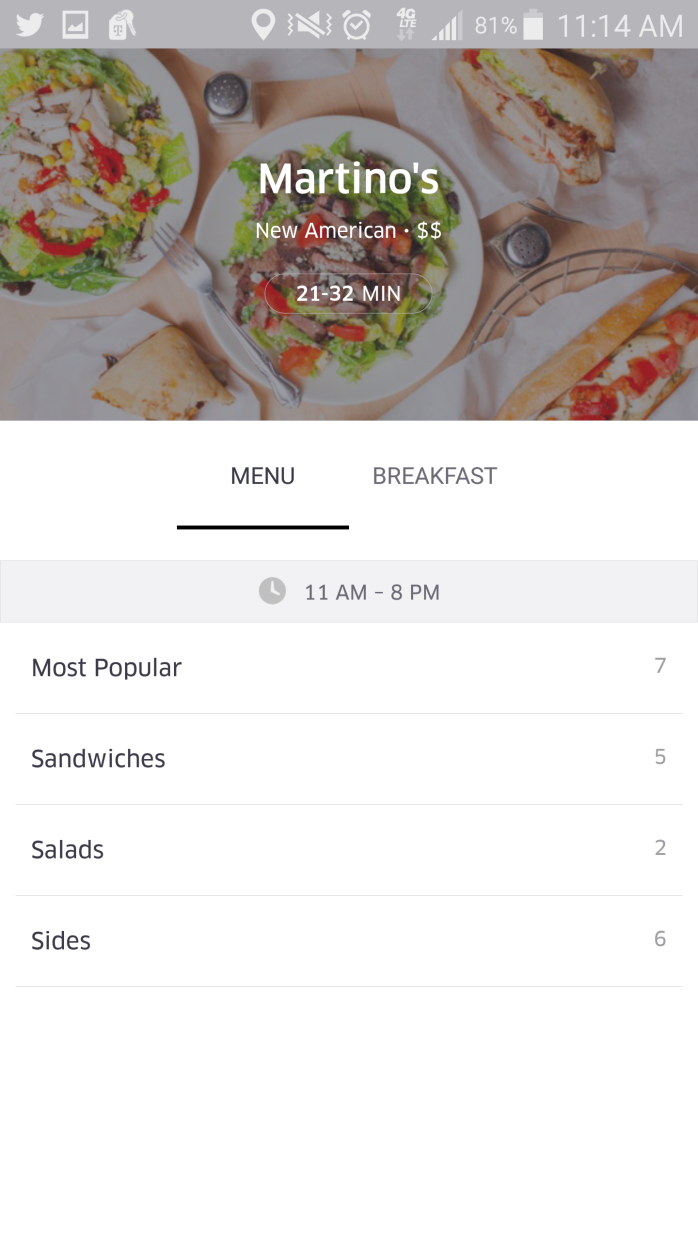 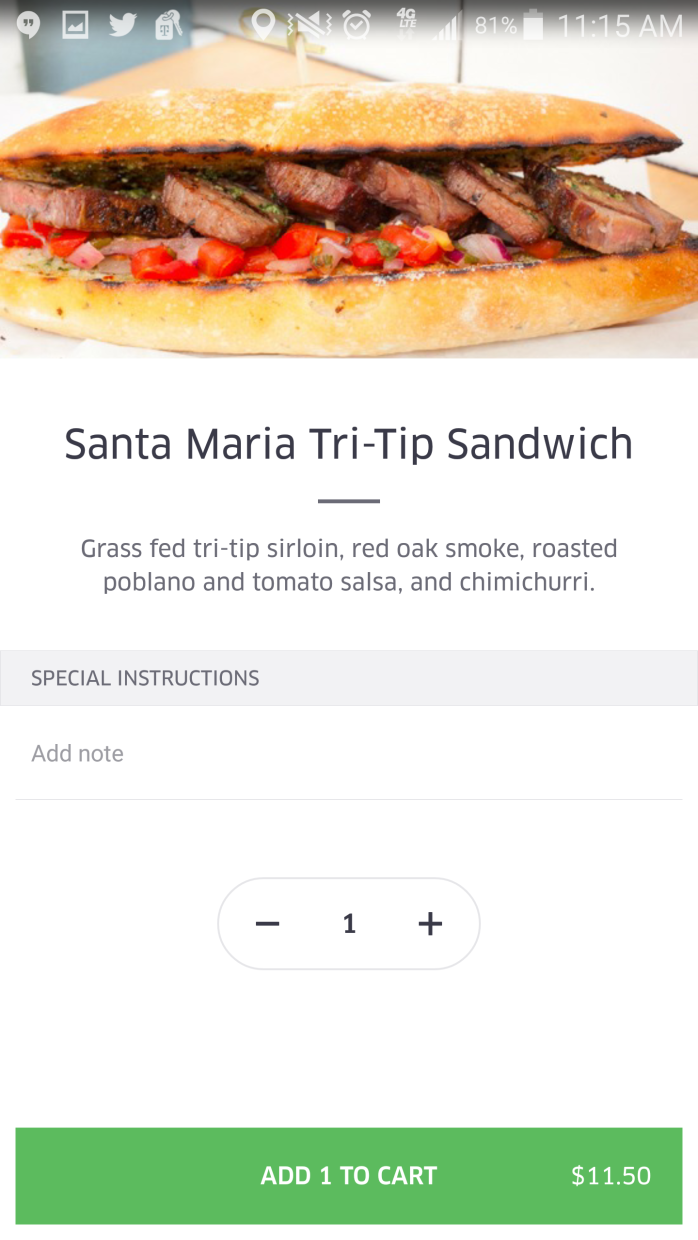 Submitting the order was easy — just three clicks to add an item, check out, and place an order. Uber lets you add special delivery instructions or leave a note for the restaurant to add extra napkins or extra sauce, for example. It also lets you select which credit card to pay with.

After ordering, Uber gave me an estimated delivery time (31 minutes) that would fluctuate depending on the status of the order. You can track when your order is being prepared, when it’s ready, and when a courier picks up the order. From there you can track the driver, similar to how Uber riders already do so in the transportation app. This isn’t anything special, as other food delivery services like Caviar also offer similar mobile tracking features. 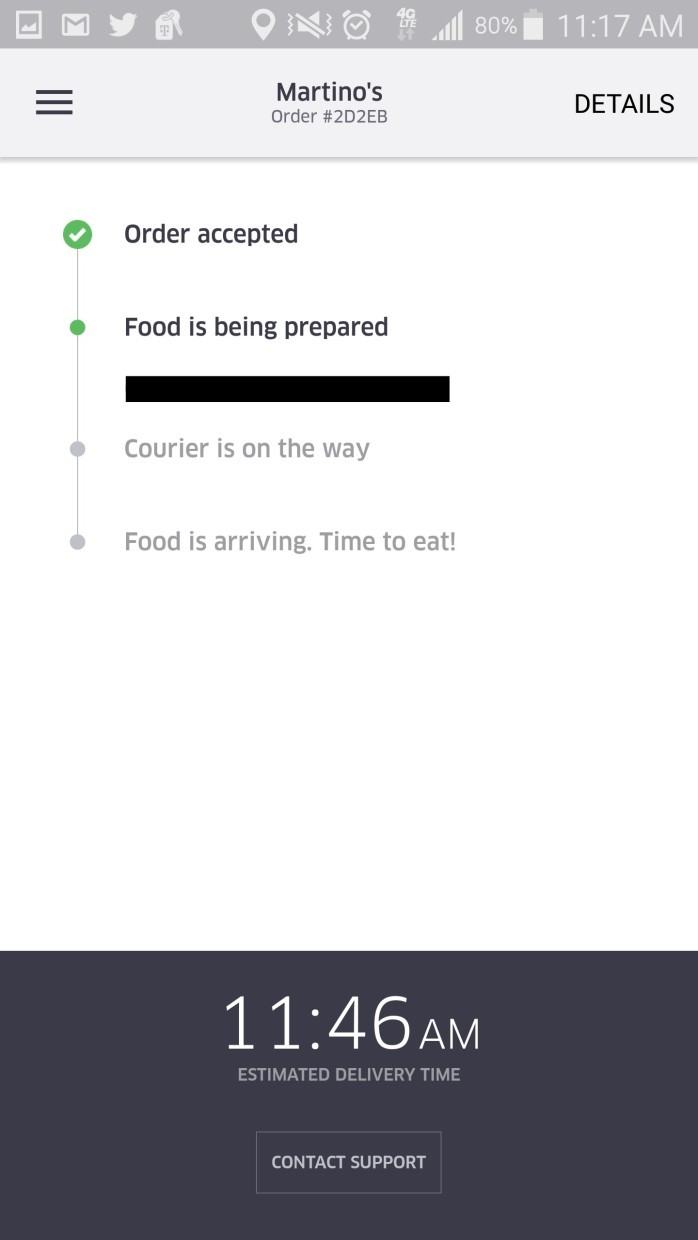 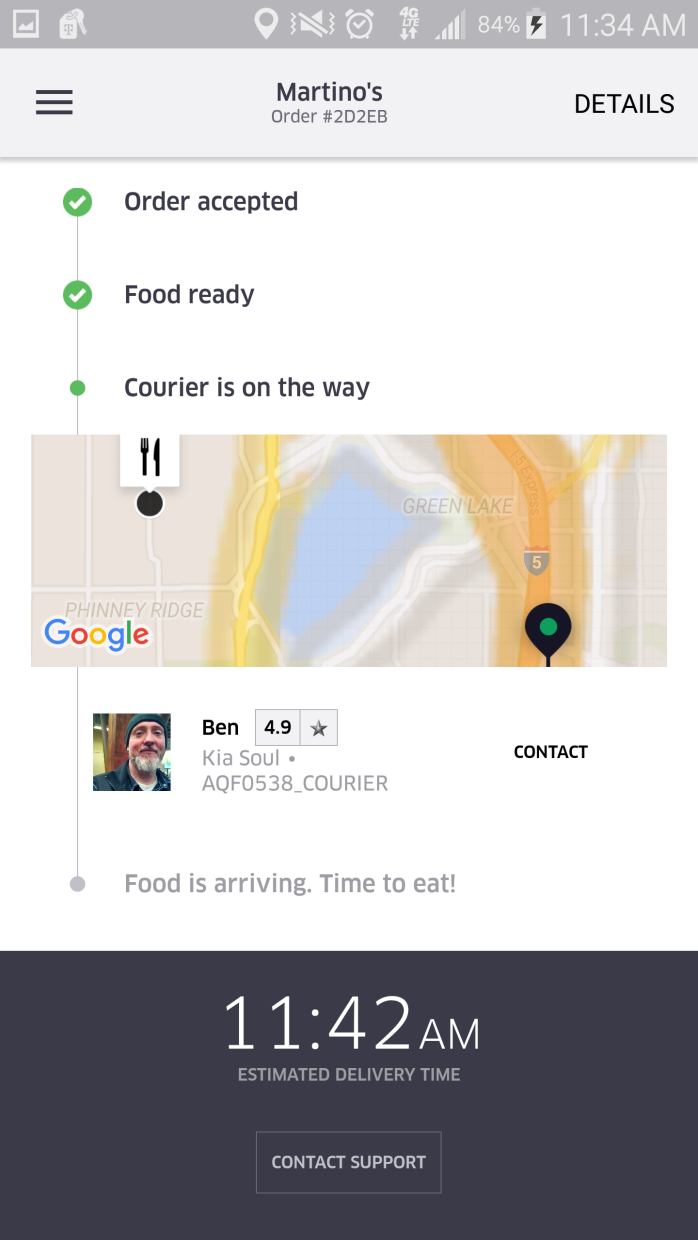 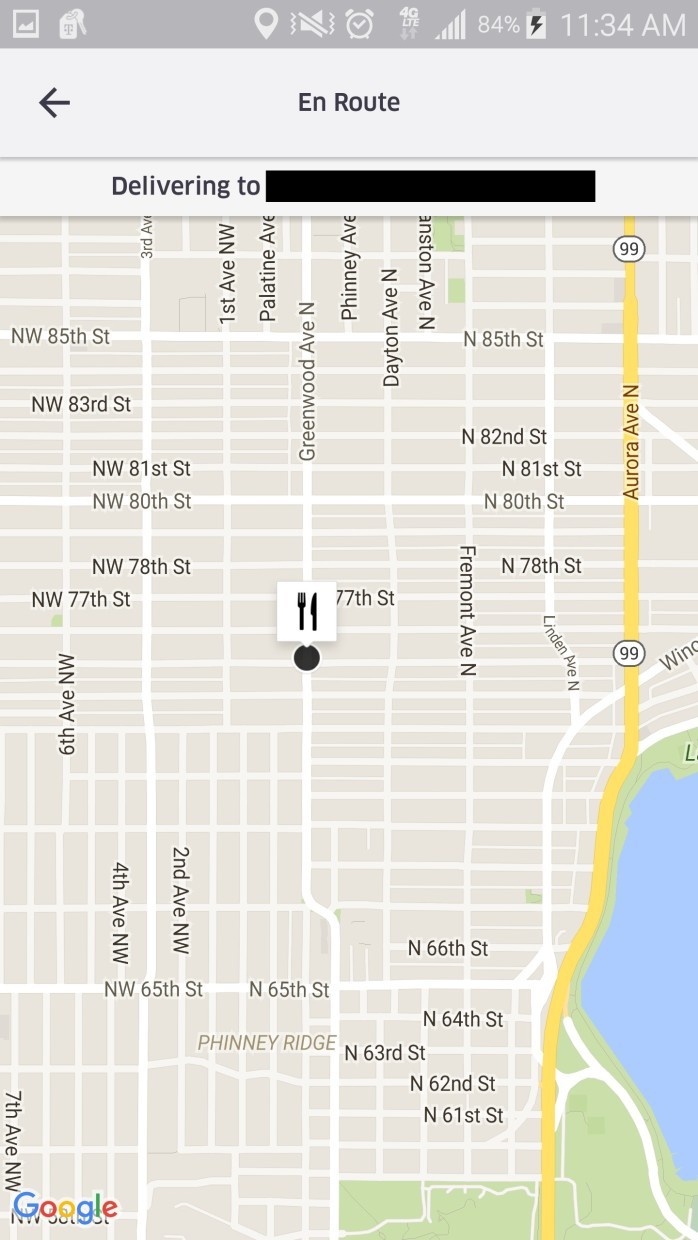 I watched as my driver pulled near my location, just about 31 minutes after I ordered — right on time. There was a bit of confusion as to where exactly my pin dropped, and I could see him stopped nearby. Uber makes it easy to contact your driver, so I called him and explained where I was. Within a few minutes, my driver pulled up, and I walked to his car. He pulled the sandwich from an insulated bag in his passenger seat, and it was time to grub.

Unlike with the UberEats lunch delivery service, which had UberEats stickers, my order came with Martino’s packaging. 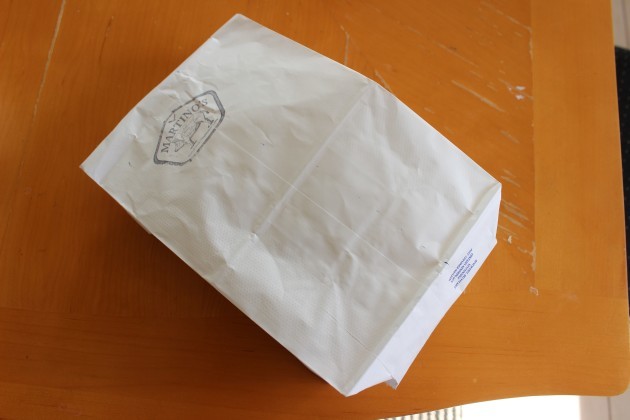 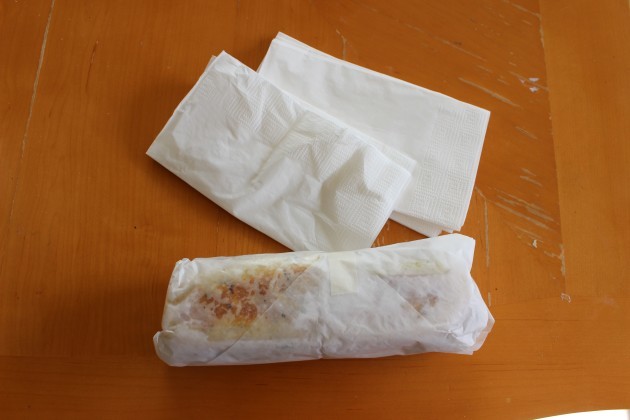 The sandwich itself was still warm. As I opened the wrapper, I could tell the sandwich was ever-so-slightly soggy — but nothing substantial. Everything was still put together nicely, and my mouth watered as I examined the plump grass-fed tri-tip sirloin. 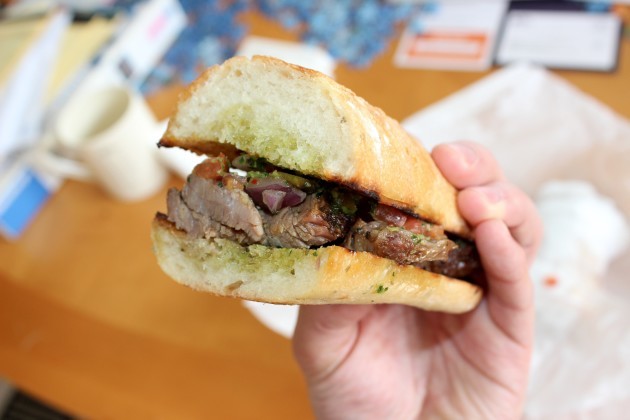 The sandwich was small, simple, yet also super. The meat was tender and had a subtle smokey taste, while the bread was toasted perfectly with a nice chimichurri spread. The fresh tomato salsa was a nice touch. 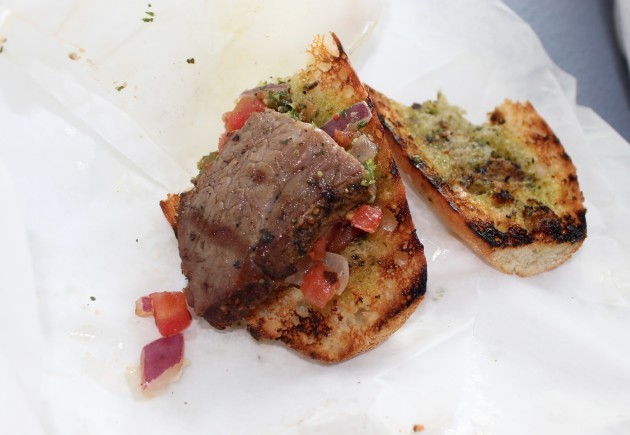 Overall, my experience was smooth and I was pleased with how the food arrived, and tasted — quality is a big focus for UberEATS, so no real surprise there. However, there wasn’t a way to rate either the driver or the food within the UberEATS app — like you can do with drivers on the normal transportation app — which is something that could be useful. I also wanted to order more food from a separate restaurant, but Uber doesn’t let you make two orders at once.

The final cost, with tax, was $12.60. Uber is temporarily waiving the delivery fee, which should be around $4.99 for each order — and that’s where I’m hesitant about UberEATS.

Yes, the ordering and delivery experience was smooth, if not better than, than the other services I’ve tried. The food was great. But am I willing to pay upwards of $18 for that sandwich? Probably not.

Granted, it was nice that I could spend one minute ordering my meal, get back to work for another 30 minutes, and have the food show up. I certainly saved time and gas by not driving over to the restaurant. This has always been a benefit of delivered food.

But when it comes down to it, I’d only use something like UberEATS as often as I order delivery pizza — which is sparingly. I’m fortunate to own a vehicle and live relatively close to a number of solid eateries, so that helps. Yet even if I didn’t, it would be hard to justify paying so much for relatively small amounts of food.

The cost, combined with the flurry of food delivery competitors in Seattle — DoorDash, Peach, Lish, Munchery, Square-owned Caviar, Postmates, Bitesquad, Seamless, Gobble, GrubHub, Farmigo, Yelp-owned Eat 24, and many others — might make it difficult for Uber’s restaurant delivery service to do exceptionally well.

The competition is absolutely heated, and some aren’t finding success. Just last week,TechCrunch reported that SpoonRocket shut down after failing to raise more investment — it closed shop in Seattle last year after operating for just four months — while India ride-hailing giant Ola closed its own food delivery services earlier this month just one year after launching them.

Given that the delivery fee stays at around $4.99 no matter how many meals you order, I can see the appeal of this model for an office ordering lunch, for example. It’s why startups like Peach, which only delivers lunch to offices around Seattle, have found success.

Again, though, $18 is too much. I can have two Jimmy John’s sandwiches delivered to my house, including tax, delivery fees, and tip — Uber doesn’t offer an option to tip in the UberEATS app, by the way — for the same price. Yes, sandwich snobs, Jimmy John’s ain’t serving tender tri-tip sirloin. But I’ll sacrifice my taste buds for my wallet on this one.