The NFL draft begins today, an annual tradition where football teams look to identify and obtain the most impressive talent on the gridiron.

Our latest category in the GeekWire Awards is no different, just with a high-tech twist. Today, we’re excited to present voting in Hire of the Year, which recognizes some of the key hires that will accelerate companies and organizations, pushing them to new heights and possibly altering the landscape as we know it. 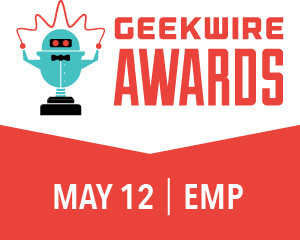 Over the past two weeks, we’ve been opening voting in select GeekWire Awards categories, with GeekWire readers choosing their top picks from finalists selected by our panel of judges from community nominations. Check back on GeekWire each day to cast your ballots, or visit here to vote in announced categories such as Next Tech Titan, Startup of the Year and Geekiest Office Space. All of the winners will be revealed at the GeekWire Awards — presented by Wave — on May 12 at EMP.

Tickets are available for the GeekWire Awards, but they are going fast and this event sells out every year as we celebrate the best of the Pacific Northwest tech community. Make sure to get your tickets here.

Hire of the Year is presented by Indeed. Cast your ballot below and continue reading for more details on each finalist.

Ana Mari Cauce, University of Washington: It is not everyday that the largest research institution in the state taps a new president, but the University of Washington appears to have picked a winner in Ana Mari Cauce, who is largely adored by faculty, students and community leaders. Cauce, who has been on the faculty at the UW since 1986 and becomes the first permanent female president, has pledged to push the UW even further into areas that are critical to the technology community: computer science, entrepreneurship, research. “We have a booming culture of entrepreneurship,” Cauce said at an event in Seattle last month. The UW was recently ranked No. 4 in a Reuters ranking of the world’s most innovative universities, and under Cauce that ranking could go even higher.

Mike Fridgen, Madrona Venture Labs: This startup veteran has been around the entrepreneurship block a few times, and in most of those instances the projects were somehow tied to Madrona. So, it was not a big surprise when Fridgen — who previously played key early roles in Madrona-backed companies such as Farecast, Decide.com and TripHub — landed at the Seattle venture capital firm. Fridgen is leading Madrona Venture Labs, an ambitious project to incubate new entrepreneurial ventures. “I am passionate about early-stage (startups) and there is such an incredible team here at Madrona Labs that it all came together very naturally,” said Fridgen when he took on the new role last November.

Kevin Goldsmith, Avvo: Goldsmith has some serious technology chops, previously leading 130 engineers as vice president of engineering at music service Spotify. Now, the Carnegie Mellon University math and computer science grad and former Adobe engineer, who is relocating from Sweden to Seattle, is turning his attention to lawyers. Avvo hired Goldsmith as its new CTO, a major coup for the heavily-funded Seattle company that’s making it easier to match consumers with lawyers. “I’m looking forward to helping grow the development organization and support the mission of making legal support available to everyone,” said Goldsmith at the time of his hiring last month.

Nicole Robinson, Fred Hutchinson Cancer Research Center: The Fred Hutchinson Cancer Research Center is making a big push to get its cutting-edge research into the hands — or should we say bodies — of patients who are suffering from debilitating diseases. Leading the charge in these commercialization efforts is Nicole Robinson, who was hired last June to boost the number of startups coming out of the prestigious Seattle-based research institution. Described by colleagues as “amazing,” Robinson joined the Fred Hutch from Cincinnati Children’s Hospital Medical Center where she served as Assistant Vice President of the Center for Technology Commercialization. “I’m thrilled to be joining the Hutch and to help accelerate the early stage discoveries that we’re making that can lead to the next breakthrough and change the outcome for the patient,” said Robinson at the time of her hiring last summer.

Krish Srinivasan, Remitly: Microsoft. Amazon.com. Lyft. Krish Srinivasan has played key roles in some very big companies, helping to shape some leading technologies. Now, he’s turning his talents to one of the Seattle’s fast-growing startups: Remitly. As CFO, Srinivasan will have his hands full, especially since the Seattle money transfer startup just this week announced a whopping $38.5 million venture round. “Remitly is at the forefront of changing how money is transferred internationally, and the company’s mission to dramatically improve the cost, transparency and ease with which customers are able to do this is very near and dear to me,” Srinivasan said in a news release at the time of his hiring in February. “The team’s execution, in driving adoption and scale, has been impeccable, and I’m excited to help drive even more growth in the coming months and years.”

Best of luck to all Hire of the Year finalists. And don’t forget, tickets are still on sale for the Awards, but they are going fast and we do expect the event to sell out this year.