The University of Washington today named Ana Mari Cauce as its new president.

Cauce, formerly a UW provost, was named interim president in March after former president Michael Young left for Texas A&M earlier this year. She has been part of the UW faculty since 1986. Cauce is the first permanent female UW president.

“This really is about us and about where we are going together,” Cauce told the Board of Regents as more than 100 faculty, students, and administrators gathered in the Petersen Room in Allen Library. “It means so much more to me that I’m not some place with a bunch of strangers. … It could not be more meaningful and I could not feel more privileged and humbled.”

A native of Cuba who grew up in Miami, Cauce received her Ph.D. in psychology from Yale University, and has served as the UW’s chief academic officer for the past three years.

The UW, which has had six presidents since 1995, interviewed more than 100 educational leaders to replace Young, who was known for promoting commercialization, giving technologies developed inside the university a life off campus, and encouraging a more entrepreneurial mindset on campus. Seattle-area technology leader have said they don’t expect Young’s departure to slow those efforts.

Young took office at the UW in July 2011, and was named a GeekWire Newsmaker of the Year in 2012. The 65-year-old made commercialization of startup ideas a priority at the UW after arriving from the University of Utah, where Young spurred a massive overhaul of the tech transfer department in Salt Lake City. 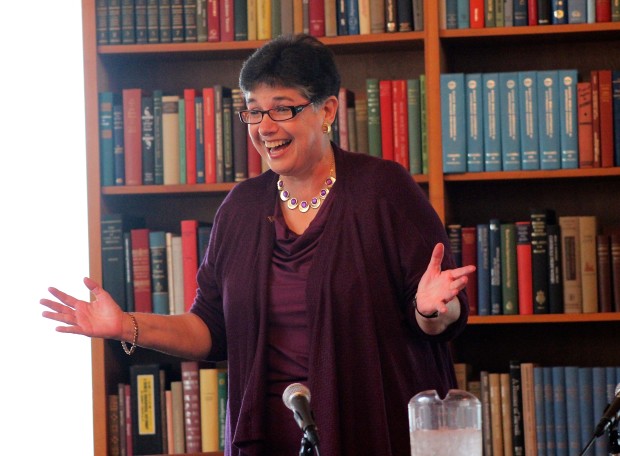 Cauce said she’ll continue helping push forward research and innovation efforts at the UW, which was recently ranked No. 4 in a Reuters ranking of the world’s most innovative universities. At the same time, she’s focused on what she calls the university’s “public mission, our access mission.”

When asked how long she plans to stay at the UW, particularly given the turnover at her new position in the past two decades, Cauce said “she’s not going anywhere.”

“I plan to retire in this state and this city, no question,” she said. ” … My commitment to this university runs deep.”

Ed Lazowska, the longtime UW computer science professor who holds the Bill & Melinda Gates Chair in Computer Science & Engineering, said he’s thrilled with Cauce taking over as president. He noted her “huge support” for computer science, data science, and entrepreneurship, adding that she was responsible for recruiting Vikram Jandhyala to the new position of Vice Provost for Innovation.

Most importantly, Lazowska said, Cauce is “one of us.”

“She has risen through the ranks on her very considerable merits, and she is committed to UW,” Lazowska told GeekWire. “Lord knows, we’ve had more than enough of the revolving door in recent years – some who were shoved through it, and some who walked through it of their own volition when offered more money. There’s another important positive of being one of us: she knows who to trust and who to ignore. When a new leader arrives from the outside, there’s a lot of jockeying for position. There would be none of that with Ana Mari: she knows us all.”

Jandhyala, also the executive director of the UW’s innovation hub called CoMotion, added that “it would have been a surprise if they had not chosen such an amazing leader.”