Microsoft told GeekWire in August that having NFL players and coaches use the company’s Surface tablet on the sideline during games to review past plays is “the greatest technology integration in sports.”

The New England Patriots head coach on Tuesday blasted the devices, telling reporters that he’s “done with the tablets.”

Belichick ripped Microsoft’s product, saying that “they’re just too undependable for me” and noting that he’s going back to the traditional printed black-and-white photos.

“I’ve given them as much time as I can give them,” he said. “They’re just too undependable for me. I’m going to stick with pictures as several of our other coaches do as well because there just isn’t enough consistency in the performance of the tablets, so I just can’t take it anymore.”

NESN reporter Zack Cox transcribed Belichick’s five-minute and 25-second rant on why he’s so frustrated with the tablets.

Here's Belichick's full answer as to why he hates the tablets. Lasted five minutes and 25 seconds. pic.twitter.com/wcSqebtQRu

Belichick was responding to a question that noted how the Patriots reportedly had issues with their communications equipment during the team’s 35-17 win over Cincinnati this past Sunday. On Tuesday, he said “there are very few games where there aren’t issues in some form or fashion with that equipment” and complained that teams can only test the equipment just hours before kickoff.

Belichick said “those fail on a regular basis,” in regard to the technology that powers how coaches communicate with each other, and with players, during games. His critique of how the NFL handles the communication technology is noteworthy.

“Overall there is a lot of complexity to the technology,” Belichick said on Tuesday. “There is complexity to multiple systems and there are a lot of failures, and so I know on our end [Patriots IT Specialist Dan Famosi] does a great job to fix those as quickly as possible. He has very limited access. I don’t know how much urgency there is on the other part from the league standpoint. However much urgency there is for them to have everything right, I don’t know, I’m not involved with that. But yeah, it was a problem last week. It’s basically a problem every week. The degrees aren’t always the same but we’re usually dealing with something.”

Belichick, who is not exactly a geek, noted how the NFL has been testing video on the tablets during the preseason — a feature that would certainly be a game-changer in terms of being able to watch past plays during games — but said for now, he’s done using them.

“I’ll use the paper pictures from here on because I’ve given it my best shot,” he said. “I’ve tried to work through the process but it just doesn’t work for me and that’s because there’s no consistency to it.”

You can listen to Belichick’s comments starting at the 12:30 mark here, or read them here. It’s not clear what specific issues he was having with the tablet itself, but his comments aren’t too surprising given what he did a few weeks ago during a game:

“We respect Coach Belichick’s decision, but stand behind the reliability of Surface. We continue to receive positive feedback on having Surface devices on the sidelines from coaches, players and team personnel across the league. In the instances where sideline issues are reported in NFL games, we work closely with the NFL to quickly address and resolve.”

“Microsoft is an integral, strategic partner of the NFL and implementing their technology on our sidelines has increased the efficiency and speed of collaboration between coaches and players to an all-time high. Within our complex environment, many factors can affect the performance of a particular technology either related to or outside of our partner’s solutions. We continue to work with all of our partners to ensure the best systems are in place to most effectively assist the clubs in the execution of their game plan.”

About three years into Microsoft’s 5-year, $400 million deal with the NFL it signed in 2013, the company has indicated that it is pleased with what’s transpired. The tech giant highlighted the Surface integration — part of several NFL-related projects from Microsoft — in a Microsoft News Center story earlier this month, quoting coaches who praised the device.

“I can’t really think of another piece of technology that professional athletes are using to actually hone their craft in the game, that is a better example than the Surface,” Jeff Tran, Microsoft’s Director of Sports Marketing and Alliances, told GeekWire in August.

But Belichick’s comments and decision to stop using the Surface is a big blow for Microsoft, especially given what the company’s marketing execs recently told GeekWire.

“To have people like Drew Brees or other players say ‘wow, this really changes the way we play the game on the sidelines’ — that is without a doubt a big success,” Microsoft Chief of Marketing Chris Capossela said in Atlanta last month. 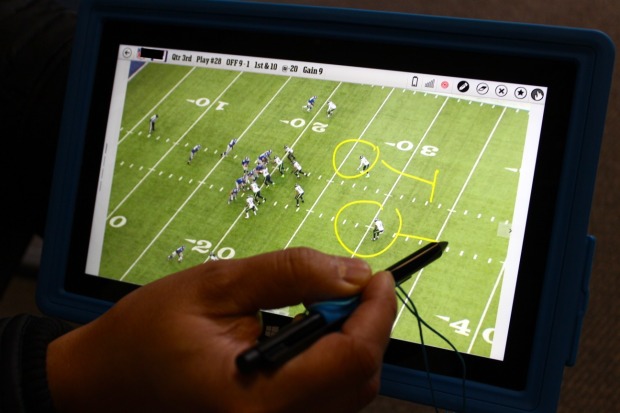 It’s also another PR headache for Microsoft, which endured several other Surface-related marketing problems during the past two NFL seasons.

In 2014, commentators referred to the Surface as an “iPad-like tool.” One month later, Bears quarterback Jay Cutler called the devices “knockoff iPads.” The following year during the 2015 season opener, Al Michaels mistakenly called the Surface an “iPad” on national television.

However, Yusuf Mehdi, Corporate Vice President, Windows and Devices Group at Microsoft, told GeekWire that those hiccups may have actually been a blessing in disguise.

“I actually think it has been beneficial,” Mehdi said. “The whole controversy of, ‘oh wait, it’s not one of those other devices, it’s a Surface?’ People wondered what the controversy was, and realized there was a Windows device on the sidelines. In a way, it’s almost better than if it had just been smooth.”

Will it be the same “beneficial” effects with the recent comments from Belichick, a six-time Super Bowl champion and three-time AP NFL Coach of the Year? Hard to tell.

This is the third year of Surface integration on the sidelines, and if you watch an NFL game on TV or in person, you’ll notice players and coaches huddled around the tablets during breaks. Over the past three years, it seems as if the tablet is being used more and more, all but replacing the black-and-white printouts.

However, some still like the traditional format. For example, while reporting about the technology at Levi’s Stadium last month, I noticed a San Francisco 49ers coach who was using a combination of the paper printouts and the tablet: 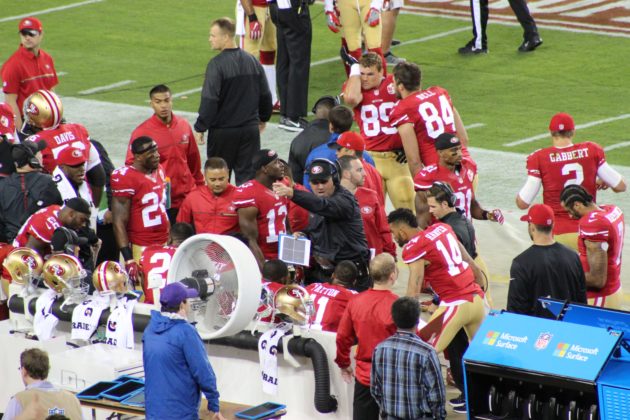 Microsoft has made a big push into the sports world over the past several years, an effort spearheaded by the NFL deal. It has similar sponsorship/technology integration deals with the PGA Tour, NASCAR, Real Madrid, and many other organizations.