Just a few days after the Redmond giant debuts its newest operating system with Windows 10, Microsoft will be front-and-center in the professional racing world as it sponsors its first-ever NASCAR race in Pennsylvania on Sunday with the “Windows 10 400.”

Last month, Microsoft became the official technology partner of NASCAR, which has adopted the Windows 10 platform and Azure cloud services. The two sides have worked together since last year, when NASCAR started using Microsoft technology to speed up the car inspection process prior to races.

“With Windows 10, NASCAR can run one code base for apps across all types of devices and race operations,” Korst noted. “This gives officials and NASCAR operations the freedom to move around the track to make better decisions, versus being locked down in a hauler inside, or outside, the track. In the future, our partnership will let NASCAR bring this data to its fans quicker — be it on jumbo screens at the track, on TV or on fans’ mobile devices.

“The team will be able to capture and analyze terabytes of data and run simulations in Azure to make better decisions on tire wear, fuel consumption and chassis/car setups,” added Korst. “And building Windows 10 universal apps will let the crew chief and engineers be more mobile at the track and stay connected with engineers back at the race team’s shop to make real-time decisions.”

At Pocono on Sunday, Earnhardt Jr. will be racing his No. 88 car with “Windows 10” painted on the hood and back, along with “Microsoft” on the side at Pocono on Sunday. He first sported the Microsoft logos on June 28 at Sonoma Raceway. 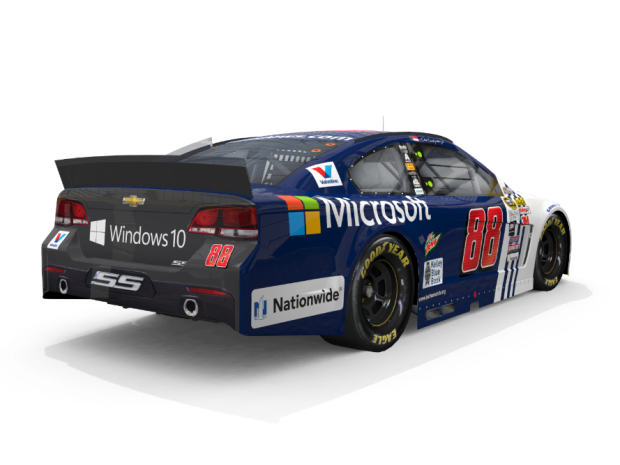 At Pocono this weekend, a “Fan Fair” and paddock areas will feature Windows 10 devices and interactive exhibits for attendees to try out.

While not so popular in the Northwest, NASCAR is huge elsewhere in the U.S., although viewership numbers seem to be decreasing over the past few years. NASCAR noted that 25 percent of Fortune 500 companies have a NASCAR-related sponsorship, while there was a 50 percent increase from 2013 to 2014 with the number of participating technology companies.

Microsoft has a number of other similar sports-related partnerships with leagues and teams. The company became the “official sideline technology partner” of the NFL after inking a huge $400 million, five-year contract with the league in 2013. And earlier this year, Microsoft signed a four-year deal with Real Madrid, the world’s most popular and most valuable sports franchise ($3.4 billion), to help the club transform how it connects with fans and runs its business operations.