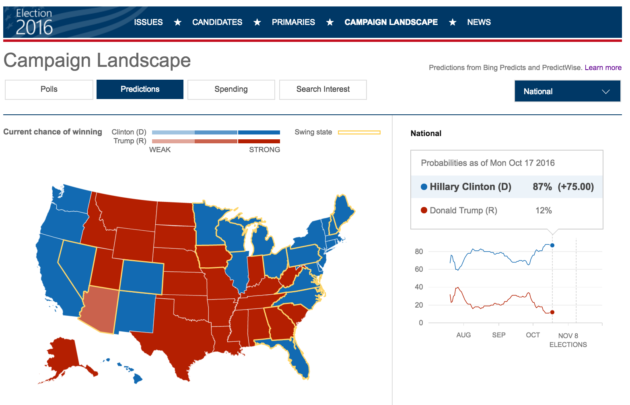 Microsoft Bing is out with its election predictions again this year with a few new features that detail campaign spending by state and search interest by demographic.

Bing’s election portal has expanded since debuting back in 2012, namely with its real-time data-driven predictions that use information from both Bing Predicts and PredictWise, the site founded by Microsoft Research economist David Rothschild.

As of Tuesday morning, Bing predicts an 87 percent chance of Hillary Clinton defeating Donald Trump in the presidential election. Rothschild’s PredictWise site, meanwhile, projects a 91 percent chance of Clinton winning this November. Rothschild will be speaking today at Seattle Interactive Conference — stay tuned for our report from there.

This year, Bing rolled out a “campaign landscape view” geared specifically toward the 2016 election. The search engine lets users break down predictions, polling data, and campaign spending/fundraising on a state-by-state level. It will soon add forecasts for each congressional race.

There is also a tab that shows the most-searched candidates based on each state in relation to age and gender. 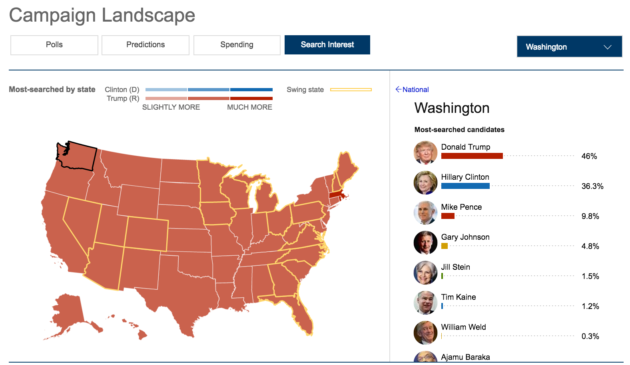 Bing’s other election-related offerings include news and articles that surface underneath the election hub and the ability to live-stream debates from within the search engine’s portal. For tomorrow’s debate, search “presidential debate” on Bing and it will direct you to the live stream.

For the past several years, Microsoft has added prediction features and interactive data to Bing — whether it be for elections or sports or entertainment — as a way to draw more people to its search engine. It even turned Bing into a streaming TV guide of sorts for this year’s Summer Olympics. Bing leaders told GeekWire in August that it wants Bing to be a hub during “cultural moments.”

“When there is a passionate time during the year when a lot of people take to search, Bing wants to be able to use our search engine to deliver something different and new that can expand upon the inquiry you might have,” said Bing Product Marketing Manager Steve Kane.

Bing has quietly turned into a revenue-making machine for Microsoft despite Google’s grip on the search engine market. Google, meanwhile, has its own election portal this year that utilizes its Google Trends data.