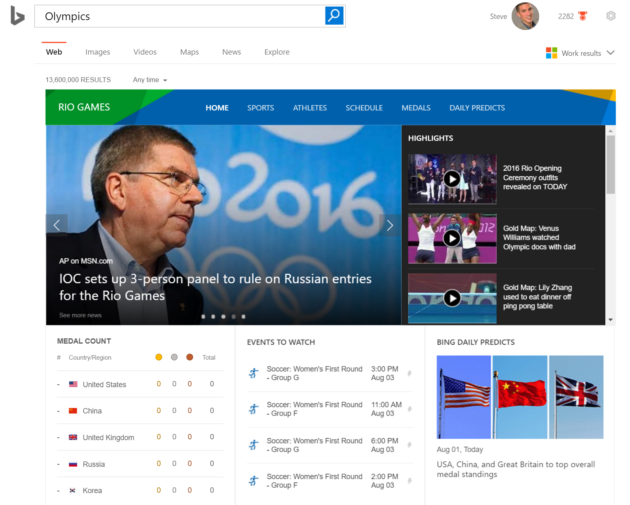 Microsoft is turning its search engine into a TV and streaming guide for the Summer Olympics.

Bing today revealed details about its plans for the massive sporting event that kicks off with Friday’s Opening Ceremony.

For the past several years, Bing has turned into a pseudo-fortune teller, using analytics and big data to predict the outcome of everything from the NFL playoffs to the Oscars. Bing will do the same for this month’s Olympics, predicting which athletes will take home medals; it will also make it easy for users to find information related to athletes and medal counts as with past Olympic games. 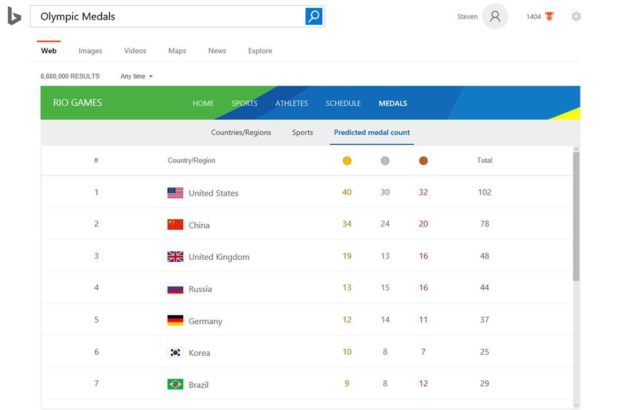 But much of Bing’s focus this time around is on an expanded TV guide of sorts, helping people figure out what to watch — both now and in the future — based on projected upsets, new world records, exciting finishes, and the home country of a user. The algorithm powering the “Events to Watch” recommendation engine analyzes what sport is popular for a given country, based on what people are searching for and a country’s past Summer Games success. Microsoft is essentially applying the same technology used for Bing Predicts, but for the TV/streaming guide.

With so many Olympic competitions going on at the same time, the idea is to help people prioritize what they should watch. The Bing team spent three weeks talking to Olympic fans about the biggest pain points they have with watching the games — one of the most common complaints was related to what and when to watch, especially given different time zones and the plethora of events.

“We wanted to take our experience this year to a different level,” Bing Product Marketing Manager Steve Kane told GeekWire. 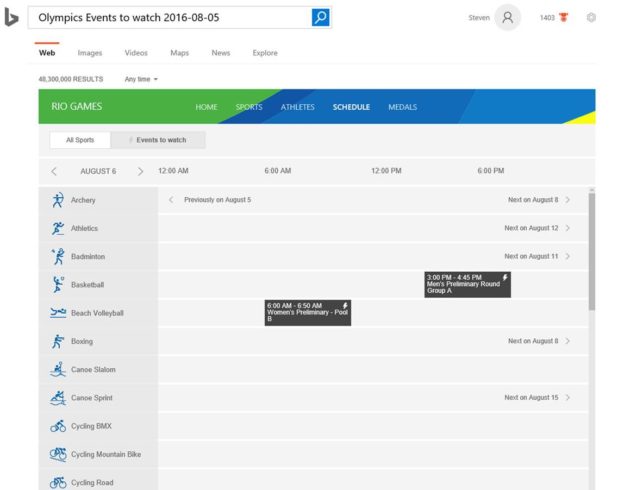 Along with the recommendation engine, the “Events to Watch” feature also lets you filter by sport and provides a link to NBC’s live-streaming coverage for any live competition going on at the time. On a related note, Microsoft is also working with NBC again for this year’s Olympics to provide its Azure platform for live-streaming services — read more about that partnership here.

Kane explained that Bing, which has quietly turned into a revenue-making machine for Microsoft despite Google’s grip on the search engine market, wants to be a hub during “cultural moments” like the Olympics and other high-interest events. For example, along with predictions and TV/streaming information, Bing is also surfacing interesting news stories for people using Bing during the Olympic games. Microsoft is certainly not the only company thinking this way — Google today also unveiled new features to help people follow the Summer Olympics this month.

“When there is a passionate time during the year when a lot of people take to search, Bing wants to be able to use our search engine to deliver something different and new that can expand upon the inquiry you might have,” Kane said. 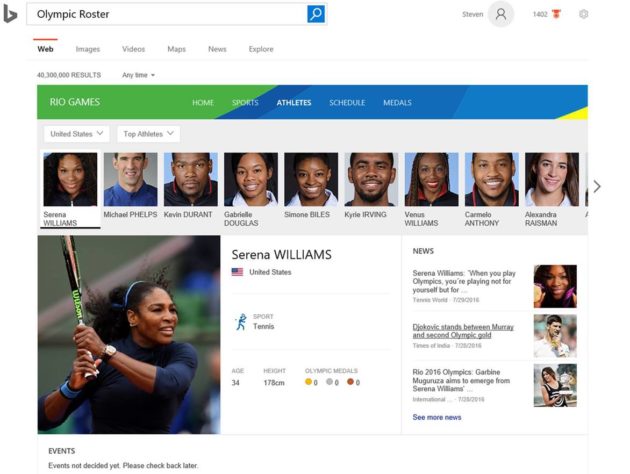 He noted that developing something like “Events to Watch” and providing predictions is ultimately a way to increase user engagement with Bing.

“In that sense, it does contribute to the success of Bing becoming a real legitimate search engine,” Kane added. “Bing is now an engine that Microsoft looks at to be this way to make money and keep thinking creatively based on what users might want.”

Bing, the default search engine for Microsoft’s Edge browser and for Cortana, the company’s virtual assistant, can also appeal to enterprise customers. Walter Sun, Principal Applied Science Manager at Bing, told GeekWire that there are also applications for something like Bing Predicts beyond sports or movies or politics.

“At Microsoft, we believe that information is powerful,” Sun said. “Companies can use something like Bing Predicts to get a view on what customers are doing in aggregate, which can help inform decisions related to sales and advertising.”