With an expanded Guide to the Academy Awards, Bing is offering film fans a range of insight and tools dedicated to making the most out of Hollywood’s biggest night. Because we’re all about the winners over here, we’re particularly interested in who Microsoft’s search engine will expect speeches from this Sunday.

Leonardo DiCaprio may want to sit down for this. The four-time Oscar loser is finally predicted to take home a golden statue for his role in “The Revenant.” With a 73 percent chance to win as of Wednesday, DiCaprio was easily outpacing fellow best actor nominees Bryan Cranston, “Trumbo,” (5 percent); Michael Fassbender, “Steve Jobs,” (6 percent); Eddie Redmayne, “The Danish Girl,” (7 percent); and Matt Damon, “The Martian,” (9 percent).

Looks like DiCaprio managed to outrun Redmayne on the red carpet after all.

“The Academy Awards are the biggest showcase of the year. It’s when a lot of different things come together: movies, celebrities and the news cycle,” Matthew Quinlan, director of product marketing for Bing, told Microsoft News. “This experience helps feed the passion of people who love entertainment. … We find that people want to stay in the flow once they’re getting immersed in the Academy Awards. They don’t want to dive around to different websites and piece it all together. We wanted to put that all together.”

We find that people want to stay in the flow once they’re getting immersed in the Academy Awards. We wanted to put that all together.

The predictions are equally strong that DiCaprio’s film will take the best picture prize. “The Revenant” was pulling 37 percent of the social, search, and other relevant data that Bing uses to predict a frontrunner. “Spotlight” (26 percent) and “The Big Short” (19 percent) were the next closest films among the field of eight nominees.

Poke around and see who Bing likes in the best actress category as well as the supporting roles, best director and more. There’s also an Oscars quiz and a look back at red carpet highlights.

Earlier this week, Bing also rolled out its CelebsLike.Me tool to determine which Oscar nominee users most resemble. After uploading a photo, I got a 52 percent match with Mexican actor Demian Bichir. He was nominated for a best actor Academy Award in 2012 for “A Better Life” and he just got cast in “Alien: Covenant,” so that’s cool. Bing says the matches “are based on facial structure — think jawline, eye spacing and nose shape — and not things such as hair length or color.”

I think our unshaven faces had something to do with triggering Bing’s secret beard algorithm. Check out who else I got matched up with, including that guy from “The West Wing,” and try your own mug. 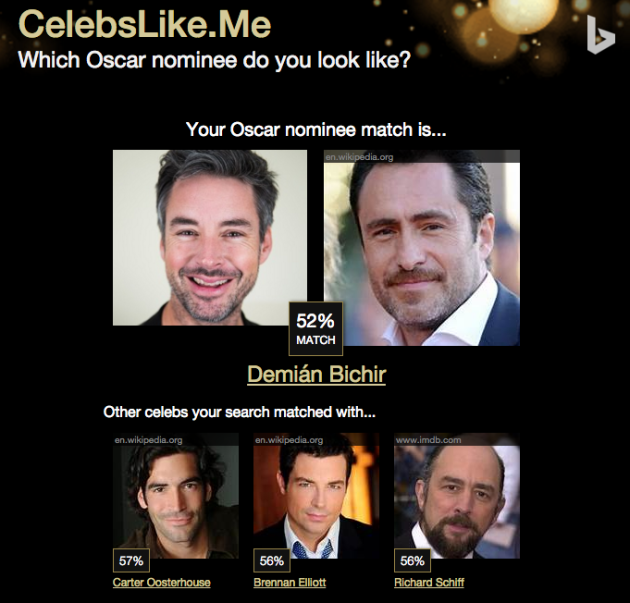