Amazon’s Kindle Oasis is a premium device. Its screen is stunning, the construction is solid, and it may be the most comfortable reading device I’ve ever used.

But it’s also a little strange. Amazon opted for an asymmetric design with all the buttons on one side of the device. It includes a battery cover with your purchase to extend reading time for the slim blade of a device. It’s even got a lump on one side to make the screen as thin as possible.

But Amazon could have gone further with the weirdness to make this an even better choice for readers. 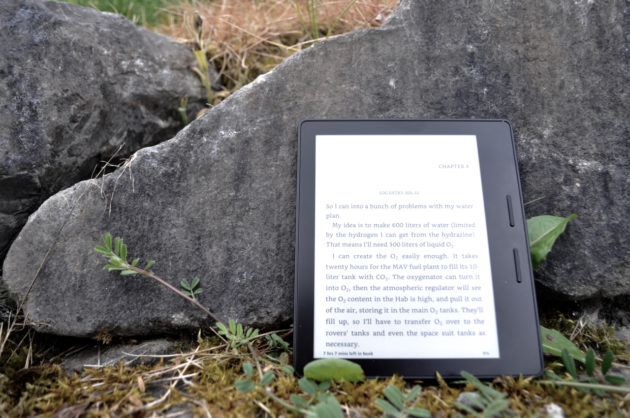 Amazon knows how to make cheap hardware. The $50 Fire tablet is a good example of Amazon choosing just the right components to make a budget device feel great. But when Amazon goes all out, the company is capable of true greatness.

The screen on the $290 Kindle Oasis may look familiar. It’s the same 300ppi resolution as the current Kindle Paperwhite and Voyage, and it’s even the same size, although it looks different thanks to the super-thin bezel along three sides.

But the screen stands out from its predecessors thanks to a new lighting system. Just like other premium Kindles, the Oasis has a front-lit display that helps the e-ink screen maintain readability in the dark. But the Oasis screen has 60 percent more LEDs providing that light than previous models, giving off a more even glow. The lights are along the side instead of the bottom, as well, so the light doesn’t have as far to go to illuminate your page.

Construction of the device is also stellar. Buttons feel solid yet responsive under your thumb, the screen is quick to respond to touch, and the battery cover, which attaches magnetically, feels truly premium.

However, it’s also light, with or without the cover, which is great for comfortable reading sessions anywhere from lying in bed to standing on the train. Usually, lighter devices suffer from feeling cheap, but the Kindle places the weight in all the right places.

A slight bump on the back, under the buttons, gives the Oasis the feeling of a rolled-back paperback, giving you a little something extra to hold onto while you shift in your chair. The bump is also weighted, so the e-reader balances comfortably in your palm.

And flipping the device over to switch hands is a breeze as well, thanks to the built-in accelerometer. While it does take a bit of time to reorient the text, it never broke my concentration. And the screen also never accidently switched position, even as I lay on my side in bed with it nearly halfway turned over.

With the battery cover on, things feel a little more like the standard Kindle experience, but the rough leather provides more grip than the plastic of other Kindles, and the flap folds back and stays in place thanks to a set of weak magnets, keeping the whole setup tidy.

Luckily, you don’t have to keep the battery cover on for long. Ten minutes gives the Oasis an extra hour of reading life. And since it’s included with the Oasis, you’ll probably want to keep the cover on while transporting the device to keep it protected from whatever else may be in your bag.

Speaking of battery life, I haven’t had to plug this thing in after the initial charge when I first got it a little more than a week ago. While the Oasis has been on and off the charging cover, the external battery is still at 64 percent after giving the Oasis a full charge.

Amazon could have gone further

Amazon did some weird stuff with the Oasis. Packaging a battery-extending case is almost unheard of in the gadget world. Obvious asymmetry goes against modern industrial design trends found on almost every device. However, Amazon stopped short of going weird enough.

But I still had to keep a pinky propped under the screen to keep the device from slipping down my grip, just like I have to do on my iPhone 6S. With Amazon controlling every aspect of this device, they could have taken a design cue from the iPhone battery case and added an even better way to grip the device.

See, while one side of the Kindle is thicker, it’s still very thin and you have to grip it to make sure it doesn’t drop. With a horizontal protrusion just like the vertical one already there, the Oasis could rest in your hand even more comfortably. And Amazon could even pack in a little more battery life as well, not that it’s a huge issue.

My other complaint was the lack of an ambient light sensor on the Oasis. The Kindle Voyage has one, so we know Amazon has the technology. But for some reason it wasn’t included in this premium option. That means when your partner turns off the light at night, your Kindle is still glaring, even with the front-lit display. You have to tap at least three times to change it, really pulling you out of the reading experience.

Some Kindle fans on Reddit claim it may be because the Voyage’s light sensor wasn’t very good, pumping up the backlight when a shadow passed the sensor. But that seems like a small problem that could be fixed. The answer is more likely due to limited real estate.

With the Oasis’ tiny bezel, finding the right spot for a light sensor may have been hard. Putting it on the button side of the e-reader would have meant your hand was going to cover it much of the time, and putting a sensor anywhere else may have been impossible without bulking up the other bezels. However, with the premium device, I would have wanted Amazon to find a way.

Or if not, they could have made this thing even smaller. Just like the pulp paperback novels that the Oasis emulates, it would have been great if the Kindle Oasis was small enough to slip in a back pocket. With a screen that flips pages as quickly as the Oasis and buttons that are as easy to push, having to change pages more frequently would have been an easy trade-off for a truly pocketable device. 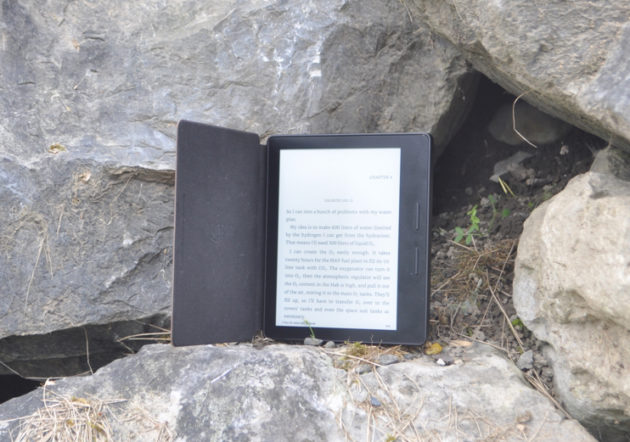 The Kindle Oasis is, without a doubt, the best reading device I’ve ever used. As a digital native, I have long favored digital over physical, but there were always tradeoffs to be made that usually meant it was easier to go with physical media.

For reading books, the Kindle has taken away those worries. It has all the quickness and simplicity of books, along with the ability to carry thousands of them at a time, just like other Kindles Amazon has made. But this one adds a level of comfort that books have long held over e-readers.

Sure, Amazon could have gone further, and I hope they do in future generations, but this is the best way to read a book right now. The only real problem then is the price.

The Kindle Oasis is $290 at the outset, with options to pay $20 more for an ad-free version without “Special Offers” on the lock screen, and another $70 for a 3G-enabled device for downloading books and syncing on the go.

However, that price also includes a battery cover, something the $199 Voyage doesn’t have. And if you’re a big reader and plan to spend the $50 on a Voyage cover anyway, splurging for the Oasis seems like a no-brainer. But if you’re not a huge reader, sticking to the occasional sci-fi novel while riding the subway or taking a flight, saving money and going with the Paperwhite is still the better option.

The Kindle Oasis is available to purchase now, but is backordered until June.