The word “lopsided” was used to described Amazon’s new Kindle Oasis after images of the e-reader leaked online earlier this week in advance of the official unveiling. But within a few moments of picking up the device, it’s clear why Amazon shifted the center of gravity to one side.

The Oasis might look lopsided, but it doesn’t feel that way. It’s balanced for use with one hand, with its weight concentrated directly on the palm, using a layout that effectively creates an ergonomic grip to one side.

Amazon is announcing the Kindle Oasis this morning at a price of $289.99, adding a new high-end option to its lineup of e-readers. The eighth-generation Kindle comes with an updated Paperwhite display, and the price includes a leather charging cover that extends the battery life of the device, snapping snugly into place against the back of the Oasis using magnets.

It’s the latest effort by the Seattle-based company to extend its lead in the market for e-books and dedicated e-reading devices. Amazon, which released its first Kindle in 2007, remains the giant of the industry, responsible for an estimated 75 percent of e-book sales in the United States last year. Amazon competes against tech rivals such as Apple and Google in e-books, and Barnes & Noble and Kobo in e-reading devices.

“We’re investing in this category because we believe it’s still Day One,” said Neil Lindsay, Amazon’s vice president of devices, using one of Amazon CEO Jeff Bezos’ favorite refrains during a demonstration of the new Kindle Oasis at the company’s Seattle headquarters this week. “Incremental improvement isn’t enough for us. The category is still growing.” 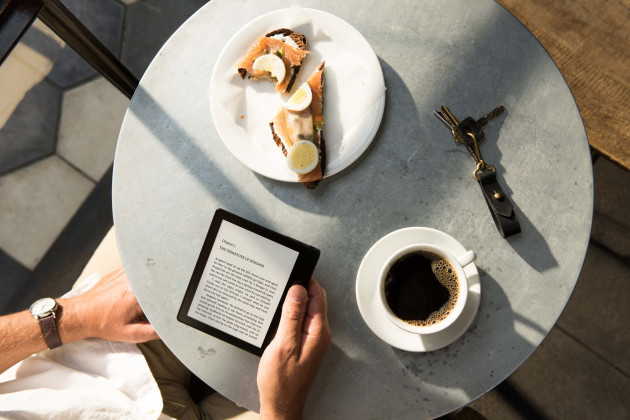 On its own, without the charging cover, the Oasis is 4.6 ounces and 3.4 mm at its thinnest point. Amazon says that’s 30 percent thinner on average and more than 20 percent lighter than any previous Kindle. The Kindle Voyage, by comparison, is 6.7 ounces.

The screen of the Oasis is the same size as the Kindle Voyage, at 6 inches, but the device itself has a smaller footprint. Here are the Kindle Oasis (at left) and the Kindle Voyage (at right) for purposes of comparing the size. 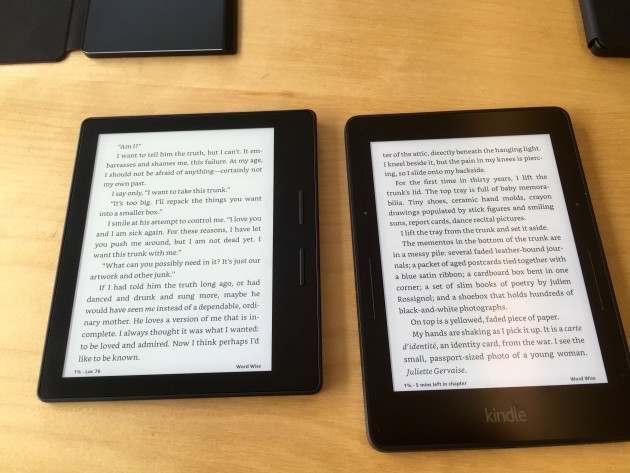 Amazon says the Oasis provides “a couple of weeks” of battery life on its own, which is less than the Kindle Voyage offers, but the addition of the battery cover provides months of battery life, according to the company. The Oasis and the cover can be charged simultaneously through the same port, and 10 minutes in the charging cover gives the Oasis an extra hour of reading life.

The device is also the first Kindle to include an accelerometer. That means it senses when the Oasis is flipped over and automatically changes the orientation of the page accordingly. The programmable hardware buttons for turning pages also change orientation when that happens, so that readers who’ve set the top button to page forward, for example, will continue to use the top button for that purpose. 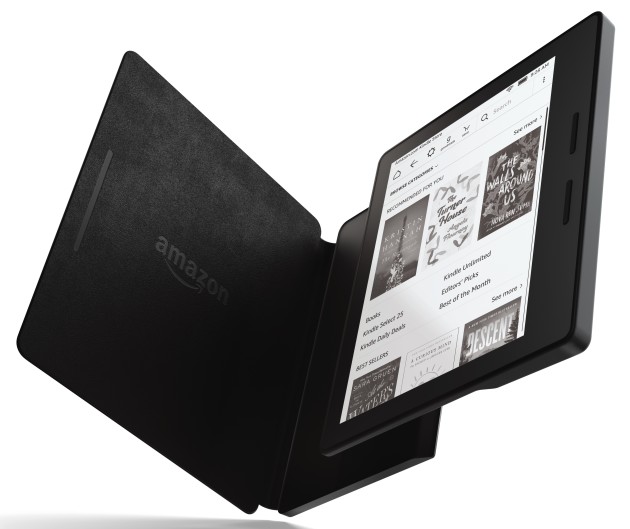 The device uses an upgraded version of the company’s front-lit Paperwhite display, in which the light is spread across the screen and down onto the words to minimize eye strain. The new version of the Paperwhite display has 60 percent more LEDs than previous versions, boosting the brightness, along with new “cylindrical diffractive patterns” in the display that improve the spread of light. In addition, the lights are positioned in the side of the device, rather than the bottom, which creates more consistency in the lighting across the display.

However, the Kindle Oasis isn’t a replacement for the Kindle Voyage, which will continue to be sold along with the company’s entry-level Kindle devices. Rather, the Oasis is a new premium device intended to create a new high-end offering in the company’s lineup.

Kindle Oasis is available for pre-order starting today, and Amazon says it will be available on April 27.