BELLEVUE, Wash. – It’s tough enough to move a laboratory to new digs, but when you add in a world-class kitchen and a state-of-the-art machine shop, you get a sense of the challenge that Intellectual Ventures faced when it had to uproot its Bellevue lab to make way for a light-rail station.

The solution? Today, the invention factory started up by pioneering Microsoft researcher Nathan Myhrvold has its lab in a nondescript 87,000-square-foot building on Eastgate Way, just around the corner and down the street from the main corporate offices.

The exterior may look dull, but the interior is anything but. As the researchers at Intellectual Ventures’ lab make their rounds, they walk past a Rocketdyne H-1 rocket engine saved from the Apollo program … a Tesla coil that can shoot Frankenstein-like sparks in time with a soundtrack … and a working full-scale model of Charles Babbage’s 19th-century Difference Engine.

The curios, as well as higher-tech gizmos for the lab, were moved into the Corridor Building almost a year ago. Over the past few months, Intellectual Ventures has been giving a series of tours for the families of employees as well as media types. Last week it was GeekWire’s turn. Check out the sights in this slideshow: 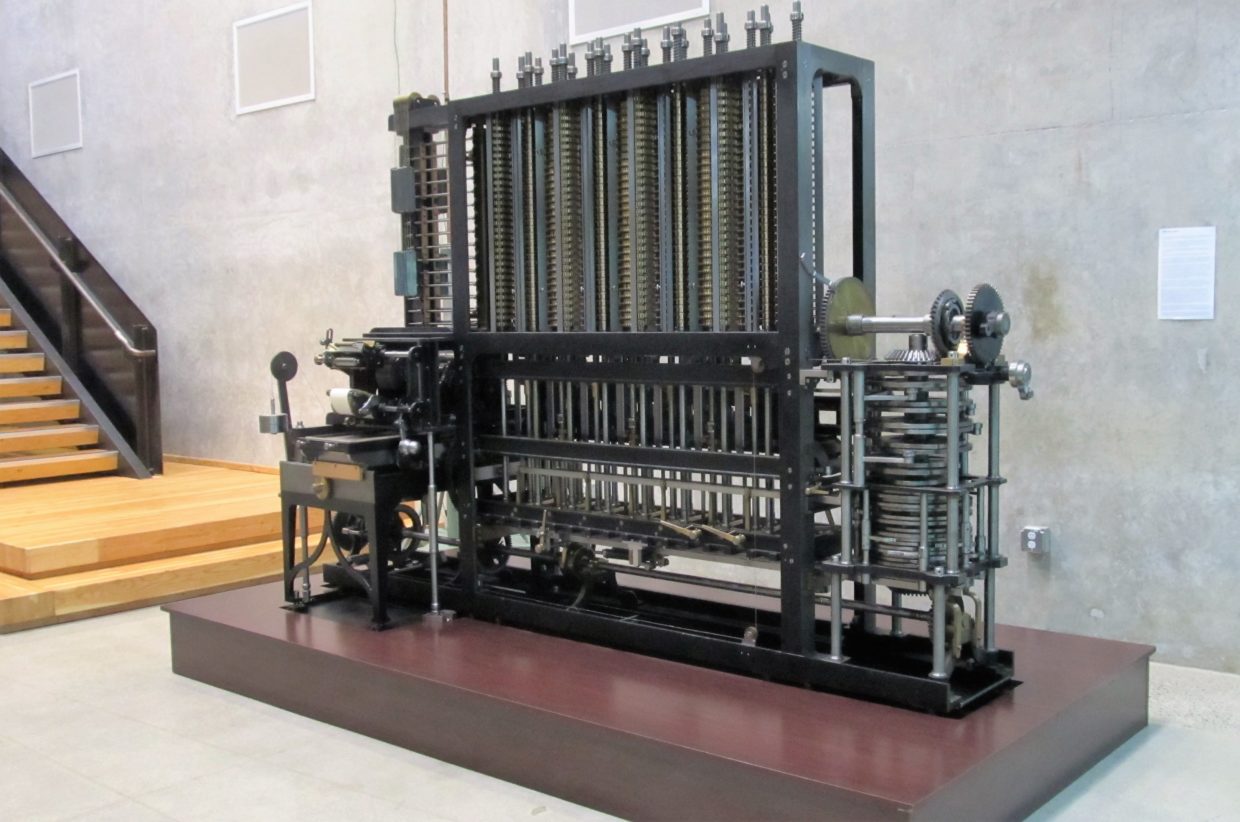 One of the first sights you see inside the Intellectual Ventures lab is a working model of Charles Babbage’s Difference Engine, a 19th-century device for solving differential equations. Some say Babbage’s designs laid the groundwork for the computer age. (GeekWire photo by Alan Boyle) 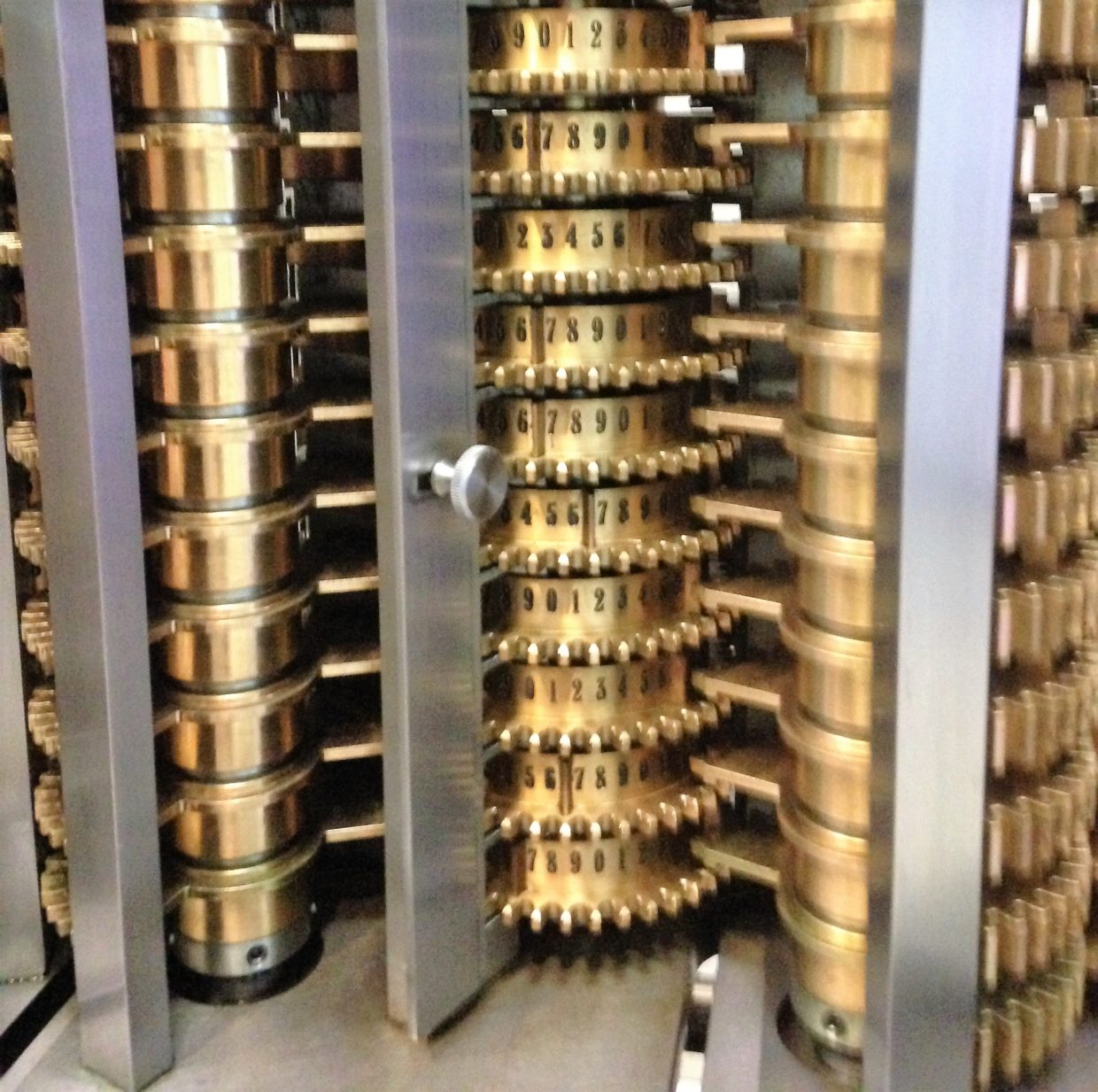 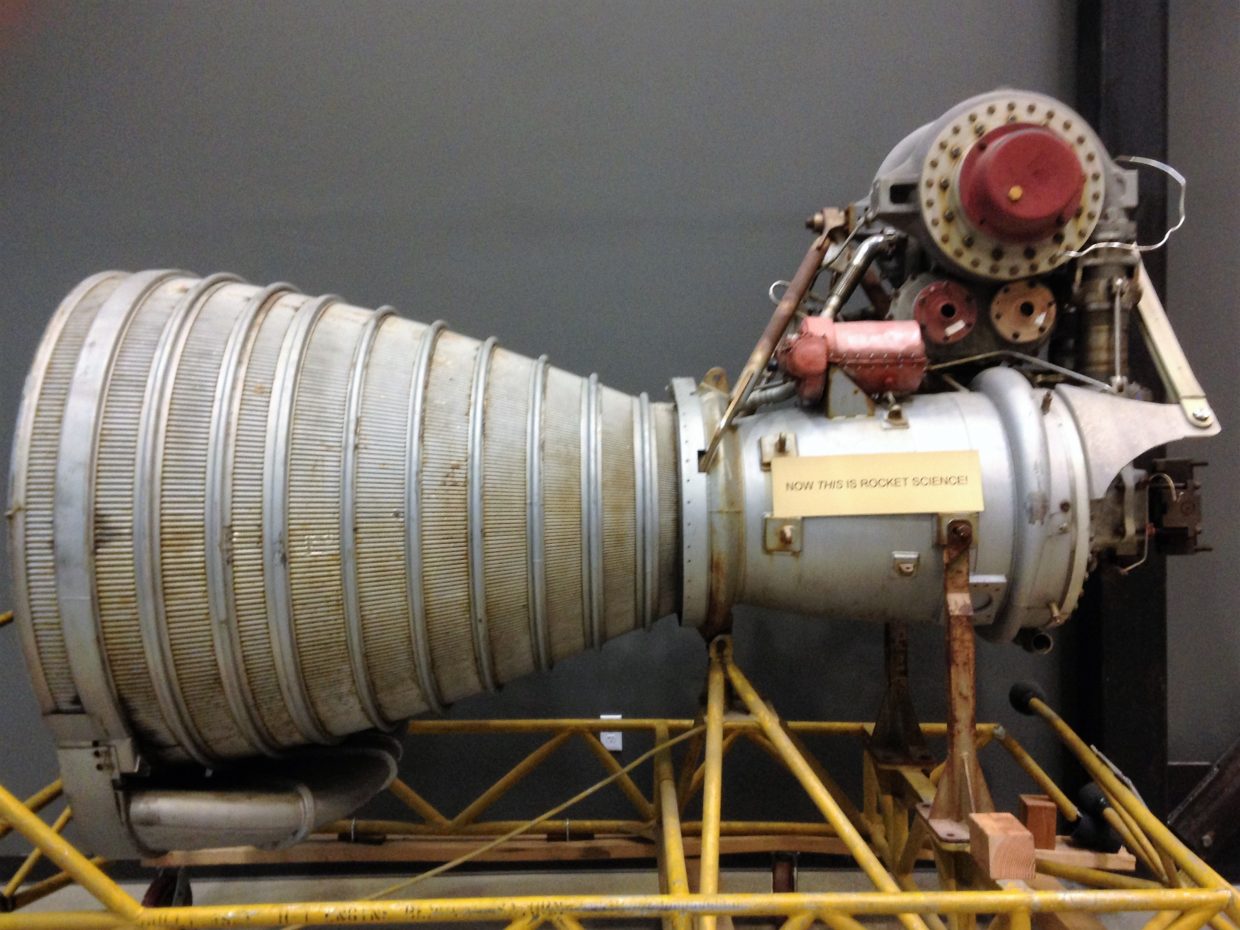 A sign on the Rocketdyne H-1 rocket engine on display in Intellectual Ventures’ lab reads, “Now this is rocket science!” (GeekWire photo) 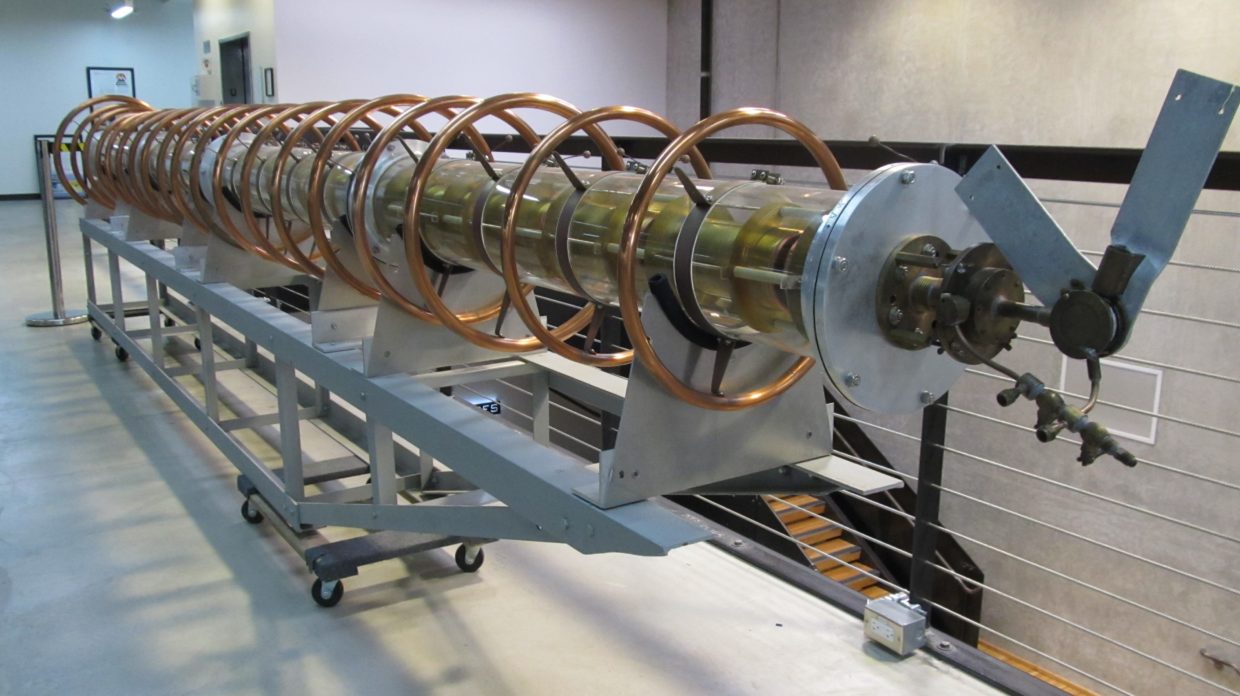 This sculpture on display at the lab was inspired by the linear accelerator designed for the Manhattan Project. (GeekWire photo)

A panorama shows one of the lab work spaces at the Intellectual Ventures research facility. (GeekWire photo) 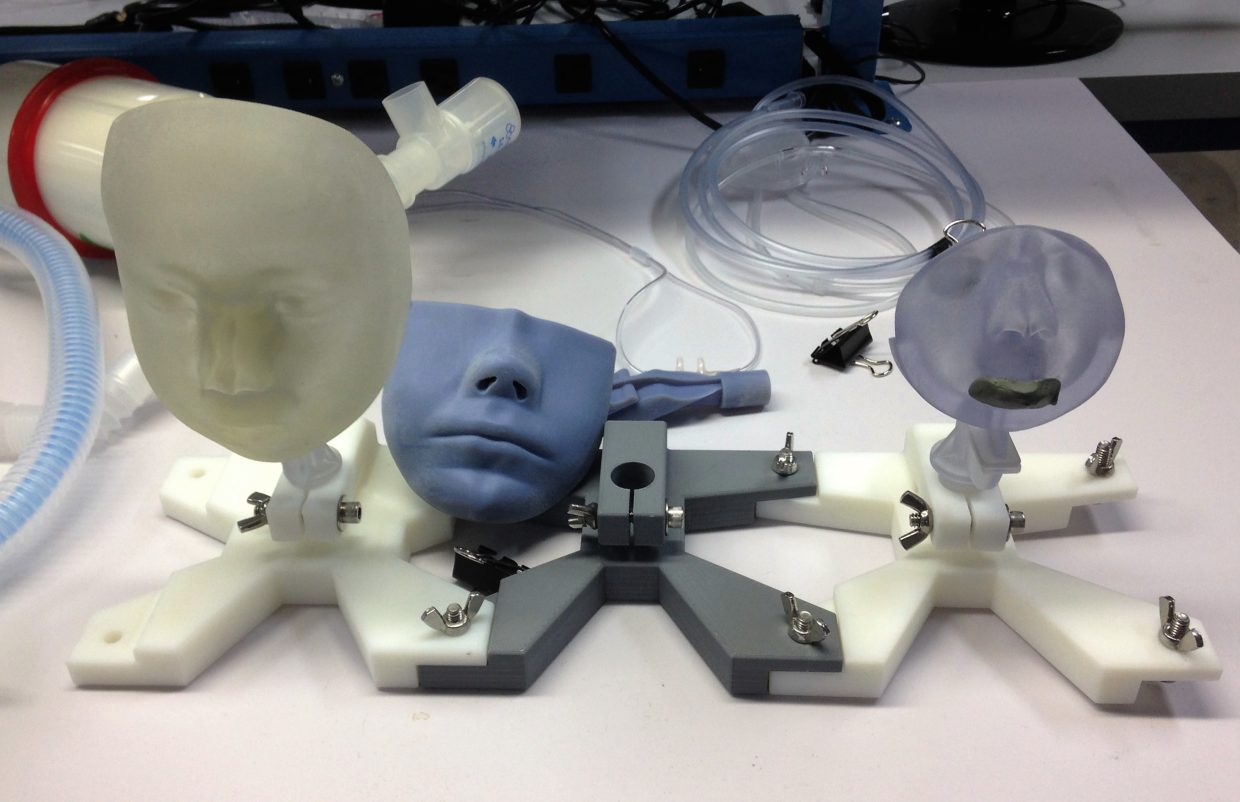 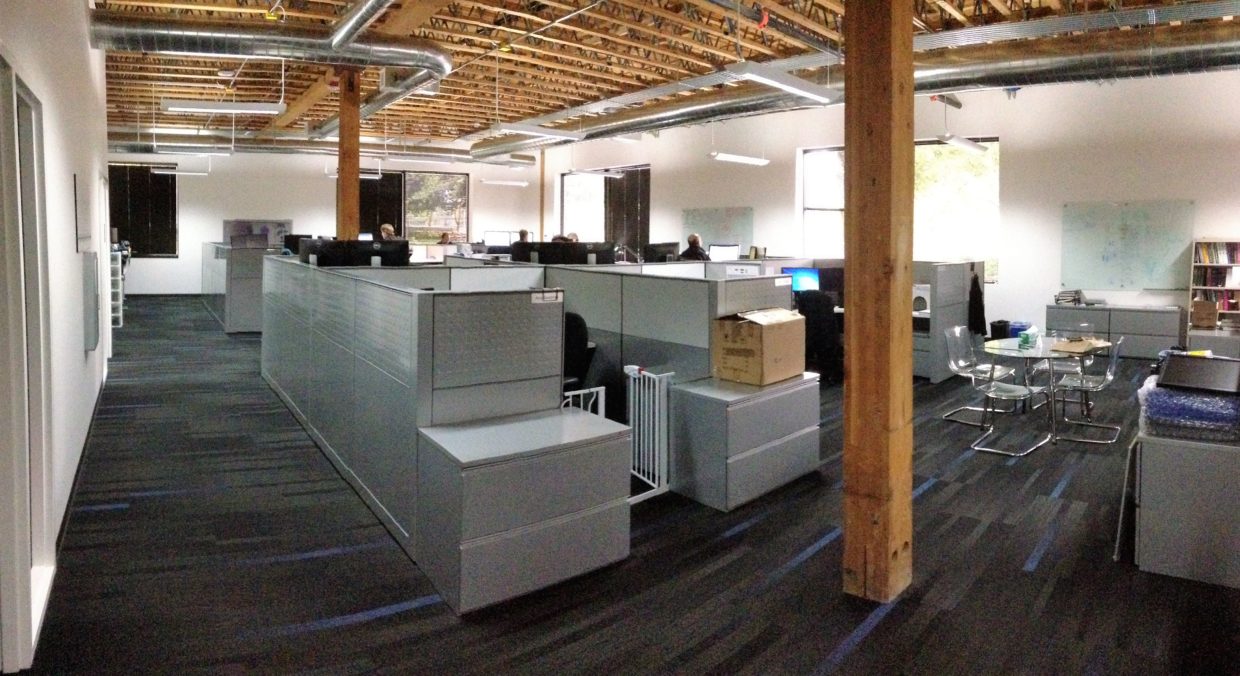 Open office space at the lab is designed to encourage collaboration. (GeekWire photo) 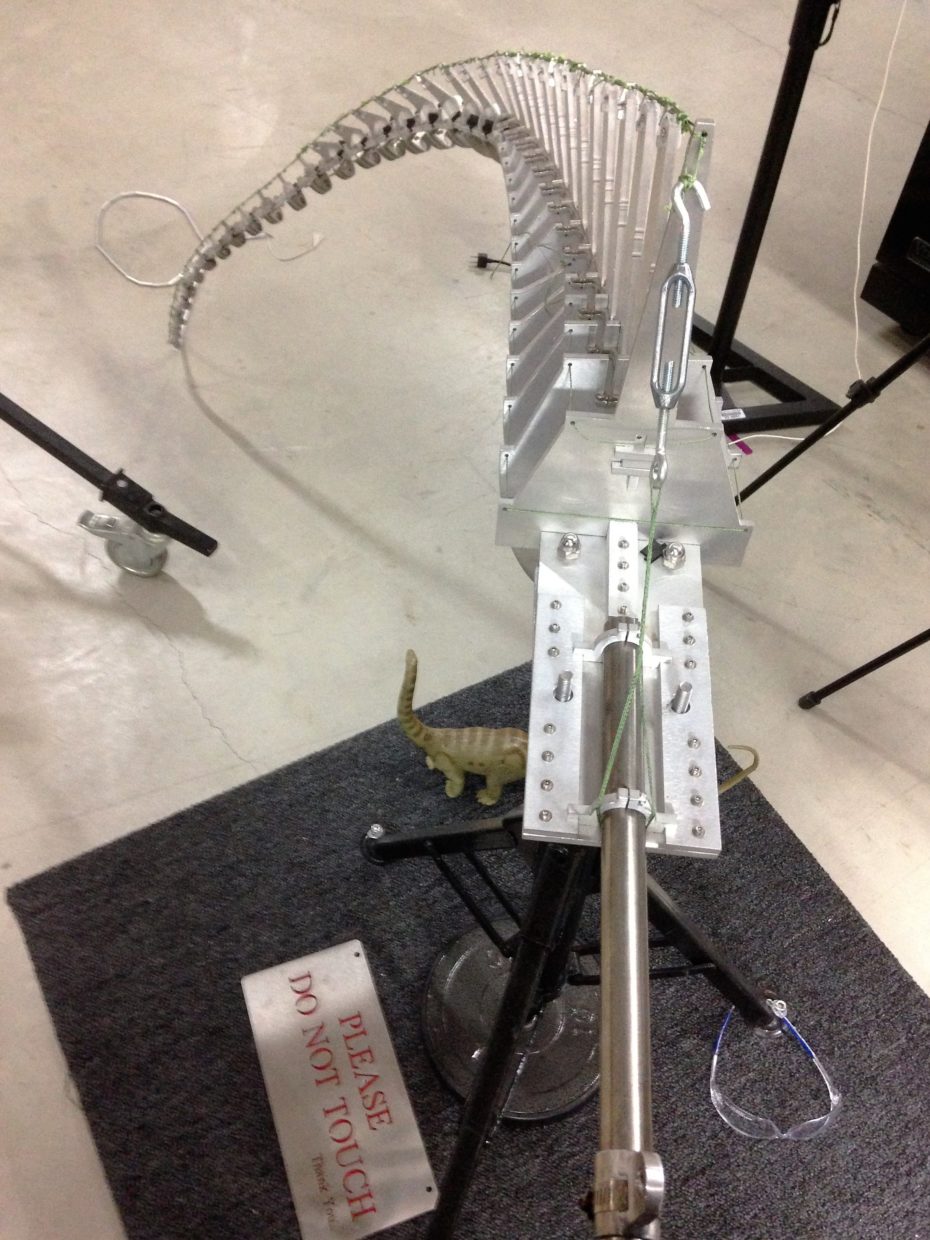 Among the items made in the instrument shop were the metal plates that went into this simulated dinosaur tail. (GeekWire photo) 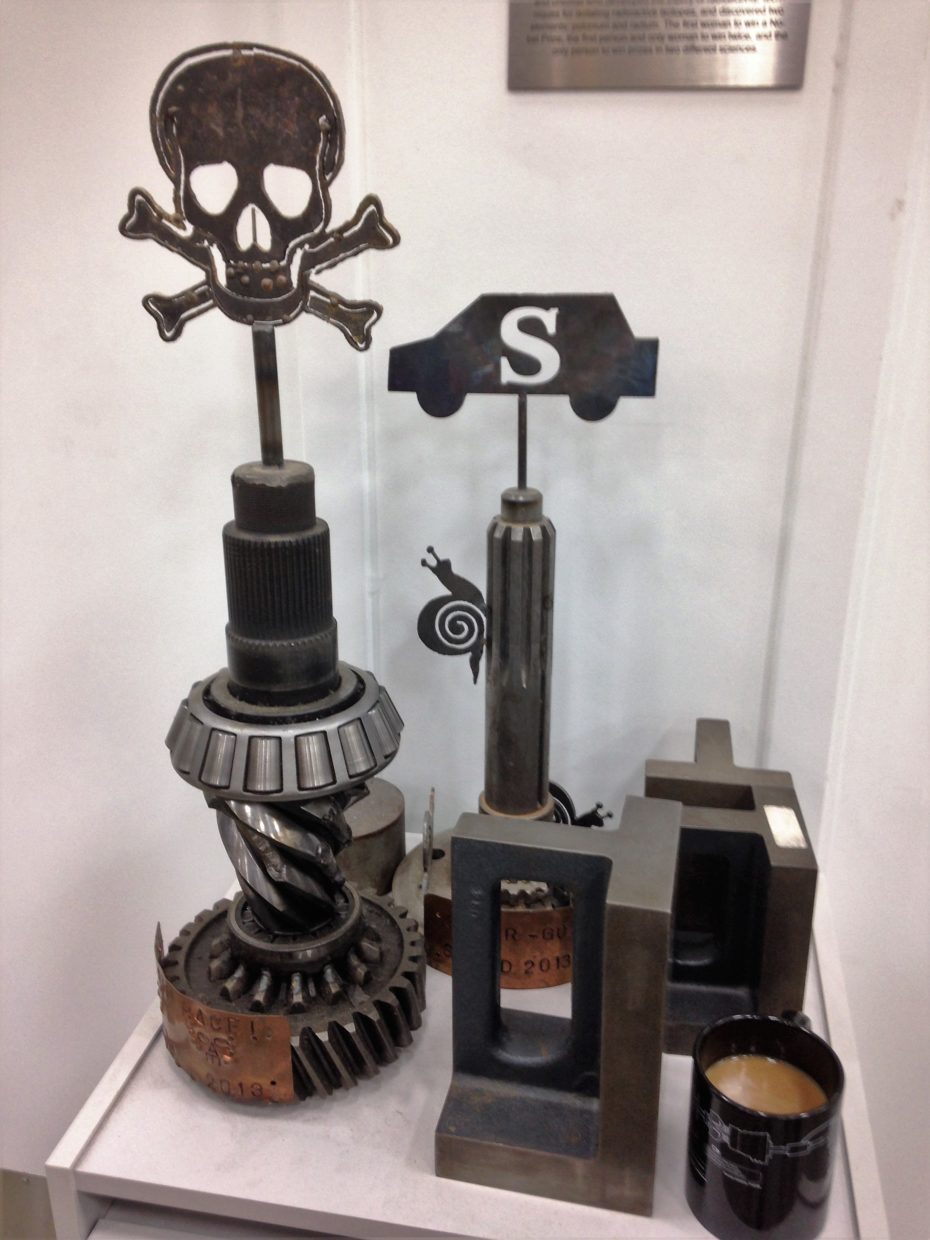 Some of the items created in the instrument shop shouldn’t be taken completely seriously. (GeekWire photo) 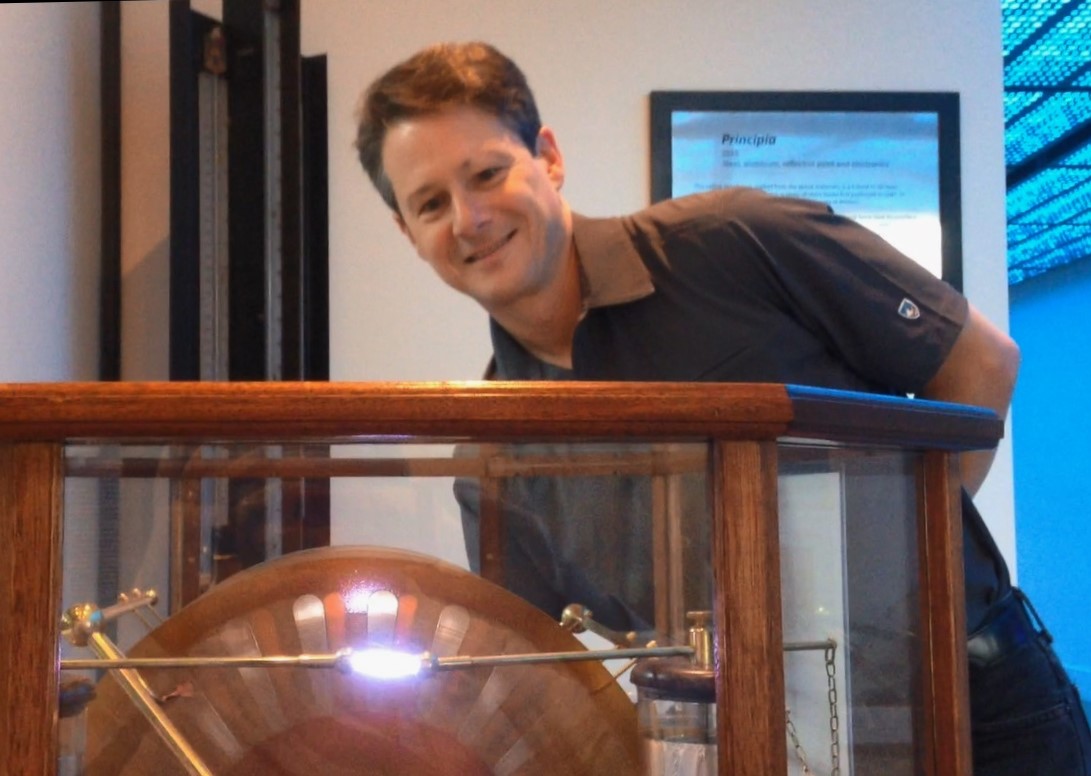 Intellectual Ventures’ Wayt Gibbs generates a spark by turning a crank on a modern re-creation of a 19th-century electrostatic generator. (GeekWire photo) 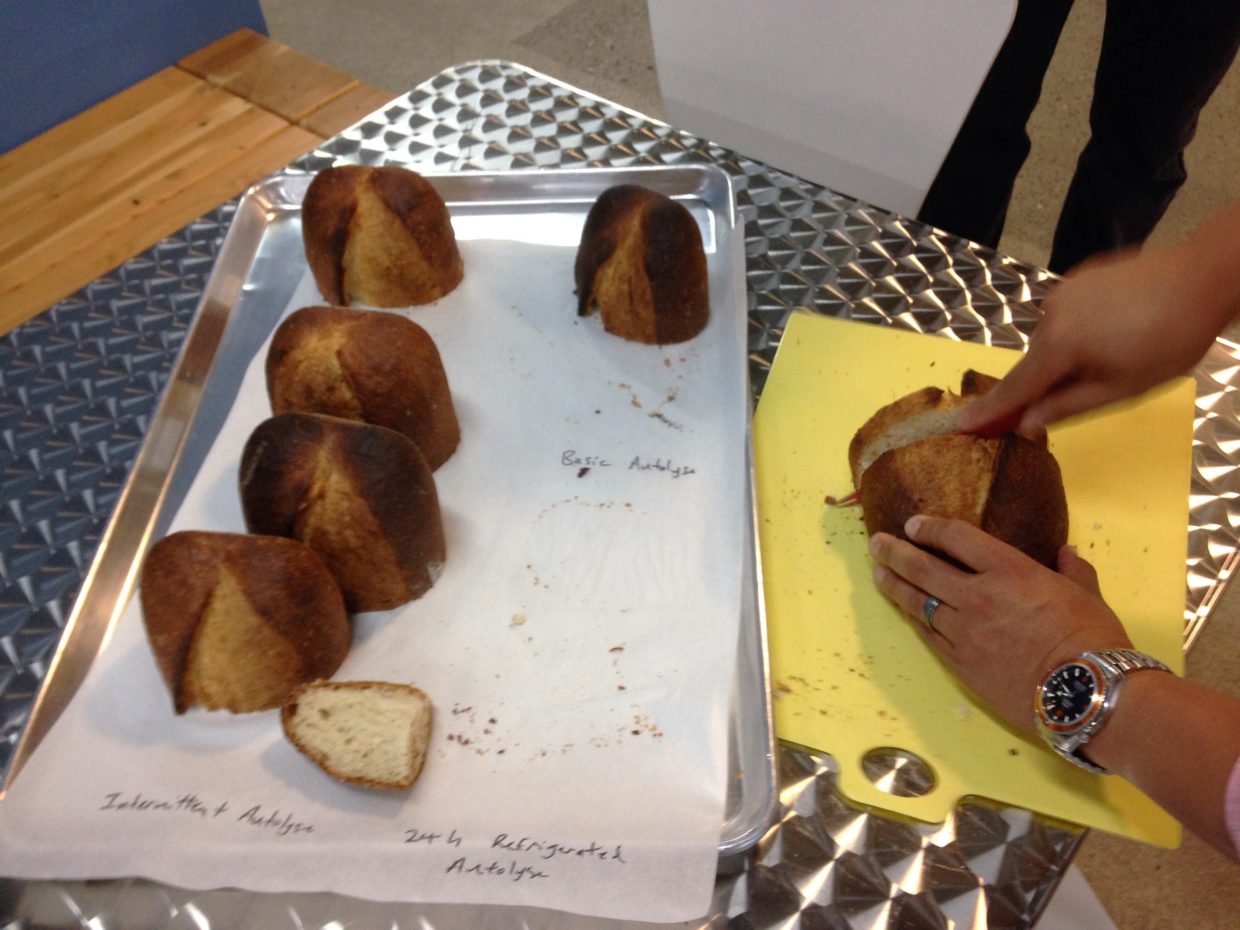 Intellectual Ventures’ tours give the company a chance to counter the dark side of its image – the idea that it’s the “biggest, most aggressive patent troll on the planet” and “the most hated company in tech.”

That idea arises from the part of Intellectual Ventures’ business model that concentrates on buying the rights to promising patents, and then capitalizing on those rights through licensing fees. Wayt Gibbs, the company’s executive editor, refers to the concept as “patent aggregation.”

“If you want more technology, create an incentive for inventors to invent,” he told GeekWire. “We say, let’s do for patents what mutual funds do for stocks.”

Some of the investments may go nowhere. Others could pay off handsomely – that is, assuming that Intellectual Ventures receives licensing fees. That doesn’t sit well with startups who could find themselves either paying the fees or facing a patent infringement lawsuit.

“They really don’t like the idea of paying for … ideas,” Gibbs said.

Another Bellevue-based venture called BlueDot is looking into a slightly different model, in which technologies are licensed from research labs and then turned into commercial ventures. Although Gibbs isn’t familiar with BlueDot, he sees the potential competition as a good thing, consistent with Intellectual Ventures’ view that a full-fledged marketplace needs to be created for intellectual property.

“To do that, you can’t have just one company,” Gibbs said. “You need many companies.”

At the lab, the focus isn’t on aggregating other inventors’ intellectual property, but on creating inventions in-house. Intellectual Ventures says it has filed patents on more than 3,000 of its home-grown innovations.

Some of the lab’s innovations already have given rise to separate ventures, such as Kymeta for flat-panel antennas, Echodyne for compact radar systems, Evolv Technologies for next-gen security scanners, TerraPower for nuclear fission reactors and Modern Electron for heat-to-electric power generators. Those last two companies continue to conduct research at the lab.

Other technologies are being developed with outside collaborators: For example, the lab’s Global Good effort works with the Bill & Melinda Gates Foundation and other partners on computer models that can predict the spread of infectious diseases; smart microscopes that can automate the process of detecting malaria-spreading parasites; low-cost coolers to preserve vaccines and bull semen in parts of the developing world that don’t have reliable electricity; and computer-guided laser zappers that can disable mosquitoes and other disease-causing bugs.

“The model here is to invent specifically to solve the world’s problems,” Gibbs explained.

Inventing isn’t like theorizing: Sometimes you actually have to make things. So the lab’s instrument shop is decked out with industrial-strength gear ranging from 3-D printers, to multi-axis milling machines, to the water jet cutter where the metal plates for a simulated T. rex tail were made.

And then there’s the kitchen: Myhrvold turned the art of cooking into scientific fare in a six-volume, lavishly illustrated cookbook compendium titled “Modernist Cuisine.” Now he’s working on a sequel, tentatively titled “Modernist Bread.” And he’s got a lab-sized kitchen in which to work on it.

On the day of our tour, bakers were whipping up a pastry shop’s worth of delicacies: croissants and pain au chocolat, bagels covered with grains of amaranth, a re-creation of the bread loaves uncovered in ancient Pompeii, and an array of more traditional loaves prepared under different experimental conditions.

Some of the experimental bread ended up being served downstairs in one of the lab’s break rooms. The “basic autolyse” experiment was delicious.

Like a bakery, Intellectual Ventures’ lab blends different scientific ingredients – materials science and nuclear engineering, epidemiology and data analytics – in hopes of creating inventions that are greater than the sum of their parts.

Is the recipe working? In the end, Intellectual Ventures will be judged not so much on the basis of profitability, but on the basis of what it creates. Or, as a connoisseur like Nathan Myhrvold might say, the proof of the pudding is in the eating.

Intellectual Ventures’ Nathan Myhrvold will participate in a Q&A during the 2016 GeekWire Summit, taking place Oct. 4 and 5 in Seattle. Check out the summit’s full lineup of speakers and get more details – including ticket information – on the event page.