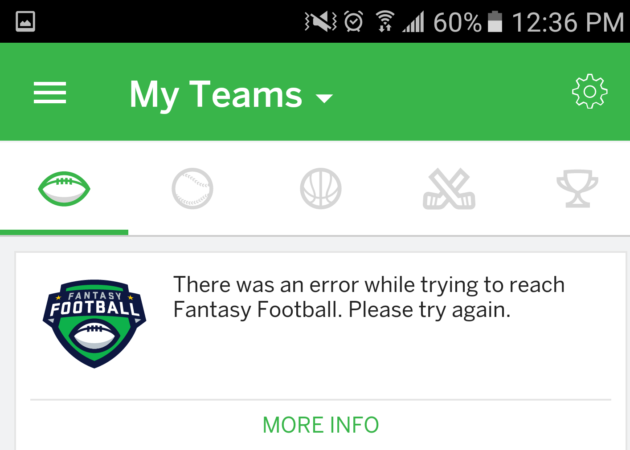 Nope, it’s not just you — ESPN’s fantasy football app and website are down.

On the first Sunday of the 2016-17 NFL season, ESPN suffered “technical difficulties” with both its fantasy football app and website. The issues started just as Sunday’s games kicked off at 10 a.m. PT. As of 12:50 p.m. PT, the problems persisted. Users couldn’t access their team rosters or see updated scores.

We are aware of the current technical difficulties. We apologize for the inconvenience & are working to resolve the issue ASAP.

And at 1 p.m. PT, just before the afternoon games kicked off:

We continue to work hard to resolve today’s technical issues. We appreciate your patience and apologize for the inconvenience.

We’ve reached out to ESPN to find out more details about the problems, and will update this post when we hear back.

Regarding fantasy, we have identified the problem and are working hard to fix it. Updates here and @ESPNFantasy.

Update, 3:30 p.m. PT: The app and website are back for me, and it seems others are now able to access their rosters/scores.

Update, 3:40 p.m. PT: ESPN confirmed that the service is restored. Here’s a statement from the company:

“ESPN Fantasy is restored and we will continue to monitor. We identified a backend data access issue and resolved as quickly as possible. The issue did not impact data for teams, leagues or rosters. We sincerely apologize to all ESPN fantasy users.”

Fantasy Football is restored. We will continue to monitor. Issue did not impact data for teams, leagues or rosters. We sincerely apologize.

Users aren’t happy — including a U.S. senator and an NBA player.

Seriously @ESPNFantasy this is not good. Opening day? Really? #fail

This ESPN Fantasy app is killing me man……

ESPN fantasy football has put a damper on my perfect Sunday ?

ESPN Fantasy Football site crashing, so here I am tallying points on graph paper over candlelight, just like my father's father before him.

The Fantasy Sports Trade Association estimated that nearly 58 million people in the U.S. and Canada played fantasy sports in 2015 — that number has likely grown for 2016. An American Express study last year found that 74.7 million Americans planned to play fantasy football. FSTA also estimates that the average player spends $556 per year on fantasy sports.

It’s unclear exactly how many total ESPN Fantasy Football users there are this year, but ESPN counted more than 1.75 million teams drafted during a 28-hour fantasy football marathon in August.