Recently we invited GeekWire readers to tweet us photos of their “geekspaces” — the places where they really get in the zone. Writer and photographer Annie Laurie Malarkey, who takes pictures for our Geek of the Week feature, explained in the post that she was inspired by her past year of photographing smart people in their work environments, and she wanted to see more. 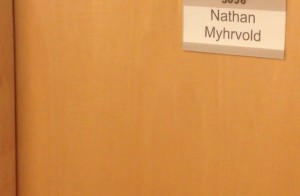 We received lots of responses, including some pretty elaborate setups. But Nathan Myhrvold, the former Microsoft technology chief, has got all of us beat.

Here’s the back story: Last week I went to the Bellevue, Wash., headquarters of Myhrvold’s Intellectual Ventures to meet up with one of the company’s newer executives, Cisco veteran Andy Elder, who heads up Intellectual Ventures’ patent licensing programs. We had a good talk, especially after I drew some parallels between patents and the used car business. (More on that in a future post.)

On the way in, I had seen lots of interesting and eclectic artwork and objects in the Intellectual Ventures hallways. So before leaving, I made sure to get a tour.

Highlights included Myhrvold’s impressive landscape photography, a giant prop dinosaur head from Jurassic Park, a collection of old typewriters filling up an entire wall, and a display of firehose nozzles, of all things.

Then it got really interesting. Midway through the tour, we bumped into Myhrvold himself in the hallway outside his office. He was leaving, but he said it was OK for me to go inside without him, accompanied by one of his staffers.

So what’s it like in there? The very first thing a visitor sees when opening the door to the L-shaped office is the skull of a gigantic, ancient fish — a Dunkleosteus — with a huge gaping mouth that leaves no question about its prehistoric intentions.

How’s that for a greeting?

The rest of the room is filled with antique microscopes, fossils, magazine racks and other geeky paraphernalia. In the far corner Myhrvold has two dual monitors running Windows.

But the real attention-grabber is at the other end of the room — a bookshelf-sized Periodic Table of the Elements, containing actual examples of those very elements (except for the dangerous ones) and some of their derivative products in glass-enclosed shadowboxes.

The collection is also mentioned in this new Men’s Journal cover story on Myhrvold, which portrays the former Microsoft technology chief as geeky genius who foresaw the iPhone — a counterpoint of sorts his portrayal last year’s This American Life/Planet Money piece, “When Patents Attack.”

When people ask Myhrvold if he keeps on hand all the ingredients used in his six-volume Modernist Cuisine scientific cookbook, he likes to point out that he has every single element in his office.

Bottom line: As a geekspace, this one is going to be hard to top. 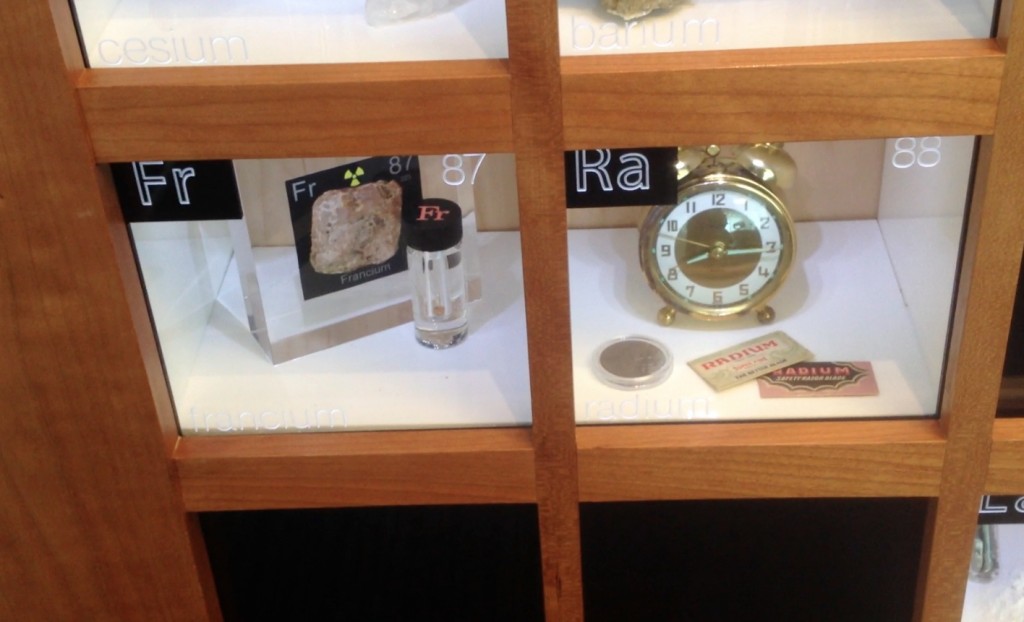